Home»US»More Mockers Dead After Taking The COVID Shots: No More Excuses, Americans – You Have All Of The Information That You Need!
US/Videos

More Mockers Dead After Taking The COVID Shots: No More Excuses, Americans – You Have All Of The Information That You Need!

“Be not deceived; God is not mocked: for whatsoever a man soweth, that shall he also reap.” -Galatians 6:7

One thing that I reiterate when it comes to these said “vaccines” (experimental jabs) is that we have all the information that we need to make educated decisions (Proverbs 4:5-9), and this in spite of the illegalities of what Facebook, Twitter, Google, YouTube and the big tech companies are doing to stifle or censor free speech (Psalm 94:20).

Yet, there are still those who want to mock the people that do, in fact, know better when it comes to taking the experimental jab and why? It’s because they have taken the time to look beyond what they are told by those who are paid to lie and to not tell the truth in the mainstream media and their “useful idiots” (John 8:44).

A 57-year-old West Virginia Woman died after a very strange turn of events.

Kim Jarvis declared on August 29th, “I am vaccinated.” She did not state which brand of vaccine she received, nor did she specify the date that she got the injections. Her Facebook posts did not reveal any further information. However, it really does not matter which jab she received as they are equally as bad as each other.

In a Facebook post, Jarvis admitted that she wasn’t aware of what was actually in the vaccine, also stating that she doesn’t know what’s in a Big Mac or hot dogs, but suggested that she eats them anyway. Of course, beyond broad, ambiguous generalisations, nobody really knows what is in these mRNA and viral vector DNA vaccines. 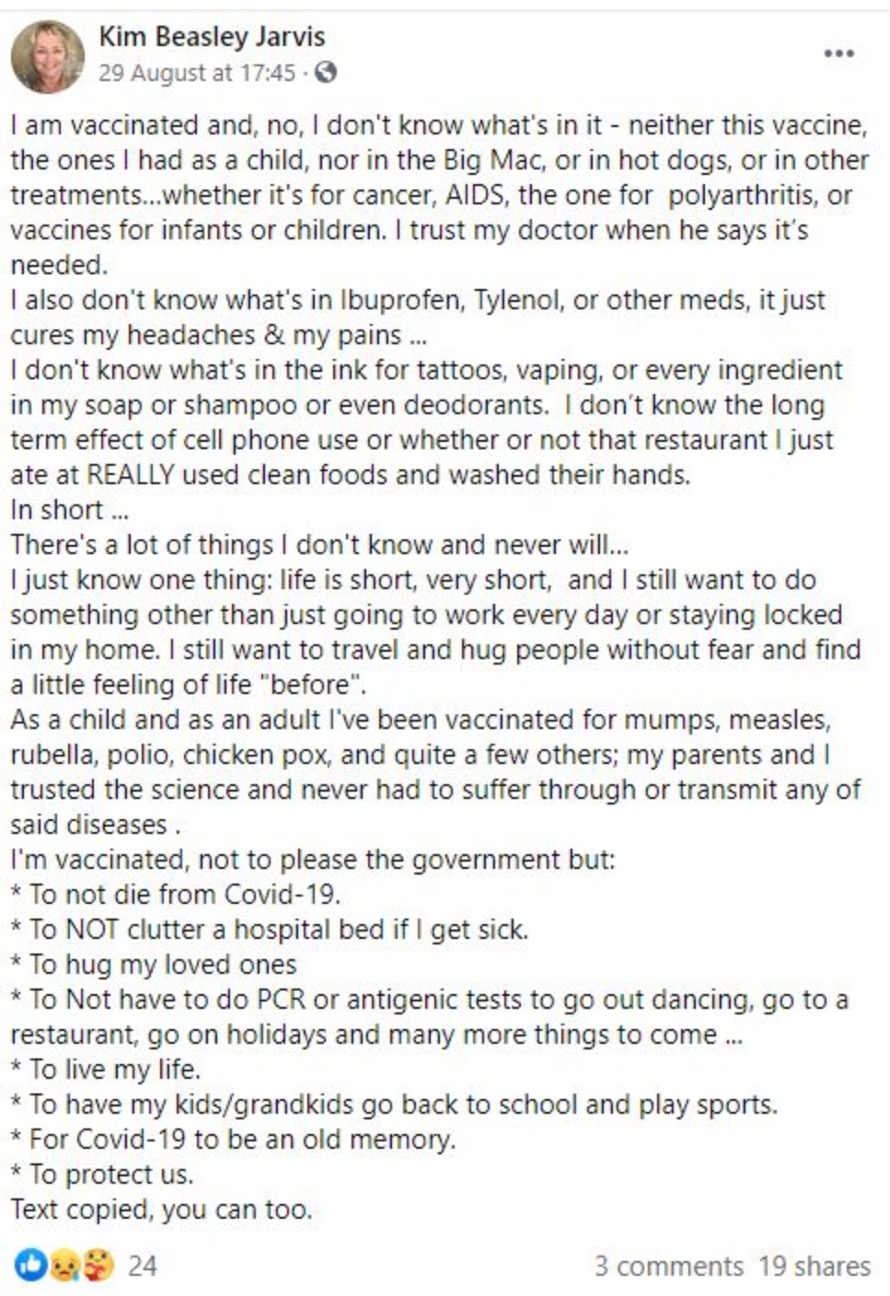 The post continued, stating that she isn’t aware of what’s in other products such as shampoo, tattoo ink, or Tylenol. But she said that she wants to travel and “protect us”, and “trusted the science” for all other vaccines and “trusted [her] doctor” when he recommended the Covid-19 vaccines. Whilst this is a copypasta making its rounds on Facebook amongst many jab recipients, it’s still sad and odd to see it being posted.

Just a day later on August 30th, Jarvis shared her usual missing dog posts, where her last post was at 7:17 pm local time. She apparently visited her daughter Heather’s house later that night, where she told her “I love you” and “I’m so glad you’re home safe.” The following day, Heather posted an update to Facebook, announcing that her mother had “passed away unexpectedly in her sleep” that night, hours after she saw her.

ORLANDO, FLORIDA — A 67-year-old former Notre Dame professor is dead, in what is fast-becoming a pattern of quick deaths after “booster” shots.

Mrs. Karen Croake Heisler received her first dose of Pfizer experimental mRNA on January 13, according to her Twitter account. Her age allowed her to be one of the first to receive the injections in December and January. It’s unclear when she received the second injection. But Mrs. Heisler declared on April 9 that she and her husband suffered only sore arms after their second injections.

Mrs. Heisler was a passionate, hardcore supporter of anything related to masks and COVID-19 mandates. She also displayed consistent animosity towards those who refuse to receive mRNA and viral vector DNA injections. She called non-vaxxed people “selfish” and ordered them to stay home “until you come to your senses.” 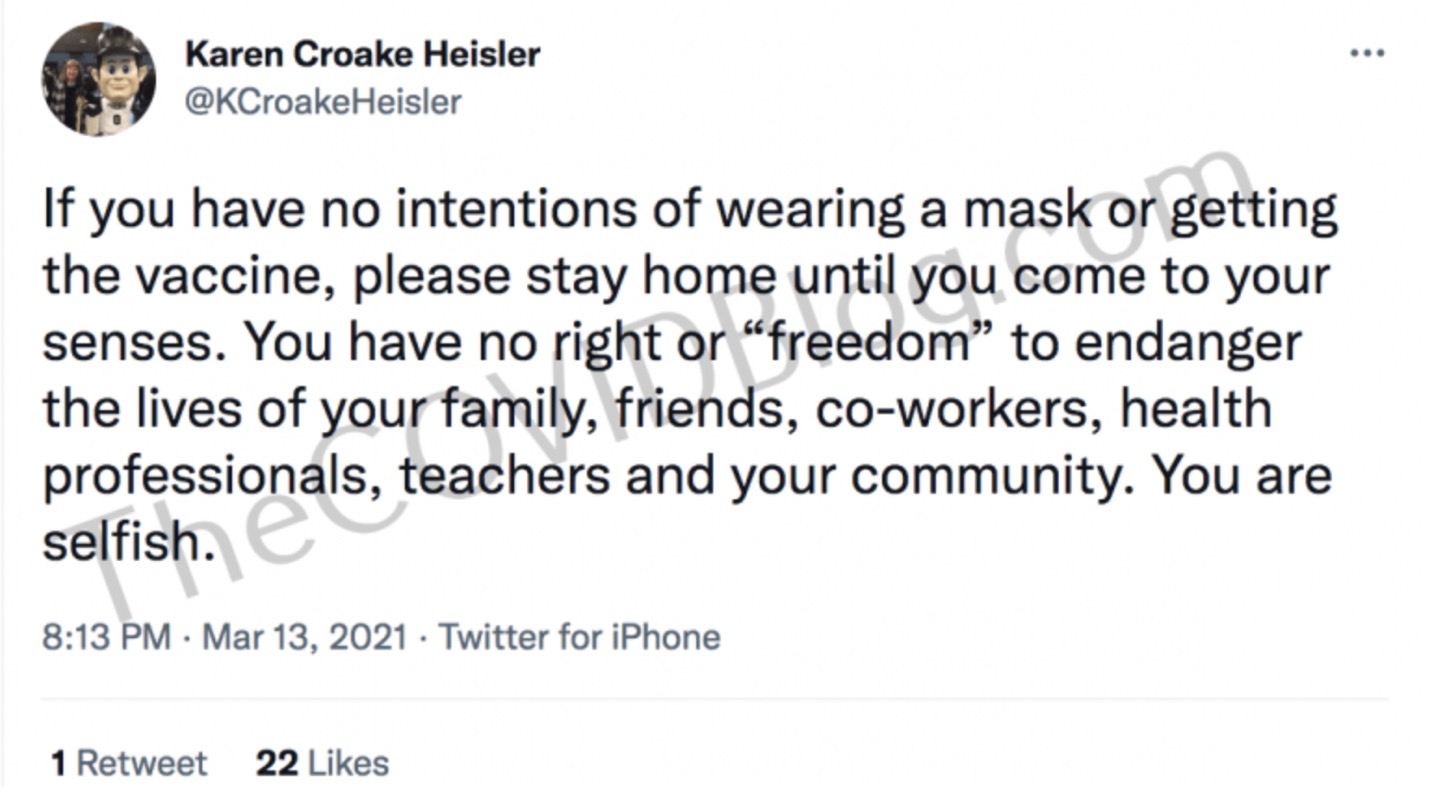 Her health apparently deteriorated very quickly thereafter. Mrs. Heisler tweeted from Orlando Regional Medical Center on September 14. She was there to see a cardiologist. Mrs. Heisler tweeted three times that day, with all of them blaming the “unvaccinated” for her deteriorating health. She went out swinging, telling everyone to “get the damn vaccine” and “damn the unvaccinated.” 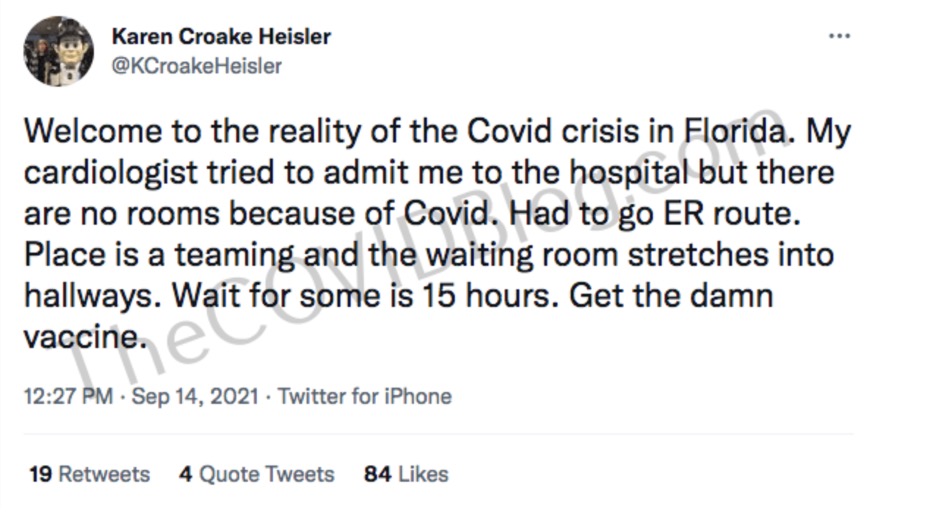 More Mockers Dead After Taking The COVID Shots: No More Excuses, Americans – You Have All Of The Information That You Need!