Canadian Prime Minister Justin Trudeau is demonstrating his panic by going into isolation until after the weekend. Video reports are coming in of the first 1,000 trucks of the Canadian convey arrived in Ottawa on Thursday just as Trudeau made an announcement about self-isolating himself.

First, here’s what Trudeau, a man that is considered “fully vaccinated,” tweeted out to his worshipers. 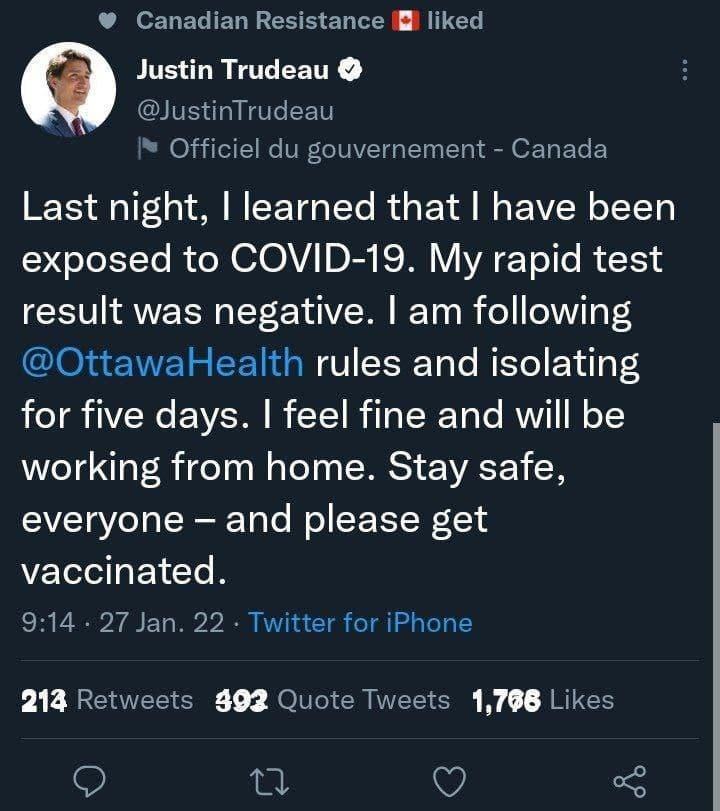 “I feel fine and will be working from home. Stay safe, everyone – and please get vaccinated,” Trudeau tweeted, claiming that he was exposed to COVID-19. Riiiight!

No, he is soiling his pants that 1,000 truckers are in Ottawa and tens of thousands are coming behind them… and the Mockingbird media isn’t covering any of it, which means that he might just be in really big trouble.

Remember, this guy wants truckers to isolate for two weeks when crossing the border!

Here’s a video clip of those first trucks arriving in Ottawa.

Here’s a video montage of trucks making their way towards Ottawa and arriving.

On Wednesday, I provided a ton of clips in an article titled: The Canadian Truckers Convoy For Freedom Is Getting Major Support From The People… & Now US Truckers! (Video)

I also provided a couple of video clips, including women supporting the truckers by making sandwiches for them, as well as truckers from South Carolina, on The Sons of Liberty Radio on Wednesday.

This is very exciting to see the people standing and pushing back against the tyrants instead of rolling over. Just wait till this weekend when they all roll into town!

Crypto Owners Red Alert! Biden Is Going To Use New Unlawful Executive Order To Come After You