Home»US»As The Economy Burns, The Political Class Is Patting Themselves On The Back For Provoking WWIII
US/Videos

As The Economy Burns, The Political Class Is Patting Themselves On The Back For Provoking WWIII

According to the Oxford dictionary, a recession is defined as a period of temporary economic decline during which trade and industrial activity are reduced, generally identified by a fall in GDP in two successive quarters. In the last two quarters, the United States has experienced an economic decline and subsequent contraction of gross domestic product — indicating that we are indeed in a recession.

Despite this factual data which meets the long-accepted definition of recession, the establishment media and political class are assuring Americans that we are not in one.

“That doesn’t sound like recession to me,” president Joe Biden said last week when he spoke to reporters, prompting the media and “fact checkers” to come to his defense.

I sure am thankful for all the politicians and corporatist media pundits who saved the United States from a recession by redefining what a recession is. Not sure where we would be without them. Thank you for your service!

Regardless of the semantics at play, Americans at large, are suffering. With inflation at a four-decade high, insane gas prices, and low unemployment, the political class is having a hard time convincing people otherwise and 7 out of 10 Americans already feel like the country is in a recession and that is according to a survey back in June by AP-NORC Center for Public Affairs Research. It has likely gotten worse now.

Instead of attempting to suppress the flames of the dumpster fire that is the US economy and pulling on the reins that is driving it off a cliff, the American political class is doing what they do best — WAR.

As the State Department continues to pour money on the quagmire in Ukraine, ensuring more mass suffering and death for Ukrainians, they have taken up a new cause that could prove to be the catalyst behind global nuclear annihilation. That cause is China.

It's not just critics who say that US policy in Ukraine is to fight Russia to the last Ukrainian.

Here's @LindseyGrahamSC saying that as long as the US arms Ukraine, "they will fight to the last person." And four months in, he says, "I like the structural path we're on here." pic.twitter.com/1fntZG7cjQ

On Tuesday, U.S. House of Representatives Speaker Nancy Pelosi arrived in Chinese-claimed Taiwan aboard a U.S. military aircraft. This visit was in spite of China issuing grave warnings, up to an including “dire consequences.”

“Our congressional delegation’s visit to Taiwan honors America’s unwavering commitment to supporting Taiwan’s vibrant democracy,” Pelosi said in a statement shortly after landing. “America’s solidarity with the 23 million people of Taiwan is more important today than ever, as the world faces a choice between autocracy and democracy.”

She failed to mention that this ostensible “solidarity” could be the catalyst for causing those 23 million people mass suffering and death in the very near future. 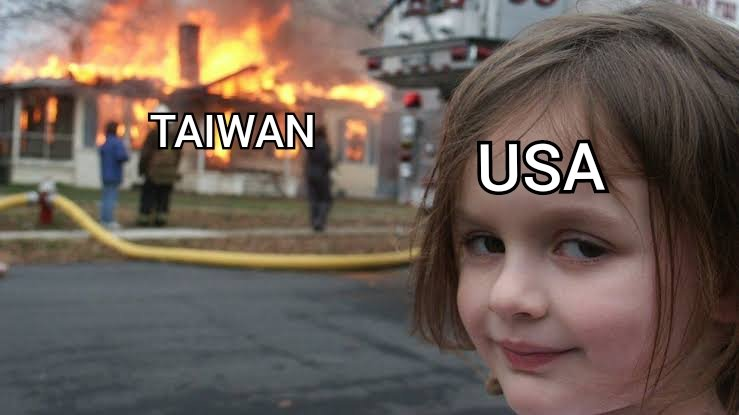 “Pelosi’s visit to Taiwan will be a gross interference in China’s internal affairs and will lead to very serious events and grave consequences. This is the last warning,” the Chinese Foreign Ministry, Zhao Lijian, said in a press release.

On top of grave warnings like the one from Lijian, while the Western-backed media showed Pelosi arrive at the Taipei airport with people welcoming her, they failed to report on the countless other protestors from Taiwan, who do not want the US interfering in their affairs.

Seems like maybe, just maybe, we should rethink catastrophic global destruction over a politician's visit to a country where a significant portion of the population hates her & the US.

Is a photo op in Taiwan really worth potentially setting off global nuclear annihilation? Meh? https://t.co/deJjkHBJzr

Thanks to the tensions sparked by Pelosi’s visit and the subsequent response from China, WWIII began trending again on Twitter.

It is utterly mind-blowing that the same people who claim they can defend Taiwan from China in a nuclear standoff that could result in the end of humanity as we know it, are the same people who can’t even keep China from buying up mass amounts of farm land and residential property in the United States.

These same people claim that they can protect a country 7,000 miles away, yet they are completely unable to protect this country, in which they reside. That’s because their mission is only to protect their interests and the special interests who fund them.

It is not a coincidence that #Raytheon began trending shortly after Pelosi landed in Taiwan.

The elite are warning of a coming food shortage, a collapse in the supply chains, and UN Secretary-General Antonio Guterres just said that “humanity is just one miscalculation away from nuclear annihilation,” and instead of attempting to correct any of these courses, the American political class is making moves ensuring they will all get worse.

As the late great Tupac Shakur once said, “they got money for war but can’t feed the poor.” These words still ring true decades later.

This Will Explain The Illegal Censorship: Former CIA & FBI Playing The Moderators When It Comes To Social Media Content (Video)

As The Economy Burns, The Political Class Is Patting Themselves On The Back For Provoking WWIII