Now it’s just blatantly obvious there was a cover up in Michigan, from the local all the way to the state level, over their lead-tainted water.

Check out this leaked email from the Michigan Department of Environmental Quality (MDEQ) sent back in 2008: 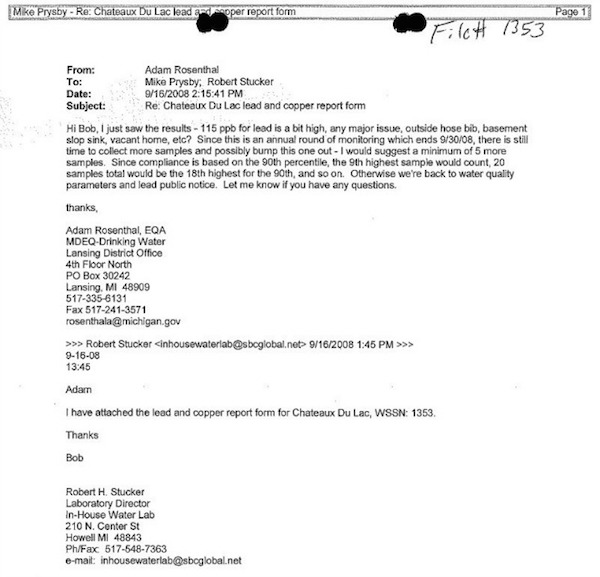 The email was sent in response to a test result that showed one home’s lead levels were ten times the federal action level of 15 parts per billion, and urged the lead test technician to take an additional set of water samples to “bump out” the high result so that the MDEQ wouldn’t be required to notify the community of the high levels of lead in its water.

“Otherwise we’re back to water quality parameters and lead public notice,” complained Adam Rosenthal of the MDEQ’s Drinking Water office in the email.

So for years, these people just let Michigan residents continue to drink poisonous lead-tainted water like it was no big deal la ti da.

Three MDEQ employees have recently been charged in attempting to cover up Flint’s poisonous, lead-tainted water, and two people have died surrounding the controversy, but the emails just go to show that the level of corruption surrounding the case is by no means restricted to the local level.

As we know, Sebring, Ohio residents weren’t warned of their lead-tainted water for months. How many other cities are like this right now and we don’t even know it?

Article posted with permission from The Daily Sheeple. Article by Melissa Dykes.

Constitution Party Presidential Candidate Darrell Castle: “We will all love our Slavery as Today’s Freedom Lovers die off.”

VIDEO: Muslim prayer hall blown up in Russia after POLICE FIND EXPLOSIVES INSIDE