Home»US»Citizens For Free Speech: Mandatory Facemasks Are An Egregious Violation Of The First Amendment… & It’s Potentially Harmful To Your Health
US

Citizens For Free Speech: Mandatory Facemasks Are An Egregious Violation Of The First Amendment… & It’s Potentially Harmful To Your Health

I simply will not comply.  I’m not complying with vaccines, facemasks, public schools for my children, the taking of my property, including guns or any other lawlessness this tyrannical beast should see to impose, whether by the DC beast or the SC beast.  The Citizens for Free Speech are also speaking up about the tyranny and violations of the liberties of the people by those who swore an oath before God and man to protect the very liberties they are attacking.

In an email from Patrick Wood of Citizens For Free Speech, he writes, “At CFFS, we believe that political mandates for wearing facemasks are an egregious violation of the First Amendment as well as potentially harmful to individual health.”

Wood didn’t just say it based on nothing.  Rather he added that the organization had taken great pains to defend their position via highly documented medical reports such as the ones below. 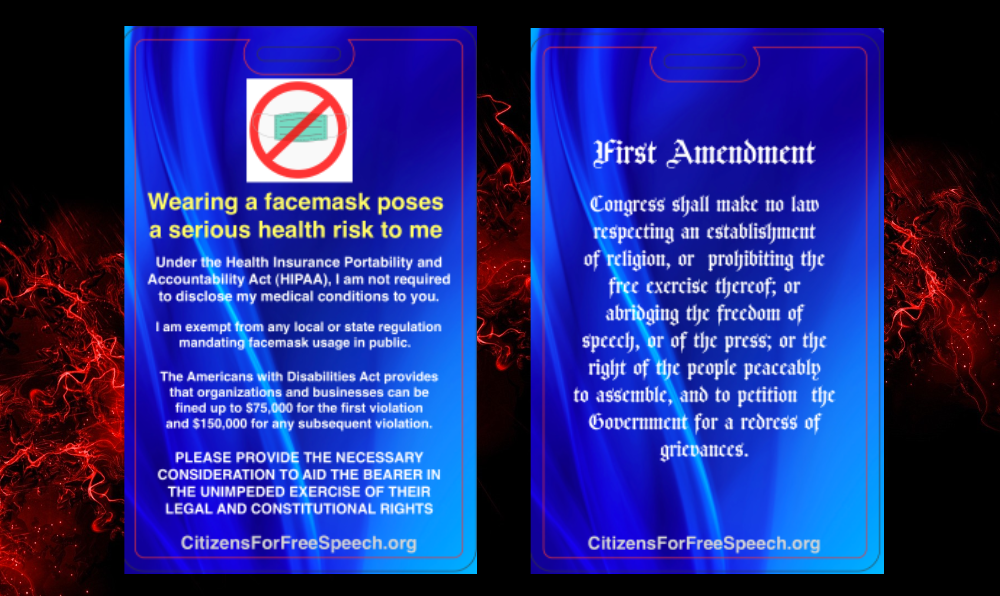 Wearing a face mask has become a national symbol of fear and submission to government authorities. Simply not wearing a mask does not become a symbol of resistance, but proactively wearing the “No Mask” card is such an anti-symbol.

Our cards are showing up all across America and they are already gaining a widespread visual recognition in many communities. In other words, it is becoming the symbol of personal choice and resistance to medical tyranny.

We believe that every citizen should be responsible for their own health and make their own choices as to how to best accomplish that.

He also says that he wears his card, which points to the law so that tyrants, no matter who they are, will know that they are engaging in lawlessness by requiring a mask anywhere.

“I have not worn a facemask since the lockdowns and mandates started,” writes Wood.  “When challenged, I am respectful and calm. Many other people are reporting successes as well.”

“However, it’s more than just about you and your health,” Wood adds.  “By wearing the ‘No Mask’ card you are making a public statement that you will not comply with draconian, unconstitutional and in many cases, lawless mandates commanding you to wear one.”

He then encourages people to “use it as a conversation starter.”

“The First Amendment is printed on the reverse side, and when you read it to some people, it may be the first time in their life that they ever heard it,” he concluded.

There is no reason to be bullied or shamed for not wearing a mask.  If anything, those wearing them should be shamed for not educating themselves and standing against tyranny as their forefathers once did.

So this young woman, mask under the nose and I will let others decide if she understands good health herself … decides that she is not excepting government exemptions. pic.twitter.com/osduqdsr4z

Governor Gavin Newsom Shuts California Down Again - Everything But Protests

Citizens For Free Speech: Mandatory Facemasks Are An Egregious Violation Of The First Amendment… & It’s Potentially Harmful To Your Health