Home»US»Coronavirus Exposed As The Hoax It Is! Can’t Be Spread Person To Person As The Problem Is The Immune System, Not A Virus
US/Videos

Coronavirus Exposed As The Hoax It Is! Can’t Be Spread Person To Person As The Problem Is The Immune System, Not A Virus

As with anything, you live and you learn.  It’s called educating yourself.  When we first heard of the coronavirus, some of us, including myself were somewhat skeptical, but not having vast amounts of medical knowledge and such, we posted articles written by others regarding numbers and reports.  However, over the past few weeks, I have learned quite a bit from doctors and a few nurses.  One of the main things is that we have viruses both in us and on us and around us all the time.  Yet, many never get sick.  So why is that?

Well, this is what I want to present to you for your consideration.

And as I present it, know this, there will not be any more coronavirus articles on here that indicate that it can be spread from person to person because quite simply, I didn’t know that was the case because I was taught those things from an early age.  Now, I do, and the results will be to not only expose the lie that the Trump administration, Republicans, Democrats, health “experts” and the media have put to us and call on the people to deal with these people who should know better, and probably do, but they lie to us anyway.

With that said, here’s a video that I watched on the subject.

Tell me if you don’t think this makes far more sense than what we are being told.

Then, there is Richie from Boston, and listen to his Christian admonition regarding this very thing as he drives all across the united States.

Additionally, understand that even the United Kingdom government has even said that COVID-19 “is no longer considered to be a high consequence infectious diseases (HCID) in the UK.” 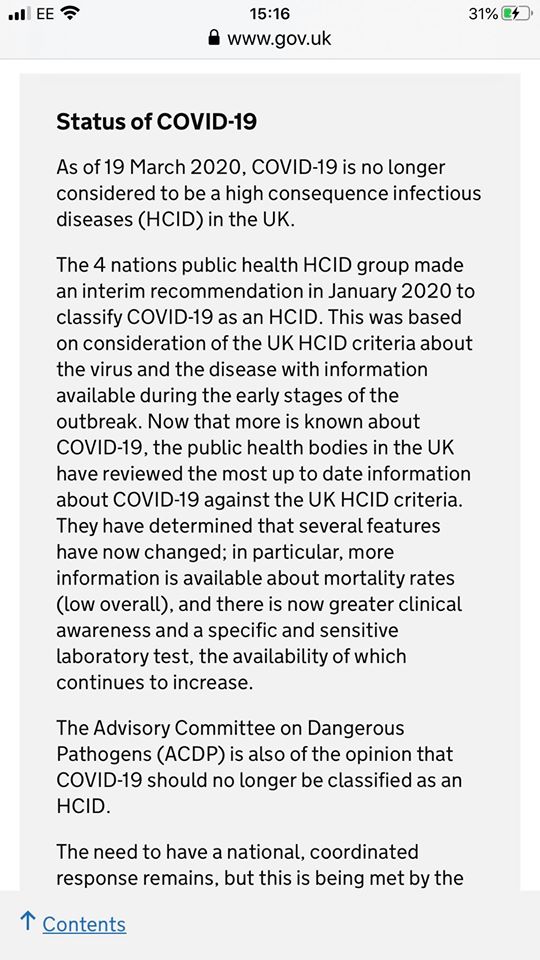 Yet, they are still rolling tanks and troops into the UK and demanding people stay in their homes or be threatened with fines or arrest.  Why?

Because it isn’t about a public health issue.

The Coronavirus Hoax: It’s Not About Liberty, It’s About Tyranny

Then there is former Texas congressman Dr. Ron Paul.  He recently exposed the hoax of how coronavirus is being used.  Now, I don’t know if Dr. Paul knows or agrees with the above videos, and that could be due to his training in modern medicine, but he can spot the lawlessness and tyranny without blinking an eye.

The Coronavirus Hoax: Overhyped To Bring About More Tyranny

Coronavirus: What Does All of the Fear Drive You Towards? The Government’s Answers, Or The Lord’s Resolve?

Perhaps when there are all these things coming upon the united States and even the world, and are told to look to the state approved medical “experts,” should the people not look to their God?

And when they shall say unto you, Seek unto them that have familiar spirits, and unto wizards that peep, and that mutter: should not a people seek unto their God? for the living to the dead? -Isaiah 8:19

Finally, keep in mind that throughout history, there have been those who were deceived by their drugs, and I don’t think that means things in the Creation that God made, but rather outside things that are introduced into the body.

As the Book of Revelation, which was largely fulfilled in the first century destruction of Jerusalem just as God promised (Deuteronomy 28; Leviticus 26), tells us at that time:

That term sorceries is used in other places in Scripture as well, and is the Greek term φαρμακείᾳ (pharmakeia), and means, “Magic, sorcery, enchantment. From pharmakeus; medication.”

People are actually being led astray by trusting in vaccines and the like instead of obeying what the Creator has said and provided for our lives.

And it appears that it is an effort to rob the people of trillions of dollars while government grabs more power unchallenged.  It’s time that was stopped.

For more on that as it concerns vaccinations, my interview with Stephen Halbrook on the pagan origins, not Christian origins, can be heard below.

The Dark Idolatrous History Of Vaccines & Their Ties To Population Control

Michigan Tyranny: Family’s Farm Raided, Animals Killed – For Rehabilitating Them Without A Permit

Another Doctor Comes Forward: For All The Information That Is Out On This Fraudulent Plandemic, One Has To Ask Why No One Has Been Charged (Video)

Why Did Hundreds Of CEOs Resign Just Before The Pandemonium Began?

Coronavirus Exposed As The Hoax It Is! Can’t Be Spread Person To Person As The Problem Is The Immune System, Not A Virus