A new magazine cover of the Jacobin is striking a nerve after it appears that the magazine is saying the government is now god and our religion, to be worshipped. It sure begs the age-old question: who do you serve?

If we are ever to be free, we have to remove our consent. That goes for those who worshipped Trump as the messiah as well (and there were plenty.)  We should have never allowed ourselves to see each other as slaves to the ruling class, submitting to democracy (which is mob rule) and letting others have power over anyone else for any reason. Our inability to take the moral high ground has led to us this point in history. Government is now your god. Like it or not.

Describing Trump supporters as a cult has become a trope among his Democratic critics. Which seems ironic, considering how the very same crowd in the past four years tended to invest emotionally in whoever they hoped would end Trump’s presidency. Special Counsel Robert Muller probably received the lion’s share of the prayers, though figures like ex-FBI director James Comey or even Trump’s fixer-turned-critic Michael Cohen basked in some limelight. –RT

Here’s the cover of the magazine in its entirety for you to have a look at: 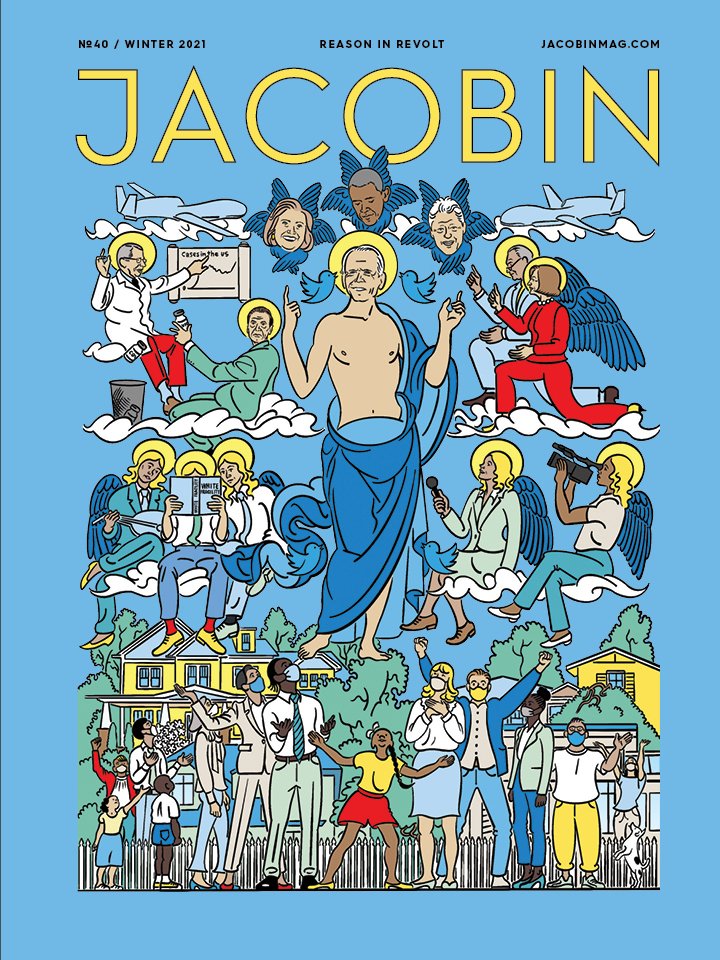 Biden’s larger-than-life, bare-chested figure is shown surrounded by ‘holy spirits’ of Twitter and ‘saints’. The latter include kneeling Democrat leaders in the US Congress, Dr. Anthony Fauci, fawning journalists, and manager-class devotees eagerly consuming the ‘holy scripture’ from what is probably the latest Barack Obama memoir. The former president himself is shown as a six-winged seraphim bracketed by the likewise angelic Hillary and Bill Clinton, with the trio gazing benignly from the heavens. A crowd of mask-wearing suburban laymen on Earth celebrates Biden’s ascension. A pair of Reaper drones complete the picture, providing a clear hint for the doubtful that the image should be taken with a grain of salt.-RT

It is way past time to figure out that this is the plan.  One world government, worshipped under the one world religion where the very few control and enslave the many.  Trump obviously didn’t do anything he promised, such as drain the swamp, and people are still worshipping him as some sort of messiah as well.  Stop allowing others to rule over you and making exceptions if one has a different letter behind his name.

Democracy is mob rule. If voting mattered, they wouldn’t let us do it. Government is slavery. Taxation is theft. Time to wake up and take the moral approach that no one should be a master and no one should be a slave regardless of whether it’s called “government” or not.

Hopefully, this is the wake-up call people need and the push toward a liberated humanity, truly free from their chains.

Is The Church In America Really Dying?

The Normalization of The Unthinkable Backfires: Police Defend Convicted Serial Pedophile Against ‘Hate’