Home»Politics»Diabolic Education: Are Parents Really Going To Sit By While THIS Is Being Taught In Public School?
Politics

Editor’s Note:  Be sure and catch Lynne and my interview on this subject on The Sons of Liberty Radio.

That stated, the information which follows is DEEPLY disturbing and is NOT suitable for young minds. However, as parents and Warriors protecting our children, we MUST find out what’s going on. This particular incident is going on in the State of Georgia, in Bryan County. That’s near the Coastal area of GA. 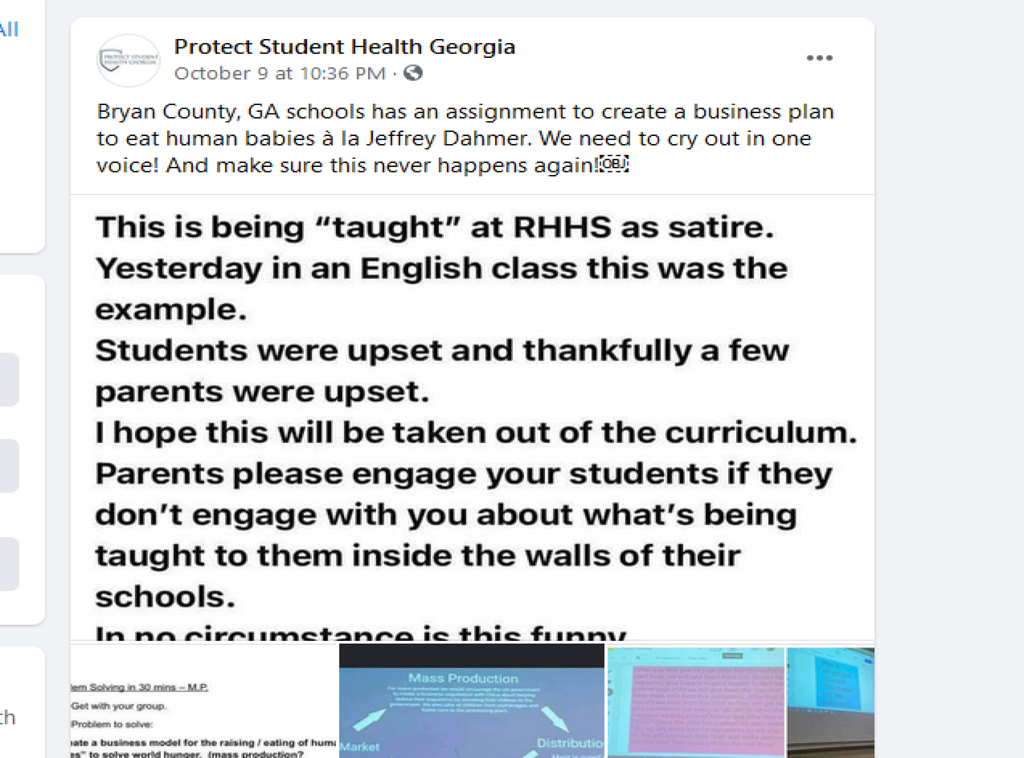 Yes, you read correctly, a business plan in the fashion of a serial killer, and to consume children. If that’s not scary enough, the individual pictures which the GA group featured are even more chilling! I’ll include those below. However, first, let’s look at a few other items.

Warriors, according to some of the taxpayer/parent comments made on this Facebook page, the satire assignment was to be in connection with the 1729 booklet by Dr. Jonathan Swift. The full title of the booklet was much longer and was indeed, sold as satire. Swift proposed that to solve Ireland’s economic problems, fatten up the poor children and feed them to the rich people. However, according to the Project Gutenburg link I provided above, if you read the entire work, you’ll see he actually had NO desire to carry out such a plan, but was trying to draw attention to a serious problem at the time, which, it seems, the government was ignoring. In no way did Dr. Swift or the Irish Government carry out cannibalism, ESPECIALLY in the style that Jeffery Dahmer did!

Warriors, also stated in the comments of the above image, was that Jeffery Dahmer has been featured in a comic book. According to Amazon books, there’s a newer graphic novel by a childhood friend of Dahmer’s trying to show the serial killer wasn’t always a bad person. However, you can also find a collector’s comic book featuring Dahmer. If you compare covers, the first one isn’t too scary, but the second one is. Warriors, it’s not new to see society try to profit off of tragedies; nor to see society try to, in some ways, try to justify away why someone could be so evil. IF you noticed in the Facebook image above, some students were upset, as well as parents. Rightly so! Creating a Dahmer business for eating children is NOT satire in any way!

The School involved is Richmond Hill High School. The assignment was for English. However, it’s not stated which high school grade or teacher involved. It’s unclear if this was an Advanced Placement assignment or a regular assignment.  Here’s a link to the entire English Department Staff’s page. It’s also unclear if, in fact, this twisted assignment was in another department aside from English.

Warriors, here’s an image of the assignment, in full. Notice the idea appears to be more ‘critical thinking problem solving’, than English related: 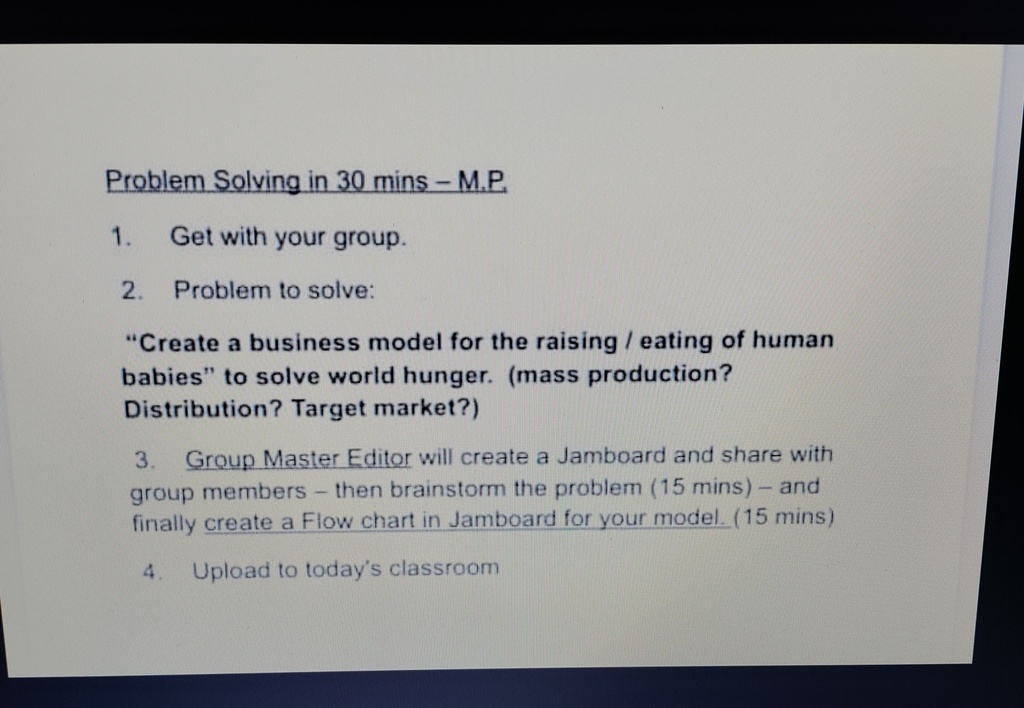 Here’s the image of the circular pattern of “Mass Production”, “Distribution”, and “Target Market”: 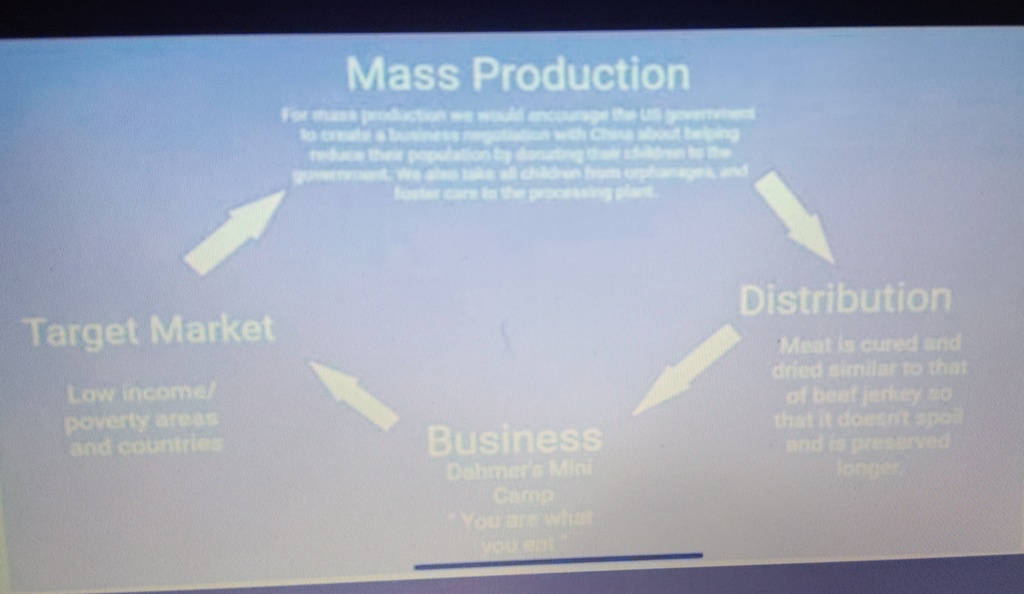 (*Note: the image is hard to read, so here’s the text for each section. Mass production: “For mass production we would encourage that the US government (to) create a business negotiation with China about (illegible) reduce their population by donation their children to the government. We plan to take all children from orphanages and foster care to the processing plant.”  Distribution states the the meat would be processed much like beef jerky so that it doesn’t spoil and can be preserved longer. The business of this student group has titled their model “Dahmer’s Mini Camp: You are what you eat”. Lastly, the Target Market is ‘low income/poverty areas and countries’.)

Lastly, from the disturbing images is this visible attitude of a high school student’s Plan B: 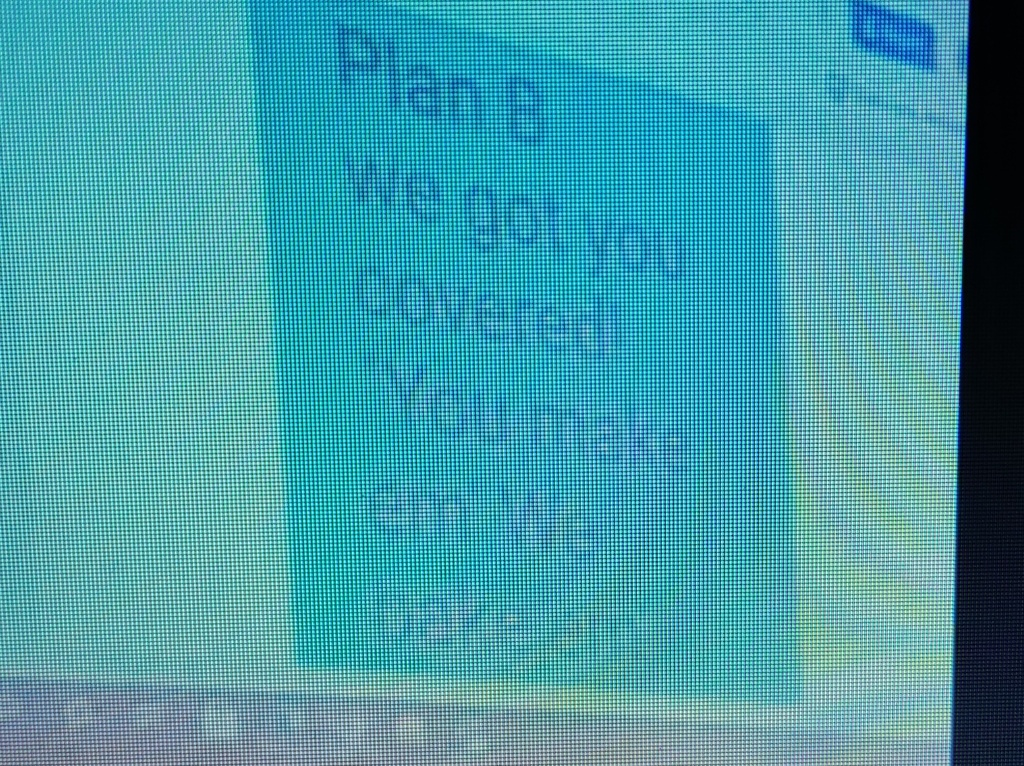 I’m sure if we asked this person, it would be passed off as “I wasn’t serious; I was joking!” Warriors, assignments like this are DANGEROUS! Not just because kids are learning life isn’t precious, but that a viable solution to world hunger is actually eating others.

However, I’m not really surprised.

Neither should you be. Why?

No idea, however worthy and respectable OR how absolutely horrible; It seems  nothing is off the table!

One of the images I couldn’t read or see entirely, from this particular Facebook page, did state something about the current vaccines as the ‘protectors’ which would lure the children in, and once, in; they were captives. From there, we can only image what those captured faced, in this ‘satirical’ assignment.

Parents/Warriors, have YOU seen a similar disturbing assignment in your area? Please: SPEAK UP! 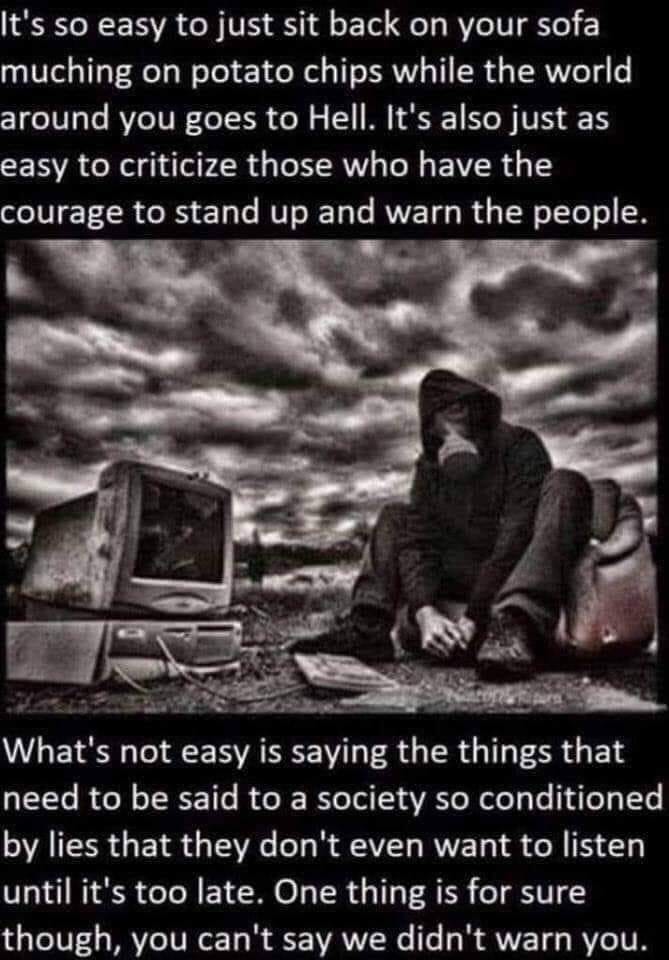 One Final Note Worth Mentioning:

Warriors, I did want to share with you that I looked into the Protect Student Health GA website. I noticed they are firmly against the CSE or Comprehensive Sexuality Standards. That’s a good thing. The group also appears to be connected with the Family Watch International, based in AZ.

Be sure to look at all the resources and you’ll find other groups Family Watch Int’l is involved with. Most troubling is that from their website, you can watch a short video where they’ve sold out to the SDGs (Sustainable Development Goals)!

Warriors, SDG #1 is NO POVERTY! If you apply the sick attitude of the GA high school’s assignment, you should have one of those ‘aha moments’.

Warriors, if you happen to live close enough to Bryan County, GA, these are the next School Board meeting dates, according to the Richmond Hill High School’s website:
10/21; 10/28; 11/18 and 12/16. Go, show up and speak up! Assignments like this are a danger to the health and well being of the students and their minds!

If you don’t live near this area, but have similar dangers:  go, show up and speak out!

US State Reps Vote To Compensate “Vaccine-Related” Injuries – When Will They Seek To Bring Justice For Those Killed?

The Supply Chain Crisis: Part of the Planned Reset?

Why Does Pfizer's Own Website State That One Of Its COVID Shots Is "Approved" While The One They Dispense Is Only "Authorized"?