Brennan and the U.S. intelligence community knew months prior to the 2016 election that the collusion smear was the result of a campaign operation hatched by the campaign of Democratic presidential candidate Hillary Clinton.

And not one person has been indicted.

Newly declassified handwritten notes from former CIA Director John Brennan show that the U.S. intelligence community knew in 2016 that Russian intelligence was actively monitoring, and potentially injecting disinformation into, Clinton’s anti-Trump collusion narrative. The intelligence concerning Russia’s knowledge of Clinton’s campaign plans was so concerning to Brennan and other national security officials that they personally informed Obama of the matter in the Oval Office in the summer of 2016. The handwritten notes from Brennan were declassified by Director of National Intelligence (DNI) John Ratcliffe and provided to Congress on Tuesday afternoon.

According to the declassified notes, Brennan and the U.S. intelligence community knew months prior to the 2016 election that the collusion smear was the result of a campaign operation hatched by the campaign of Democratic presidential candidate Hillary Clinton.

“We’re getting additional insight into Russian activites from [REDACTED],” Brennan’s handwritten notes state. “Cite alleged approval by Hillary Clinton–on 26 July–of a proposal from one of her foreign policy advisers to villify [sic] Donald Trump by stirring up a scandal claiming interference by the Russian security services.”

The notes appear to have been prepared by Brennan to memorialize a meeting held at the White House with the president and his top national security advisers. Included in Brennan’s notes are the responses of other participants in the briefing — including those of former White House National Security Adviser Susan Rice, former White House Chief of Staff Denis McDonough, and former DNI James Clapper, but those responses are redacted.

At one point, Obama asked whether there was any evidence of collaboration between the Trump campaign and Russia, but any response that may have been recorded in Brennan’s notes is redacted. 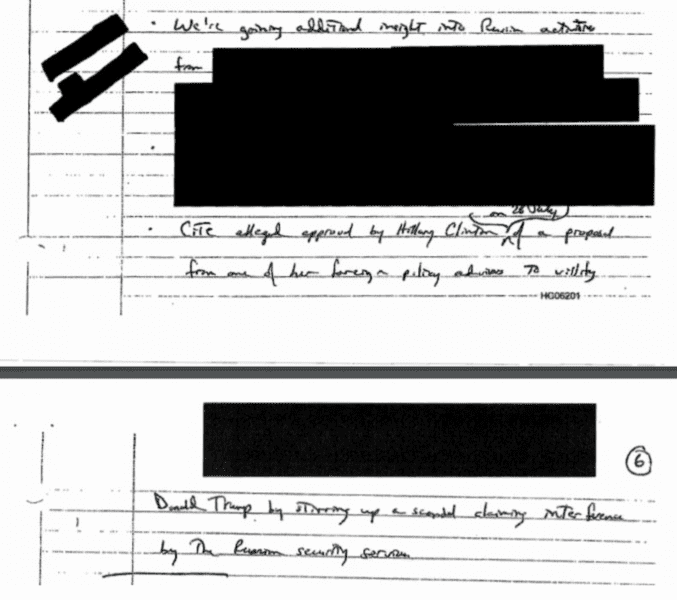 Moreover, the CIA and other intelligence agencies also suspected early on that many of the key claims underpinning the collusion narrative could themselves be the product of deliberate Russian disinformation. Last week, Ratcliffe released a declassified memo, based in part on Brennan’s notes, noting that Russian intelligence was aware of the Clinton campaign’s plan, increasing the likelihood that it would be tainted by Russian disinformation.

While the Clinton campaign hired Christopher Steele, a foreign agent in the pocket of a sanctioned Russian oligarch, to concoct a dossier of allegations against Trump, the primary source of the most salacious and damning allegations of treasonous collusion came from a suspected Russian spy named Igor Danchenko. Last month, Attorney General William Barr informed Congress that the Federal Bureau of Investigation (FBI) was so concerned about Danchenko, who had been dubbed the “Primary Sub-Source” used by Clinton campaign sub-contractor Christopher Steele in his thoroughly debunked Steele dossier, that it had previously deemed him a national security threat and investigated him to determine if he was a Russian spy. The bureau called off the investigation once Danchenko left the United States and was no longer within the purview of the FBI’s domestic counterintelligence mission.

Although Democratic lawmakers have claimed, without evidence, that the latest declassifications are themselves the product of Russian disinformation, multiple senior intelligence officials told The Federalist that the CIA remains convinced that Russian intelligence sincerely believed as early as summer of 2016 that the Clinton campaign launched its anti-Trump collusion smear operation to distract from Clinton’s e-mail scandal. In October of 2017, the top lawyer for the Clinton campaign and the Democratic National Committee finally confessed publicly that he had personally hired the Democrat opposition research firm Fusion GPS, which paid Steele to peddle allegations that Trump was a secret Russian agent working on behalf of Vladimir Putin.

Ratcliffe also declassified on Tuesday portions of a formal CIA investigative referral sent on Sept. 7, 2016, to fired former FBI Director James Comey and fired former counterintelligence official Peter Strzok asking them to investigate the Clinton campaign’s anti-Trump collusion smear operation in light of Russia’s knowledge of the plan and the likelihood it could be tainted by deliberate Russian disinformation. Rather than act on the CIA investigative referral in the same manner they had launched a full-blown counterintelligence investigation of the Trump campaign, Strzok and Comey refused to initiate an investigation.

“Per FBI verbal request, CIA provides the below examples of information the CROSSFIRE HURRICANE fusion cell has gleaned to date,” the memo states. “An exchange [REDACTED] discussing US presidential candidate Hillary Clinton’s approval of a plan concerning US presidential candidate Donald Trump and Russian hackers hampering US elections as a means of distracting the public from her use of private e-mail server.”

The cover note of the memorandum stated that the information within was provided to the FBI “for the exclusive use of your Bureau for background, investigative action, or lead purposes, as appropriate.”

There is no evidence the FBI ever took any action to ensure that Russian knowledge of Clinton’s plans did not lead to infiltration of that campaign’s operation by Russian intelligence agents. The CIA referral, specifically its reference to a “CROSSFIRE HURRICANE fusion cell,” suggests that the Obama administration’s anti-Trump investigation may not have been limited to the FBI, but may have included the use of CIA assets and surveillance capabilities, raising troubling questions about whether the nation’s top spy service was weaponized against a U.S. political campaign.

Formal CIA Referral To FBI … by The Federalist

What If It's Your Mom Or Dad? When The Elderly & Frail Die After Receiving COVID Vaccine