On February 2, 2021, Representative Alexandria Ocasio-Cortez (D-NY) produced what initially appeared to be a LIVE, harrowing recounting of the events of the January 6, 2021 DC riot, on her Instagram account (see here).

This video was of her rather casually dressed, alone in a room/closet with an unadorned beige wall behind her. At the start of the video, she is smiling, and her body language appears to display a relaxed and comfortable demeanor. During the 90-minute video, Representative Ocasio-Cortez described her “terror” at being in her office that day. During her recital, she stood from her chair and mimed actions she claimed to have taken during this event, like hiding behind an open door and peering through the crack where the hinges are. As she is naturally an animated speaker, it was not a surprise to see her trying to show “fear” when discussing certain aspects of the event.

It is critical to note that, her body language did not come across as that of someone who had been in a “life threatening event”. In fact, her non-verbal language (an extremely well-studied and documented venue of research), was completely contradictory to her spoken word (all 90 minutes of it). (You can learn more about non-verbal communication here: https://fremont.edu/how-to-read-body-language-revealing-the-secrets-behind-common-nonverbal-cues/ )

Having been to D.C. hundreds of times over the last decade, and in numerous Congressional offices inside of CHOB, I am very familiar with where her office is located. As I watched her video, I was struck by several things that did not ring true with what I know to be facts, and I decided to take the pieces of her story apart. I truly wanted to see if I had somehow mis-remembered the relationship between the locations of her office and the Capitol Building.

The first thing I did was pull up a Google Map and put in the Capitol Building and her office address. What you see is that, while there is a “path” she could use to cut the distance, her office is over one-quarter (1/4) of a mile from the Capitol Building. The Capitol is situated on a steep hill and not all doors, are accessible, at all times. One can assume that due to the increased security in D.C. that day, the ancillary entrances would be closed, to control the traffic in and out of the building. This means if she were to have to GO to the Capitol, she would have to walk to the main entrance or utilize the “Tunnel”, which is actually a longer walk. (More about the “Tunnels” later.)

(Path from Capitol Building to Cannon) 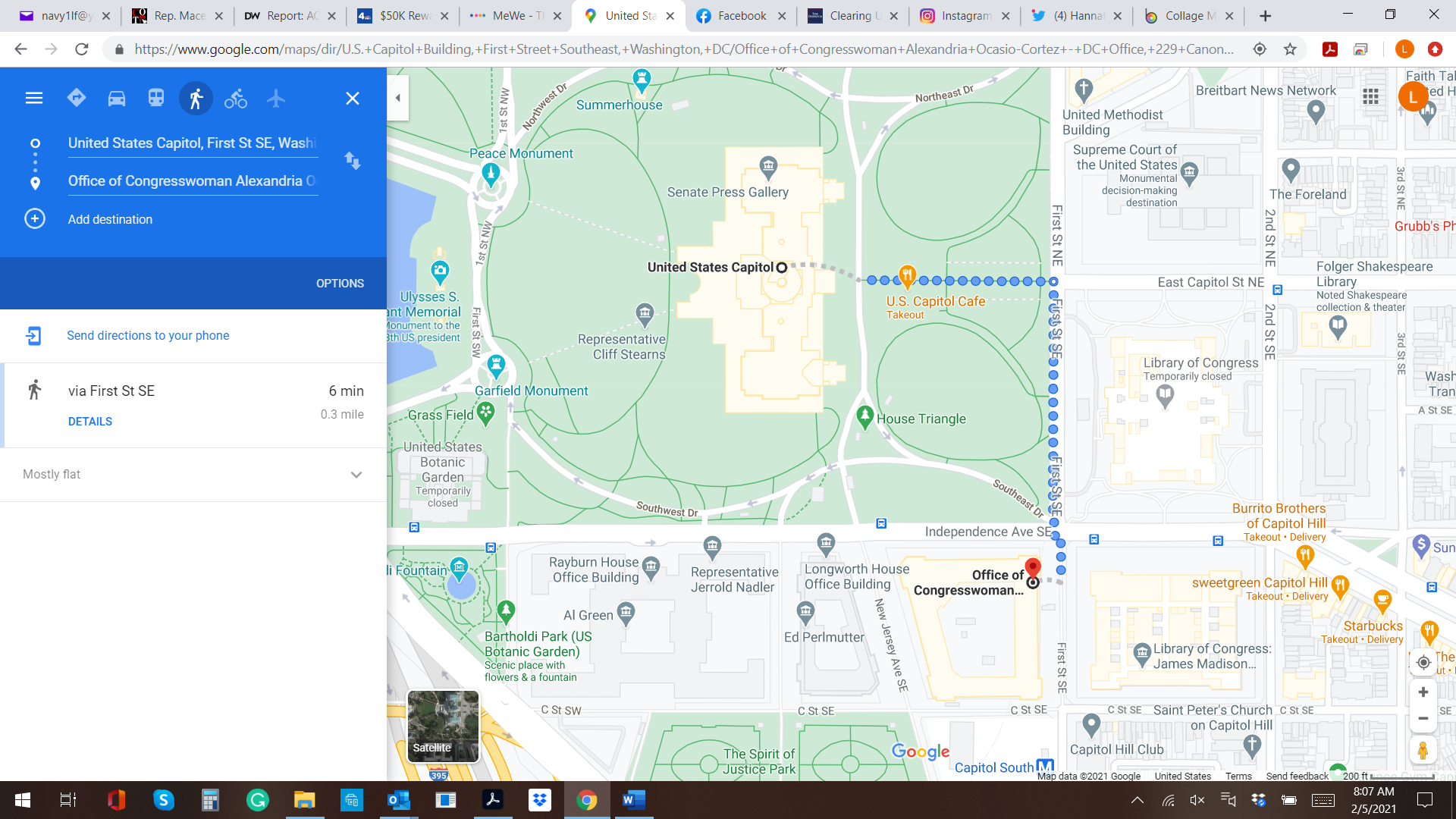 According to numerous reports, the rioters remained predominantly on the Capitol grounds proper. (See the map above). These same reports are clear that Cannon House Office Building was not breached. The Capitol police were going to offices to escort Members and their staff to the Tunnels, again, which had been secured and were the safest place for all to be. (You can read more about the Tunnels here: https://www.washingtontunnels.com/ ). I will share that a professional Congressional staffer my organization works with, called that day and asked if we were in the District, she would have a pass set aside to get us into the Tunnel because they had been secured and were being utilized to keep people from having to go outside into the melee.

Moving on to Representative Ocasio-Cortez’s characterization of the Capitol Police Officer’s appearance and lack of a partner or escort. It is important to mention that she DID repeatedly state during her monologue, that she assumed the man yelling in her outer office was a “domestic terrorist” and was there to “kill her”. After the story was published and she began receiving backlash for her obvious “poetic license”, did she recant that statement.

One of the two key statements she made were,

One side note – I am having a great deal of difficulty understanding AOC’s statement that she and her Legislative Director were not “… sure if the officer was there to help us or hurt us.” From all accounts about her life, it appears that she has led a reasonably peaceful one. One that would not account for such an irrational fear. After doing some significant digging, I find no mention of any incident in which AOC was negatively impacted by a police officer. NONE. I will say that if someone can provide a factual account of such an incident, I will gladly acknowledge it.

Now to address her claims of “bombs at her building”. This is a patently false statement, made simply to escalate the “threat level” she claims to have been under. Within two (2) days of the riot, two (2) pipe bombs were found. One at the Republican National Committee headquarters and the other at the Democratic National Committee headquarters. NONE were found anywhere near Cannon or the Capitol Buildings. https://www.nbcwashington.com/news/national-international/50k-reward-in-search-for-person-seen-placing-pipe-bombs-outside-rnc-dnc-hqs/2534453/

The last topic to address is Representative Ocasio-Cortez’s back-peddling and intentional outreach to squash any dissent or disagreement with her fabricated dissertation of the events that day. It became immediately clear that many clear-thinking adults saw through her shoddily created “nightmare” and refused to sit by and allow it to fester. Even her fellow Member of Congress, Representative Nancy Mace took to social media to refute Ocasio-Cortez’s claim of rioters in the Cannon HOB. Millions were so disgusted by AOC’s obvious and disgusting bid not just for attention, but to further demonize Police and conservatives, that many launched into a social media campaign to “out” her fabrication. The hashtags, #AlexandriaOcasioSmollett and #AOClied began quickly trending. The immediate requisite “meme’s” appeared, (“a reminder of a hate hoax perpetrated by actor Jussie Smollett, wherein he claimed to have been attacked by Trump supporting racists. It was later revealed that he had paid two men to stage a fake attack.”)

As the day wore on, AOC realized that her “distress” was not going to be taken at face value or garner any sympathy, rather, the public was not going to accept yet another complete fabrication of events, skewed to demonize specific sectors of our population. She did what any immature, child would do in the situation. She reached out to her “followers” via a mass email, asking them to REPORT the uses of the hashtags and asking the Big Tech companies to defend her by squashing the rising vocalization of contempt for her. In other words, she asked them to treat all posts, tags and uses of the hashtags as FAKE NEWS. As expected, they jumped at the chance and began a campaign of targeting those posts that refuted her “story”. https://factcheck.thedispatch.com/p/clearing-up-what-happened-to-ocasio?fbclid=IwAR2Fc37PnbbrQuY6ldk2_0PoUDtEGV4JdOHaW1IugRANTG2ugv-UScrQ1DM

The link above is one that was attached to a post I made, sharing her Instagram video, and stating that I unequivocally did not believe a syllable she had uttered. Facebook literally waited less than a day to mark my post as “Missing Context” and asserted that it had been “Fact Checked”. Out of pure curiosity, I went to the linked article by the “Fact Checker”. If you click that link, be ready to watch three (3) separate clips from AOC’s Instagram video, complete with her fawning public’s commentary about “how brave” she was.

The accompanying text of the article, by “Journalist” Alec Dent, who I offer congratulations on obtaining his first “post-academic” journalism position at The Dispatch, is a disjointed account of AOC’s monologue and her follow-on attempts to both defend her statements but also to “clarify” them. You see, her LIVE video was, while not articulate, widely viewed. Mr. Dent begins his article by stating that, “Cortez’s description of her evacuation led some to believe that rioters broke into her office while she was in there…”. (Emphasis added). I wonder if Mr. Dent’s article was reviewed by an editor before it is published! Had I been the one to review it, I would have pointed out to him that his statement (above) reinforces the facts that we all know…that she MADE these statements. She is trying to spin this onto the public and goes so far as to say that we “don’t understand the Capitol Complex layout”.

Mr. Dent’s attempt to “fact check” her article on behalf of Facebook, solely served to prove that,

1) AOC lied profusely and with great color, to both garner sympathy and further divide our nation, and

2) If you want to “fact check” what the PUBLIC is interpreting from AOC’s monologue, you should first “Fact Check” HER statement, or be prepared to wipe a lot of egg off your face and lastly,

3) that if you plan to “Fact Check” a story, you should do with the FACTS that existed PRIOR to the story, NOT create a new story, sloppily constructed to attempt to support the one you are “Fact Checking”.

To be clear, WRITING a story 2 days AFTER an article and then using IT as your basis of FACT, is NOT how you “Fact Check”. EVER. But then, it is clear that this is why Facebook chose Mr. Dent to write the article. He didn’t “Fact Check” anything she said. He compiled pieces and parts of what the aftermath has been in order to support Facebook’s malicious “Fact Checking” against conservatives and AOC’s relentless desire to be in the limelight.

All statements and opinions contained in this article are my own.

article posted with permission from Sons of Liberty Media. Article by Lauren Price.

99 Relatable Things That Only Preppers Will Understand

The Bureaucracy’s Democrat Majority Made America a One-Party Government

Kate Shemirani: The Battle For Archie Battersbee & What Does It Mean To Be Alive? (Video)

Vermont: Records "Disappeared" Of Cop's Arrest Over Torturing Woman To Silence Her Claims Of Child Rape