It’s truly incredible what men will do to go around tyrannical bureaucrats and agents of the state infringing on our rights. In the long line of what has become a popular notion among liberty-loving patriots, that being 3-D printing which in many instances stops registration and tracking cold in its tracks, there appears to be a fully-functional, 3-D printed RPG-like launcher that has been produced.

Zero Hedge has the story. Check this out!

In just a decade, 3D-printed guns have come a long way from the single-shot “The Liberator” pistol published online for the world to download in 2013 by Cody Wilson’s Defense Distributed to a fully functional 3D-printable semiautomatic pistol carbine entirely printed at home to what now appears to be a rocket launcher-like device.

Journalist Jake Hanrahan reports Deterrence Dispensed, an online group that promotes and distributes open-source 3D-printed firearm blueprints, has developed what appears to be a recoilless launcher. 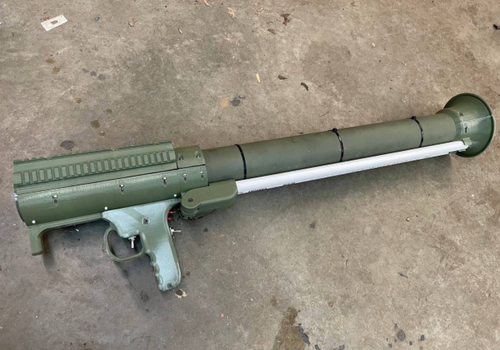 Hanrahan said it’s a “66mm recoilless launcher with shoulder rest attachments, allowing it to convert to a mortar on the go.”

This is a 66mm recoilless launcher with shoulder rest attachments, allowing it to convert to a mortar on the go. pic.twitter.com/esdUxNJD7g

This is a 66mm recoilless launcher with shoulder rest attachments, allowing it to convert to a mortar on the go. pic.twitter.com/esdUxNJD7g

Hanrahan shows another video as the recoilless launcher is propped up on what appears to be a bipod serving as a mortar.

Deterrence Dispenses have dubbed it “The CANzerfaust”, claiming it’s only purpose is for launching drinks cans… pic.twitter.com/9Z8GMAM433

YouTubers have taken 3D-printed firearms to the shooting ranges to test their durability. Surprisingly, these unserialized weapons worked pretty well.

One of the creators of Deterrence Dispensed, known as JStark, mysterious died of a heart attack after police raided his home in Germany last fall.

The Biden administration and the ATF are panicking about “ghost guns,” or in their eyes, 80% lower receivers. They’re likely to announce regulation on 80% lowers in the coming weeks, if not months. As for 3D-printing weapons at home, that’s going to be a challenge for the ATF to regulate.

Since before he was elected, president Joe Biden has promised more gun control, and he is doing everything in his power to keep this one promise — up to and including executive action — specifically targeting 3D printing of guns. Or, as Biden refers to them, Ghost Guns.

The term “ghost gun” is meant to incite fear and is used by the anti-gun crowd as a slogan to sway the ignorant away from the fact that law-abiding citizens often customize their legal weapons with parts obtained online or manufactured in their homes. Some of the parts are drilled with machine tools or 3D printed and therefore do not have a serial number so it is harder for government to track the weapons. Biden will make this legal activity for law-abiding gun owners — illegal.

However, as the Fast and Furious scandal — which happened under Biden’s tenure as VP — shows us, serial numbers on guns don’t stop anyone from committing crimes. The US gave serialized weapons to cartels, who in turn used them on Americans.

For generations, advocates of private gun ownership have been fighting exhaustively through political channels to protect their right to keep and bear arms. Gun owners even have one of the strongest lobby groups in Washington, the highly disappointing NRA. Yet over the years, gun rights continue to diminish in America, despite the constant political campaigns by the NRA and politicians who claim to support gun rights.

However, in the past few years, one guy with a good idea has managed to do more to protect gun rights than the NRA has in decades of political involvement. Cody Wilson is the founder of “Defense Distributed” and the “Wikiweapon” project, which allows anyone with a 3D printer to create their own untraceable gun in the privacy of their own home.

While alarmists claim that 3D printed guns will be the end of humanity, the fact is that these plans have been online on torrent and dark web sites for years and we’ve yet to see an onslaught of violence with them.

What’s more, as the gruesome murder-suicide on a college campus in Walnut Creek, California illustrated is that people don’t even need these plans or 3D printers if they want to make their own untraceable gun. Scott Bertics built the gun he used to shoot himself and Clare Orton without anyone knowing and entirely through legal measures.

Wilson makes no secret that the intention behind distributing CAD files to create homemade guns is to make gun control measures obsolete and bolster the Second Amendment, which is under continual assault from anti-gun activists.

Naturally, this has put a target on his back. This week, Forbes published an interview with Wilson, in which they referred to him as the “World’s Most Dangerous Crypto Anarchist.”

Forbes paints Wilson as some evil shadowy figure who pines away in the darkness waiting to unleash terror on the world. But in reality, Wilson is an entrepreneur who has helped make self-defense, open source.

Forbes cites statistics from the Bureau of Alcohol Tobacco Firearms and Explosives, which claims that from 2016 through 2020, some 23,906 suspected ghost guns were recovered from crime scenes, including 325 homicides or attempted homicides.

But, as mentioned above, these weapons are likely not 3D printed and instead are ordered as parts from various places on the internet or had their serial numbers rubbed off. Nothing is inherently immoral about building these guns either, but the feds, and Forbes, attempting to use “ghost guns” to fear monger, completely ignores the intent behind them.

In Chicago, in 2021 alone, there were 783 murders and an additional 3,592 shootings, none of which were carried out with 3D printed or constructed weapons. During the same time period, millions of people downloaded 3D blue prints for guns and Wilson generated nearly $5 million from his company Defense Distributed.

The 3D gun business is booming and it’s not leading to massive terror attacks.

Wilson’s company sells subscriptions to his Legio site where members pay between $5 and $8 per month, giving them access to 16,000 files for making firearm and gun components. He also sells 3D printers specifically designed to circumvent the state-sponsored gun control. Coupled with his new software, dubbed the “Zero Percenter” — because it can turn a completely untouched piece of aluminum into a firearm — Defense Distributed products are a means of leveling the playing field.

“They are literally trying to control the world. But as the Zero Percenter demonstrates, blocks of metal are also guns,” Wilson told Forbes.

In short, Wilson’s small business is thriving and largely in part thanks to the federal government’s crack down on gun rights. Despite fear mongering from the mainstream media and the like, 3D printed guns are a boon to liberty and will only serve to foster freedom around the world.

This is because guns — in the hands of good people — level the playing field against guns in the hands of bad people. It is this simple. Just imagine the power a 3D printed gun would give a mother in an African village as warlords come through hacking off the limbs of children with machetes. With enough of the villagers having these guns, they could effectively defend themselves against large groups of tyrants even if they had automatic weapons.

Sadly, mainstream media, as illustrated in this Forbes piece, as well as statists, only see the potentially negative aspects of these 3D-printed guns.

This protectionist attitude is self-serving and one-sided and ignores the benefits of an armed society as well as history. And, it only serves to further the oppression of those who cannot defend themselves.

While it would certainly be an amazing thought to be able to live in a world without guns, that is simply not the case. Until it is the case, anyone who wants to defend themselves and their family, should be able to do so in any manner they see fit — including making their own 3D gun — as the only other option is tyranny.

What Is The Love Of God? (Video)

Expert In Growing Food & Surviving Under Communism: Time To Get Your Garden In Order - The Fragile Food Supply & Food for Life (Video)