Home»Commentary»God Will Give His Glory to None Else: The Headless & Armless Nike “Goddess of Victory” at Yorktown’s Museum’s Entrance
Commentary/Videos

God Will Give His Glory to None Else: The Headless & Armless Nike “Goddess of Victory” at Yorktown’s Museum’s Entrance

“I am the LORD; that is My name. And My glory will I not give to another, neither My praise to graven images.” -Isaiah 42:8

Yorktown, Virginia is the land in which George Washington, the American troops, the black robed regiment, the minutemen (miltia), along with the French troops crushed the backs of the strongest military might in the world the British.

We all know that our forefathers made an appeal to Heaven, which was an appeal to the Supreme Judge of the World, by placing a “firm reliance on the protection of Divine providence” so that as a result, we we would know who is responsible for giving the victory (Deuteronomy 22:28).

“For the kingdom is the LORD’S: and he is the governor among the nations.”

With this in mind, I have to ask why then does the Yorktown Museum in Yorktown, Virginia have a headless and armless Nike, goddess of victory, when making entrance?

When I asked the question why she was headless and armless, they had told me that is how she was dug up and instantly, I was quickened to Scripture.

Because Eli did not deal with them, they were all three judged. They were all killed when Israel was defeated by the Philistines at the Battle of Aphek (1 Samuel 4:17–18).

In 1 Samuel 5:2, the victorious Philistines made the mistake of taking the ark of the covenant and brought into the house of their gods.

In verse 4, Scripture tells us:

“And when they arose early on the morrow morning, behold, Dagon was fallen upon his face to the ground before the ark of the LORD; and the head of Dagon and both the palms of his hands were cut off upon the threshold; only the stump of Dagon was left to him.”

Well, friends, when you look to that of Nike, the goddess of victory, what is it that you see still remaining? A stump with two wings. Nothing more and nothing less. 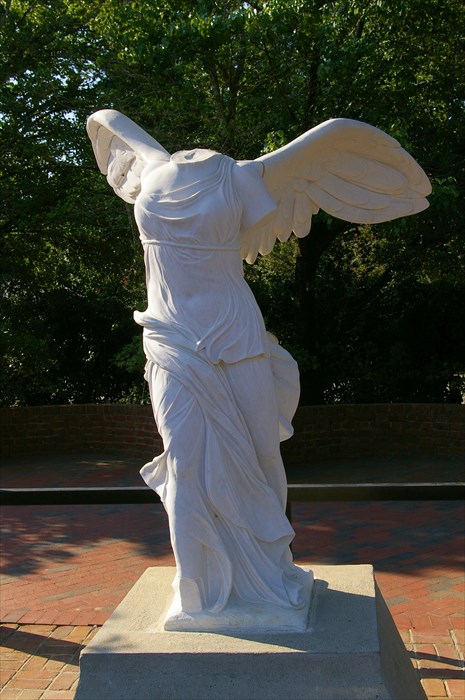 To suggest that Nike, goddess of victory, is somehow the one responsible for giving us the victory in establishing what it is that we have today is nothing short of profane blasphemy. The appeal was to Heaven, the flags that were flying were “No King But Jesus.”

In conclusion: Isaiah 42:8 tells us, “I am the LORD; that is My name. And My glory will I not give to another, neither My praise to graven images.”

Who Is Killing The Crypto Millionaires?

God Will Give His Glory to None Else: The Headless & Armless Nike “Goddess of Victory” at Yorktown’s Museum’s Entrance