If you believe a “medical professional” would jeopardize their medical license to participate in an illegal activity such as shooting up heroin under the guise of “harm reduction”, you are as gullible as Governor McKee.

Governor Dan McKee signed the legislation sponsored by RI State Senator Joshua Miller who was quoted as saying “Having a place where someone can save them from an overdose and where there are people offering them the resources they need for treatment is a much better alternative to people dying alone in their homes or their cars,”

Rhode Island State Representative John G. Edwards (Portsmouth) says the centers reduce the chance of overdose and serve as a gateway to treatment and rehab. Under the new law, the facilities would require the approval of the local city or town council to operate.

Here is a link to an article I wrote last year regarding New York State Senator Gustav Rivera’s attempts to destroy neighborhoods, businesses and schools in the boroughs he represents with endorsing “safe injection sites.”  Safe Injection Sites in your Neighborhood- Are You Ready? – Salem-News.Com

Fortunately in the world of common sense, the Rhode Island law that McKee signed stipulates city or town leaders must vote to allow a center to open.  Hopefully residents of cities and towns in Rhode Island will show their outrage to local leaders and in doing so end the political careers of those politicians supporting illegal drug use under the guise of “solving a drug epidemic.”

State Senator Melissa Murray, who endorses this lunacy, referred to me as a “troll” when I exposed elected officials of Rhode Island for their support of “safe injection sites” enabling drug addicts to illegally shoot up drugs. I apologize that I called her a “fool.” I will leave that name up to the voters of Rhode Island who have voted these dangerous politicians into office to represent them in keeping their neighborhoods, schools and businesses safe from criminal activities.

The video below is from Canada and disputes the attributes of “safe injection sites”.  It should be reviewed by every parent, store/business owner, and school official if they want to keep their neighborhoods and children safe from what has happened in Canada. 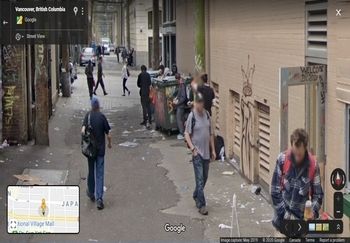 Here are facts for you Governor McKee. There is a 100% to 400% increase in drug related deaths around the safe injection sites in Canada and here is your proof. LINK: Supervised consumption review report release – March 5, 2020.  It has nothing to do with harm reduction.  It has everything to do with “harm promotion.”

Hopefully the voters in Rhode Island will not let Dan McKee, Joshua Miller, John Edwards, James McDonald and Melissa Murray destroy their beautiful state and the lives and livelihoods of their families.  A picture is worth a thousand words.  These pictures shown in this article speak volumes for what their irresponsible actions will do.

Marianne Perez, Salem-News.com Investigative Reporter, is an Activist for Victims of OxyContin and Purdue Pharma throughout the United States and Canada. In July 2007, she testified against Purdue Pharma in Federal Court in Virginia at the sentencing of their three CEO's - Michael Friedman, Howard Udell and Paul Goldenheim - who pleaded guilty to charges of marketing OxyContin as less likely to be addictive or abused to physicians and patients. She also testified against Purdue Pharma at a Judiciary Hearing of the U.S. Senate in July 2007. Marianne works with government agencies and private attorneys in having a voice for her daughter Jill, who died in 2002 after being prescribed OxyContin, as well as the voice for scores of victims of OxyContin. She is currently working on a book that exposes Purdue Pharma for their continued criminal marketing of OxyContin. Marianne is a nurse, graduated in 1991 as president of her class, and also has a Paralegal certification. Marianne served on a Community Service Board for the Courier News, a Gannet newspaper in NJ, writing articles predominantly regarding AIDS patients and their emotional issues. She was awarded a Community Service Award in 1993 by the Hunterdon County, NJ HIV/AIDS Task Force in recognition of and appreciation for the donated time, energy and love in facilitating a Support Group for persons with HIV/AIDS.
View all posts

CDC's Guidances For Children In The Scamdemic Is Utterly Criminal (Video)