Home»Economy»Hard Evidence: “We Are In A Full Blown Global Depression”
Economy

Hard Evidence: “We Are In A Full Blown Global Depression”

For the last several months there have been warnings of a coming economic storm, with many forecasting serious financial calamity by the Fall of this year.

With stock markets in China having self destructed, Greece and Europe in another crisis, and corporate earnings for some of the world’s biggest corporations showing lackluster performance, it should be clear that the situation is rapidly deteriorating.

But for the last several years America has appeared to remain fairly insulated from overt crisis. We were told that a recovery had taken hold, jobs were returning and consumer confidence had reached new highs, propaganda which drove millions of investors back into stock markets and real estate. No one in the mainstream world, it seems, believes there’s anything to be concerned about.

A report from Zero Hedge highlights just how hard Americans have been hit with increased energy prices, inflation and low-wage labor offerings. This is the hard evidence that proves once and for all what most Americans will become privy to after the fact: we are in a recession.

One of the biggest drivers of the so-called recovery (in addition to the Fed’s $4.5 trillion balance sheet levitating te S&P500 and the offshore bank accounts of 1% of the US population) has been the US consumer: that tireless spending horse who through thick, thin, recession and depression is expected to take his entire paycheck, and then some tacking on a few extra dollars of debt, and spend it on worthless trinkets.

Sure enough, for the past 8 years, said consumer has done just that and with the help of the endless hopium and Kool-Aid dispensed by the administration (who can forget Tim Geithner’s August 2010 op-ed “Welcome to the Recovery“), and by the political and financial propaganda media, spent, spent and then spent some more hoping that “this time it will be different.”

The biggest culprit in the collapse in spending intentions was the middle class (those making between $50 and $100K) but mostly the wealthy, those with incomes over $100K. It was the latter whose spending expectations dropped to, you guessed it, the lowest in series history. 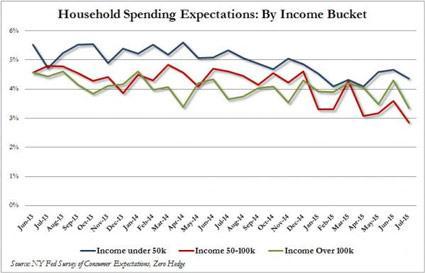 Needless to say, this was not supposed to happen.

Worse, in an economy where 70% of the GDP is in the hands of consumer spending, a collapse in spending intentions to multi-year low levels means just one thing: recession.

The U.S. economy is driven by one thing: consumer spending, much of it based on credit.

As the chart above shows, spending has collapsed. And that can really only mean one thing going forward. America is not about to enter a recession, we are already in one right here and now.

But that’s just part of the story. It actually gets worse.

We are, by the following account detailing Caterpillar’s global sales, in a full blown global depression:

Summarizing it all, after an increasingly shallower series of dead CAT bounces in the past year, first thanks to Latin America, and then the US, global retail sales just dropped by 14% – marching the biggest Y/Y decline since the financial crisis.

And the cherry on top: there has now been an unprecedented 31 consecutive months of CAT retail sales declines. This compares to “only” 19 during the near systemic collapse in 2008.

In other words, if global demand for heavy industrial machinery, as opposed to unemployed millennials’ demands for $0.99 Apple apps, is any indication of the true underlying economy, forget recession: the world is now in a second great depression which is getting worse by the month.

That’s right, while the band plays on and everyone says there’s nothing to worry about, the ship is rapidly sinking.

What follows is anybody’s guess, but if government military exercises and simulations are a guide, we can fully expect a significant economic event followed by widespread civil unrest. You didn’t think they were stockpiling guns, bullets, gas masks and riot gear just for fun, did you? Somebody in government knows exactly what is coming, and they will do whatever it takes to maintain control once the Ponzi scheme has been revealed to the rest of the public in the form of financial crashes and wealth confiscation.

It has been suggested that the collapse of the debt bubble could lead to shortages of the most basic necessities for survival. Analyst Greg Mannarino recently warned that because the growth, including population growth, we’ve seen over the last two decades has been dependent on credit, once that credit is frozen it will have ramifications that most people can’t even imagine as a possibility:

So, when the debt bubble bursts we’re going to get a correction in population. It’s a mathematical certainty.

Millions upon millions of people are going to die on a world-wide scale when the debt bubble bursts. And I’m saying when not if…

The scenario outlined by Mannarino is certainly an outlier, but what if he’s right?

TRENDING:  Credit Card Debt In The United States Is Approaching A Trillion Dollars

How would most Americans cope?

According to
The Prepper’s Blueprint

author Tess Pennington, they won’t because they have become so dependent on the system they simply will not have the tools or mental ability to adjust:

Collectively speaking, the contribution from our easy lifestyle and comfort level has created rampant complacency and a population of dependent, self-entitled mediocres. We no longer count on our sound judgement, capabilities and resources. The system keeps everything in working order so we don’t have to depend on ourselves, and furthermore, don’t want to. I realize that many of the readers here do not fall into this collectivism, as you see through the ideological facade and know that the system is fragile and can crumble.

Breaking away from the system is the only way to avoid the destruction of when it comes crumbling down. When you don’t feed into the manipulation tactics of the system, or enslave yourself to debt, and possess the necessary skills to sustain yourself and your family when large-scale or personal emergencies arise, you will be far better off than those who were dependent on the system. Those who lived during the Great Depression grew up in a time when self-reliance was bred into them and were able to deal with the blow of an economic depression much easier.

Which side of this would you want to be on?

Source: Going Rogue: 15 Ways to Detach From the System

For those who have failed to prepare the consequences will be horrific.

Economic Recovery? 13 Of The Biggest Retailers In America Are Closing Down Stores

The Rise Of The Temp Economy: More U.S. Employers Than Ever Want A ‘Disposable Workforce’

58 Facts About The U.S. Economy From 2015 That Are Almost Too Crazy To Believe

Hard Evidence: “We Are In A Full Blown Global Depression”