Justin Trudeau’s jihad. The jihadi was “disappointed” she’d failed to hurt anyone during the attack, no thanks to Canadian law enforcement. More than a year before she embarked on her jihad in one of Canada’s largest department stores armed with an archer’s bow and butcher’s knife, Rehab Dughmosh’s brother tipped off police that she was on an international flight to join ISIS.

HER BROTHER TOLD POLICE SHE WANTED TO JOIN ISIS. THEY DROPPED THE CASE. THEN SHE ATTACKED A CANADIAN TIRE STORE

More than a year before she entered a Canadian Tire store armed with an archer’s bow and butcher’s knife, Rehab Dughmosh’s brother tipped off police that she was on an international flight to join ISIS.

The RCMP notified Turkish authorities, who refused her entry into the country and put her on the next flight back to Toronto.

Dughmosh denied it. No charges were laid and the RCMP closed their file.

These are among the details that Dughmosh admitted in a Toronto courtroom Wednesday, a year and seven months after she allegedly threatened store employees and a customer with a golf club and a knife inside a Canadian Tire in Scarborough.

Dughmosh refused to enter a plea on Wednesday, but she presented no evidence to defend herself in her appearance at the Superior Court of Justice in Toronto. Justice Maureen Forestell entered a not-guilty plea on Dughmosh’s behalf.

An agreed statement of facts entered in court lays out what happened on the afternoon of June 3, 2017. Dughmosh packed three bags with an assortment of homemade weapons and headed down to the lobby of her Scarborough apartment.

Then she ran into her husband.

Anas Hanafy, separated from but still living with Dughmosh, asked the now 34-year-old what was in the bags. When he saw what was inside, he confiscated them from her.

What he didn’t know was that Dughmosh had concealed an archer’s bow and butcher’s knife beneath her robe.

At about 4:40 p.m. Dughmosh left her Scarborough home and walked to a nearby Canadian Tire store. Inside, she told an employee she wanted to purchase a set of arrows locked in a display case. The employee couldn’t hand her the items, citing a store policy that locked items needed to be given directly to a cashier for payment, according to the statement of facts.

At 5:12 p.m., Dughmosh removed a black-and-white ISIS banner from under her robe, tied a black bandana with an ISIS symbol around her head and slung the archery bow over her shoulder, according to the statement of facts. With the golf club in her right hand, she made her way to the store’s paint section.

Three store employees were in the paint section helping two customers when Dughmosh charged towards them, swinging the golf club repeatedly and shouting, “Allahu Akbar [God is Great].”One of the employees grabbed her arm as she was about to swing and wrestled the golf club away.

‘WHEN YOU KILL US, WE KILL YOU’

That’s when Dughmosh pulled the butcher’s knife from beneath her robe and began swinging against another employee, who managed to wrestle her to the ground. A fourth employee ran over to help and was able to pry the knife from Dughmosh’s hand as someone called 911.

“Why did you come in here?” asked employee Kyle Craig. “Because of ISIS?”

“Yes,” replied Dughmosh. “When you kill us, we will kill you … When you kill Muslims, you have to pay for it from your blood.”

Dughmosh went on to explain she’d previously tried to leave Canada to join ISIS but was turned back at the Turkish border, the statement of facts says.

“In the meantime, you’re going to kill people in Canada?” asked Craig. “Why, what’s that gonna give you?”

“Revenge … to stop killing Muslims in Syria and Iraq. You’re killing ISIS, I’m from ISIS,” Dughmosh said, according to the statement. No one was seriously injured in the attack. 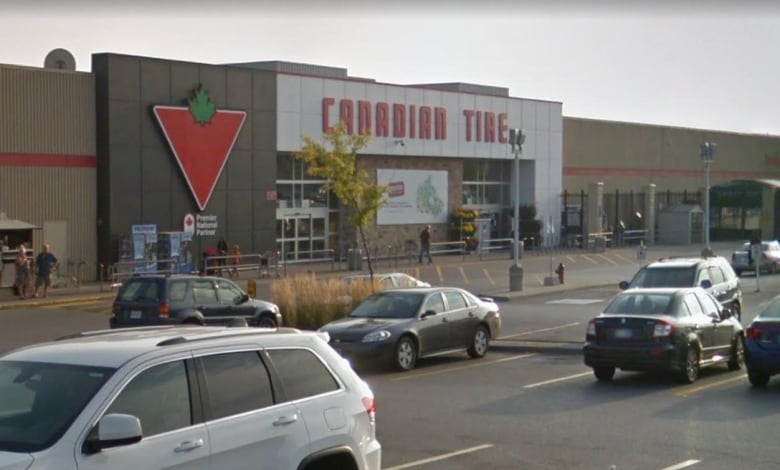 On the afternoon of June 3, 2017, Rehab Dughmosh walked to this Canadian Tire store at the Cedarbrae Mall in Scarborough. (Google Maps)

DISAPPOINTED SHE HADN’T HURT ANYONE

In the hours after her arrest, Dughmosh admitted the real reason for her April 2016 trip to Turkey. It was not to visit family. Instead, it was to join ISIS and live with them in the Caliphate.

Speaking to investigators with the RCMP’s Integrated National Security Enforcement Team (INSET), Dughmosh admitted she’d been an ISIS supporter since 2014, having made a unilateral pledge of allegiance to its leader Abu Bakr Al Baghdadi.

Canada has a blindspot when it comes to radicalization and hidden in it are political grievances, expert says

Dughmosh was interviewed by the RCMP the previous year, after her attempt to get to Syria via the Turkish border city of Gazantiep. But it wasn’t until after the attempted attack at the Canadian Tire in 2017 that investigators understood her intentions, according to the statement.

Dughmosh told investigators she was “disappointed” she’d failed to hurt anyone during the attack. But she was happy with what she’d done, she said. The important thing was to try.

A search of Dughmosh’s home after the Canadian Tire incident turned up a staggering array of weapons, including a black duffel bag with knives, scissors, and a child’s shovel converted into claws.

There was much more: a red cart with a hammer, two arrows, 31 barbecue skewers, 76 straws with screws glued to the tip; and a red bag containing 36 other handmade weapons.Investigators also found  two propaganda videos by the ISIS media arm, each viewed several times over in the previous weeks.

Dughmosh, investigators found, had also written a will. In it she asked that God “grant me martyrdom for His sake, for the elevation of his religion and to take revenge from the criminal infidels.”

Federal Crown prosecutor Jason Wakely read aloud the statement of facts to the jury. When he was finished, Forestell asked Dughmosh if she admitted to the details.

A jury is expect to begin deliberating on a verdict Thursday.

The Canadian Truckers Convoy For Freedom Is Getting Major Support From The People… & Now US Truckers! (Video)

10 Signs Indicating The US, The UK, Israel & NATO All Believe That We’re On The Precipice Of War With Russia