In the first time they made their official opinion known on the matter, the House of Representatives just passed an amendment started by California Democratic Congressman Rep. Jared Huffman that would restrict the displaying of confederate flags at cemeteries nationwide to just two days a year.

Shortly after midnight on Thursday, Huffman offered his amendment to prohibit the large-scale display of the Confederate flag in cemeteries run by the VA, such as flying the banner over mass graves. It would, however, still allow families to place small Confederate flags on individual graves on Memorial Day and Confederate Memorial Day.

“Over 150 years ago, slavery was abolished. Why in the year 2016 are we still condoning displays of this hateful symbol on our sacred national cemeteries?” Huffman asked while unveiling his amendment.

No one spoke in opposition to Huffman’s amendment during floor debate.

Every Democrat but one voted for the amendment, as did 84 Republicans. It passed, and will now make it’s way to the Senate.

The following thirdhand Tweet about an email sent to The Hill by Rep. Westmoreland’s legislative director Pete Sanborn is the closest thing to any public opposition anywhere that came out of House Republicans on this, just by the way. 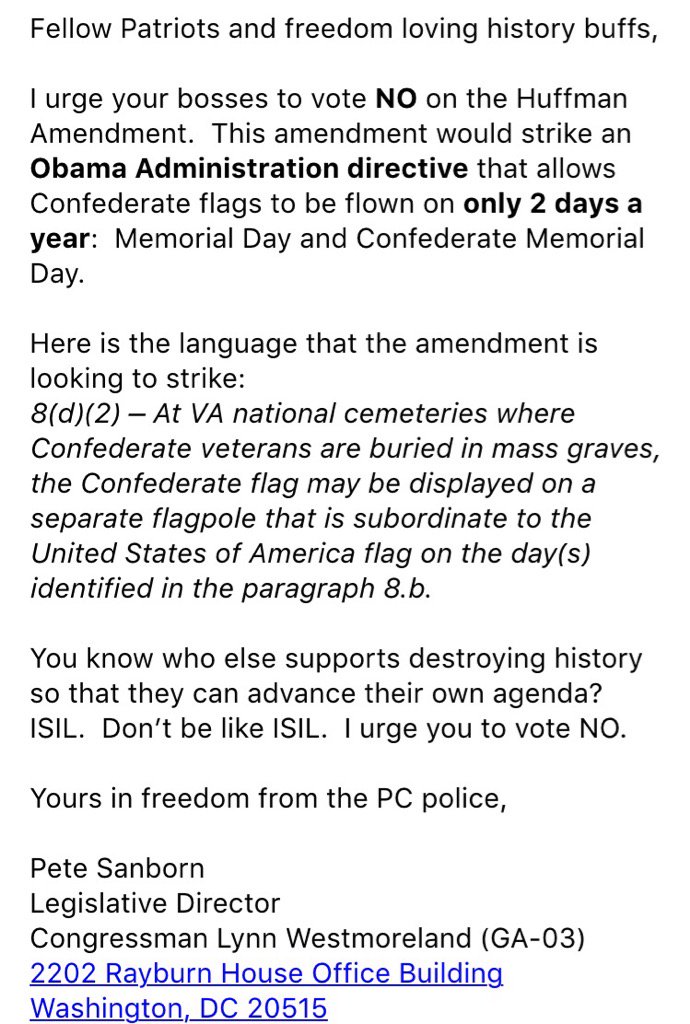 Rep. Westmoreland’s office later apologized for the “unprofessional language” about the likening of rewriting history to being like ISIL.

FALSIFYING HISTORY ON BEHALF OF AGENDAS

IN DEFENSE OF THE CONFEDERATE FLAG

Unearthed Video – CDC Official: “We’ll Just Get Rid Of All Whites In The US” Who Refuse Vaccines

GOVERNMENT SECRETS: TOP SECRET X-37B PLANE IN SPACE FOR A YEAR AND NOBODY KNOWS WHAT IT’S DOING UP THERE