Illinois: Muslim truck driver made “no attempt to stop,” crashed into 7 vehicles, killing 4

Last June, the Islamic State published a poster depicting an SUV driving over a heap of skulls and bearing the legend “Run Over Them Without Mercy.”

And the Islamic State issued this call in September 2014:

So O muwahhid, do not let this battle pass you by wherever you may be.

You must strike the soldiers, patrons, and troops of the tawaghit.

Strike their police, security, and intelligence members, as well as their treacherous agents.

Embitter their lives for them and busy them with themselves.

If you can kill a disbelieving American or European — especially the spiteful and filthy French — or an Australian, or a Canadian, or any other disbeliever from the disbelievers waging war, including the citizens of the countries that entered into a coalition against the Islamic State, then rely upon Allah, and kill him in any manner or way however it may be….If you are not able to find an IED or a bullet, then single out the disbelieving American, Frenchman, or any of their allies.

Smash his head with a rock, or slaughter him with a knife, or run him over with your car, or throw him down from a high place, or choke him, or poison him…. 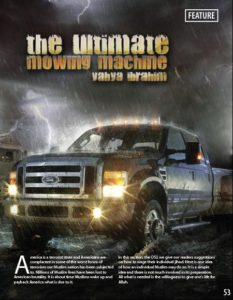 “Police: Greeley man behind wheel of truck in 8-vehicle crash that killed 4,” Associated Press, December 2, 2017 (thanks to the Geller Report):

HAMEL, Ill. — Illinois State Police say a Colorado man was the driver of a truck that crashed into several vehicles on Interstate 55 in southwestern Illinois, killing four people.

Police spokesman Calvin Dye Jr. says 53-year-old Mohamed Yussuf Jama of Greeley was driving the tractor-trailer when it crashed into vehicles that had slowed or stopped in a construction zone near Hamel on Nov. 21.

Dye told the Belleville News-Democrat that no citations had been issued to Jama as of Saturday. An investigation was continuing.

Jama’s 2016 Freightliner Cascadia slammed into cars on Interstate 55 with “no attempt to stop,” Dye said. The cars were slowed or stopped in traffic, ahead of the truck. The semi ran over some vehicles….

Abortion & the Soul of a Nation: Founder Of Planned Parenthood Envisioned A World With No “Traditions” Or “Moral Taboos”

Biden Regime & Their Willful Destruction Of The Country

Illinois: Muslim truck driver made “no attempt to stop,” crashed into 7 vehicles, killing 4