Home»US»Jeffrey Epstein’s Former IT Contractor Quite Over Disturbing Photos: “There Were Photos Of Topless Women Everywhere”
US/Videos

Jeffrey Epstein’s Former IT Contractor Quite Over Disturbing Photos: “There Were Photos Of Topless Women Everywhere”

Steve Scully, Jeffrey Epstein’s former IT contractor, claims that he ended his business relationship with the billionaire pedophile due to Epstein not only having tons of young women all across his private island, but also an extensive collection of photographs that displayed topless women all over the various buildings on the island.

“There were photos of topless women everywhere,” said contractor Steve Scully, who said he worked for Epstein for six years beginning in 1999. “On his desk, in his office, in his bedroom,” Scully, a 69-year-old father of three girls, said of the private island dubbed “Little St. James.”

In reminiscing about his former boss, Scully told Good Morning America, “He was the most intense person I ever met.”

Scully said that during his employment, he had visited the island more than 100 times.

Wow! It took 100 times to figure out how bizarre and twisted Jeffrey Epstein is? Ok then.

Of note, the FBI found a “substantial collection of photographic trophies of his victims (p. 12) and other young females” at Epstein’s Manhattan residence.

Scully told ABC News that he owned and operated a telecommunications business on nearby St. Thomas island when he was hired by Epstein to set up a communications network on Little St. James, also known as ‘Pedo Island.’ He visited the island over 100 times, and says that his memories of Epstein are ‘vivid.’

“He was the most intense person I ever met,” said Scully.

Epstein wanted phone or internet access nearly everywhere on the 72-acre island, Scully said, including in a secluded cove that the financier referred to as “the grotto.” Given his work in high-volume financial trading, Scully said, Epstein “never wanted a call to drop” because of weak digital coverage on the island.

The island’s primary compound was arranged in a “Danish style” layout — with individual bedroom suites in individual buildings surrounding a courtyard, Scully recalled, including a pair of large cockatoo statues lording over the island’s gardens. He said that at one point, he recalled Epstein wanting to change the name of the island from “Little St. James” to “Little Saint Jeff.”

According to Scully, that the strange ‘temple’ structure was actually a gym, which contained a massive framed photo of a topless woman. 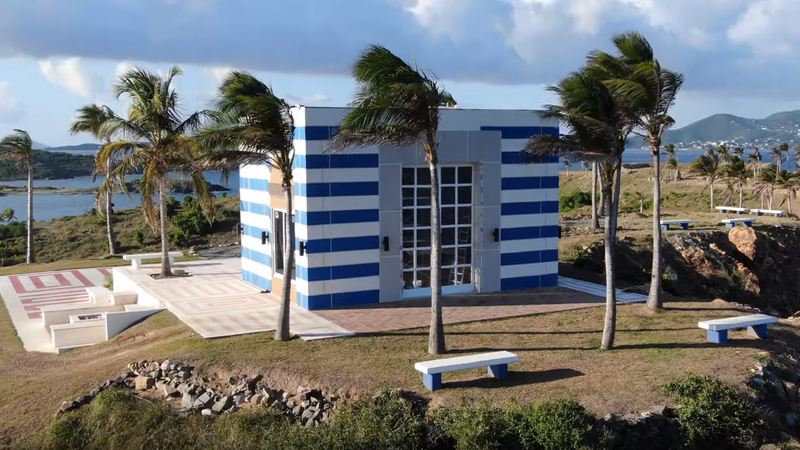 And we have to ask, were these women underage?  After all, Epstein has been busted on this before.

Investigative journalist Corey Lynn has reported on not only on the Epstein island but also on several others and how the Clintons are involved in a six-part series.

Epstein was arrested once again on July 6 on charges of sex trafficking minors.

On Thursday, his request to be released under house arrest pending trial with a bail offered at over half a billion dollars was denied by Judge Richard M. Berman.

From the Republican Party to the Democrat Party, many are involved with Epstein and there really should be some serious accountability, shouldn’t there?

Governors Endangering American Lives: New York & Washington DC Can Have All the Immigrants – All By Design

Jeffrey Epstein’s Former IT Contractor Quite Over Disturbing Photos: “There Were Photos Of Topless Women Everywhere”