Update 08-15-2020:  We have been able to locate that Ms. Weaver was indeed arrested and that information can be found here.  Below is a screenshot to verify. 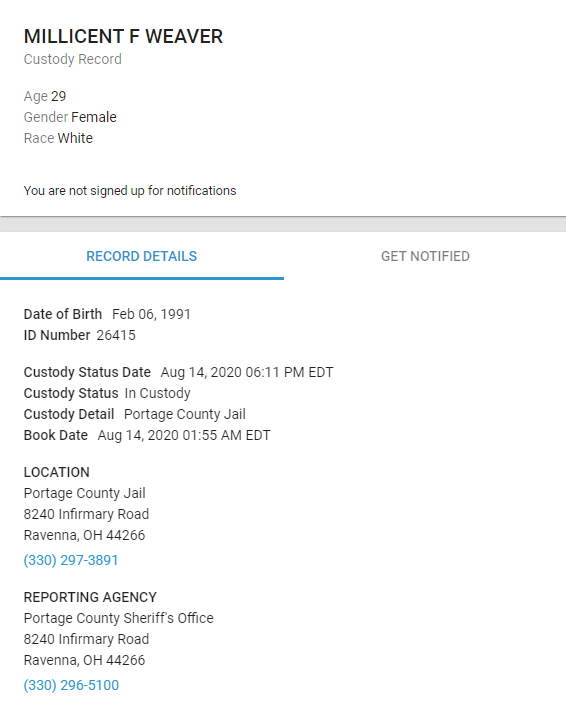 The investigative journalist that exposed the riots in Minnesota has now been arrested, along with her husband, just days ahead of their release of their Shadow Gate documentary, which exposed the corruption of politicians, big government and big tech government.  Millennial Millie, as she is affectionately known, was arrested, with cops claiming that she had been indicted by a grand jury for burglary on Friday.

The Investigative Report That Proves Minneapolis Riots Were Pre-Planned (Video)

Infowars reporter Millie Weaver uploaded a livestream video of a police officer showing up to her home claiming a grand jury indicted her and that she is under arrest.

Weaver said never received any notice and had no idea why she was being arrested.

“Guys, I’m literally about to break huge breaking news right now and I’m being arrested,” she told the camera.

Her husband, Gavin, can also be heard in the video above saying that they were being charged with burglary.

Yet, they had no idea of why there would be charges for burglary and the cops would not say either, which seems to be questionable as to what is going on.

The video below is live with Alex Jones reporting on it with one of the whistleblowers who provided information to Weaver and her husband.

Below is the description the Millie posted to her website in anticipation of release.  She wrote that it “may be the biggest whistleblowing event to date.”

The material presented in this documentary should concern people of all political affiliations given elected officials are not the shadow government. This is about real players who’s names never come up but should. Corrupt carrier politicians are definitely part of the beltway swamp, even aspects of the deep state, but they are not the shadow government. Two whistleblowers, who worked extensively within the Shadow Government as contractors have come forward with revelations that may be the biggest whistleblowing event to date.

Here’s her previous report proving the Minneapolis riots were preplanned.