Home»Uncategorized»Patriotism or TREASON? Linda Sarsour & Tish James In Their Own Words
Uncategorized

Patriotism or TREASON? Linda Sarsour & Tish James In Their Own Words

July 4, Independence Day is just days away. So I decided to transcribe Letitia (James) and Linda (Sarsour), to throw some light on their rabble-rousing accusations. BOTH claiming to be Proud Americans. Patriots who are RECLAIMING America. Saving our Constitution…. from those hateful, racist Republicans. Are you buying what they are selling? Maybe not, but sadly, there are buyers.

These two women, one elected to office and the other aspiring to do likewise, speak for the Progs — not the average Americans. The Soc/Commie Bernie Sanders Left, who masquerade as patriots, and (of course) the MSM, the press, LOVES them. So, too, does the Next Gen. Primed to resist, for the revolution.

Danger lurks in the hearts of the Millennial/Alphabet Gens that they court. Fed a steady diet of lies. Propaganda. Fake news. Fake history. They respond passionately with cheers. smiles and fist pumping. Ready for CHANGE as they take to the streets.

I witness the same scenarios over and over, nurtured at protest after protest by their Comrades-in-Arms: Insurrection. Treason. Fed to the masses through our media, our entertainment AND our schools. Better Red than Dead? NOT!

First up, the words of  NYC Public Advocate Letitia James. Then Linda Sarsour, the agitators this day at the Emergency Town Hall.

Letitia A. “Tish” James is an American lawyer, activist, and politician in the Democratic Party. She is the current and fourth New York City Public Advocate and first African American woman to hold citywide office. … Howard University School of Law. … admitted to practice law in New York state in 1989. James is the first member of the Working Families Party to win office in New York State and the first third-party member to be elected to the NYC Council since 1977. 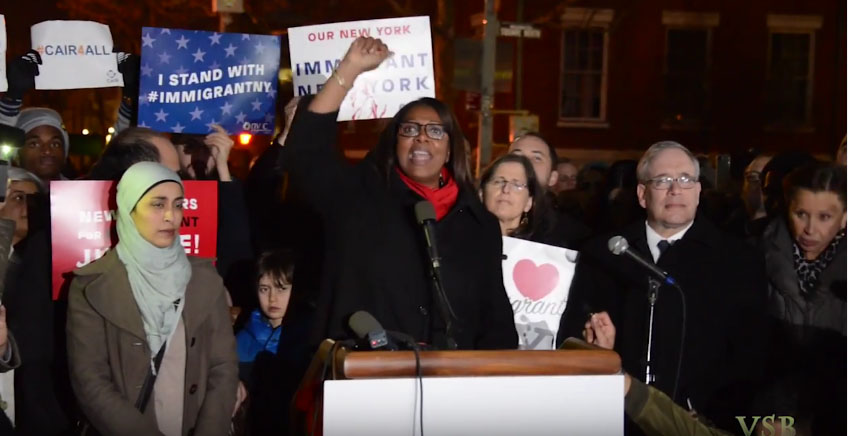 We’ve got an obligation and a duty to fight back… to protect the marginalized community and vulnerable community … we’ve got to protect those who they are coming after.

We’ve got to stand with them. Rise them. And let them know that THIS is the America that we love and we’ll FIGHT for it.

This is MY country and I will DEFEND the rights of immigrants and refugees. Mr. President, you and your Executive Orders, you have turned back progress for decades.  That puts you on notice, we will resist and we will ultimately see you in court.

I say to Donald Trump, you are NOT my President. I will resist you and stand up to you and I know there is an ARMY out there that will join me.

NEXT June 29, 2017 – recent quotes Letitia James – always like she was speaking to the Comintern.

(At) JFK airport to greet immigrants who are only seeking freedom and opportunity, we can not grow tired (or weary) now. We cannot cower now. WE cannot be fearful now.

We gotta rise up and resist with every fiber of our being […] because we are in a CONSTITUTIONAL crisis. We are at WAR with ourselves. This is not America. Our Values.

On this Independence Weekend let us rise up and DEFEND the Constitution. No Wall with separate us. No Ban will stop us.

Make sure individuals will feel welcome here. Comfort here. We will continue to embrace them.

We will continue to challenge this UN-Constitutional Ban by an illegitimate President [… ] because THIS is Democracy and THIS is what makes America great: ALL of us HERE together. (CHEERS)

I know these are very VERY troubling times. But we cannot grow weary. We cannot be afraid. Understand, we are all in this together. When they come after one group their going to come after ALL of us. So we must ALL stand together.

Say it loud say it clear that immigrants and REFUGEES are welcome here. They’re part of the HUMAN family.

This is nothing but a MUSLIM Ban. A Muslim BAN. So we need to say that MUSLIMS are Americans too and they need to be treated with respect. They need to know that the law covers them as well.

So I stand with you today. I hope to see you at the airport. As we raise our voices. As we continue to RESIST this administration [… ] and all that we stand for and all that we value.

And on the 4th – instead of going to a B-B-Q go to JFK. Instead of fireworks.Instead of taking a day off, sitting by the beach/lying in the sun: Go to JFK!  Let everyone know that we stand for something. That the Millennials – Gen  C ,  they believe in others. That it’s not about themselves. All will work together to make this a more perfect society.

What we must do together, stand up and defend America and its values. DEFEAT Islamophobia and all those who HATE people who are different. Diversity is our strength. We gotta celebrate that. Thank you for recognizing that ALL of us are Americans.

Let us rise up together. Let us stand together.”(CHEERS)

Letitia was followed by the keynote advocate for insurrection, Linda Sarsour.

—Sarsour, in her resignation letter from her position as executive director of the Brooklyn-based Arab American Association of New York.

“We are in a critical moment as a country and I feel compelled to focus my energy on the national level and building the capacity of the progressive movement, so it is with a heavy heart that I announce that I will be leaving my post as the executive director of the Arab American Association of New York.”

Linda Sarsour was born in Brooklyn, New York[2] and is the oldest of seven children born to a pair of “Palestinian” immigrants.

“I feel like I’m having the same conversation like – every week. I came here to say what I say to New Yorkers, and in any platform that I have (had?)  before the elections, THIS is NOT normal.

Remind yourselves that you live in a country with a President and an administration that is NOT normal.

This ban is a Muslim refugee ban. No other way to describe it.

As a country that passed marriage equality (sends a message) nobody gets to decide who our families are.  We get to say who our family is and what constitutes a bonafied relationship. We have people whose grandparents and aunts and uncles are their primary guardians.

When we allow the federal government to tell us who our family members are, we undermine the decades of work that people have done in this country, for us to define our families and what makes up the people that we love. (applause- cheers)

This ban impacts most directly the people who need us most – people who need critical medical care – who can die if they don’t come to this country and have access to the type of health care services we have.

This is a ban that keeps out the refugees – the very people – impacted by war and conflict that WE are instigating and fueling with our tax payer dollars and WE tell them they can’t come find refuge in our country.

We should be ashamed that there are people living in refugee camps – victims of terrorism and violence.  And we are telling them that they do not belong here and can’t come into our country.  I say we have to stay loud and outraged every single day.

I am fueled my perpetual outrage at this administration.

Sisters and brothers, our country has done horrific things to many communities BEFORE Muslims.  We have a history of doing unthinkable things to communities … a precedent that our nation has set forth  for different elements of our society. I want you to join me – to be part of the NEVER AGAIN generation. I will not allow horrific things to happen to any community on my watch or on your watch.

So, there was NO partial victory. There was NO limitation to this ban. There was just a rejuvenation of what this administration tried to do from Muslim Ban 1, Muslim Ban 2.0 and now we’re at the Supreme Court.

AND for those who know the history of the Supreme Court, THEY DON’T ALWAYS DO THE RIGHT THING.

If we have any folks resigning from the Supreme Court anytime soon – guess what – on the record – and this may not be the most professional thing you ever heard me say, WE ARE SCREWED.

If we have resignations in the  Supreme Court at this moment – all of our issues – from marriage equality, voters rights, reproductive rights, abortion, to immigration, to this ban – are ALL going to be rolled back.

I want you to stay woke. … as our black sisters and brothers teach us:  outraged. informed.

(Woke is a slang term that is easing into the mainstream from some varieties of a dialect called African American Vernacular English (sometimes called AAVE). In AAVE, awake is often rendered as woke, as in, “I was sleeping, but now I’m woke.” “Woke” is increasingly used as a byword for social awareness.) …. arggh….

Most importantly, you gotta stay united because our opposition is trying to divide and conquer us on issues. And what we’re saying to them is that we are intellectual enough. Loving enough.  That we will not be divided based on the issues we are most passionate —-  that we care about.

We will be intersectional in our organizing and we will show up for one another cause that’s what we do as the American people. (CHEERS)

So…what am I asking you to do? Three things:

And I will end by saying this, I am a proud American and the way that I express my patriotism is through DISSENT, because dissent is the HIGHEST form of patriotism.

SO, if you LOVE your country, you fight hard to make your country the greatest nation on earth, becauseright now this country has a far way of going —

Until we have health care for everyone who needs health care, women have full agency of their bodies,until we have immigration reform, until we end mass incarceration and UNTIL we become a nation that welcomes ALL immigrants in this country,  until then we are NOT the greatest nation on this earth.

== WHAT are they fighting for. WHOSE America?== 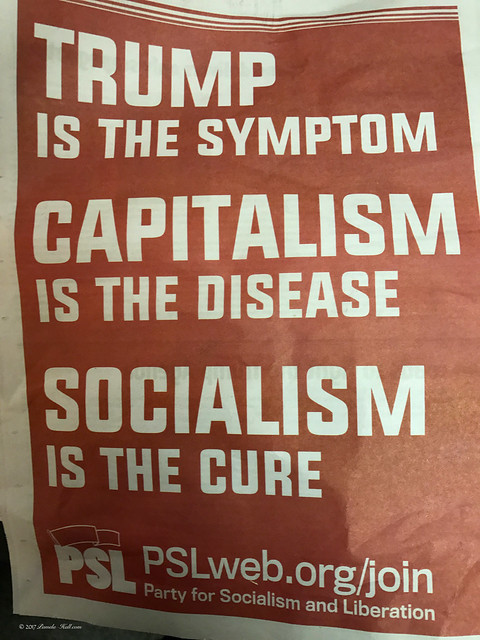 How Police & Teaming Up With Corporate Fascists To Spy On You

Patriotism or TREASON? Linda Sarsour & Tish James In Their Own Words