When 30-40% of your revenue is coming from Big Pharma drug hustlers, would you expect anything less than them using the leverage of their money against Mockingbird, corporate-owned media outlets to silence stories that are not in their best interest?  Of course, you would.  That is exactly what happened in the case of Kristi Dobbs, who was seriously injured by the Pfizer jab.

Megan Redshaw has the story at The Defender.

Kristi Dobbs, a 40-year-old dental hygienist from Missouri, said she can no longer work after being injured by Pfizer’s COVID vaccine. She has spent the past nine months pleading with U.S. health agencies to research the neurological injuries she and others are experiencing in hopes of finding a treatment.

But the story never ran because, according to the reporter, a “higher up” at Pfizer pressured the news agency to drop it.

Dobbs got her first and only dose of Pfizer’s vaccine on Jan. 18. She immediately experienced an adverse reaction on-site at the hospital clinic where her vaccine was administered.

“I had barely sat down in the monitoring area after the inoculation and felt an odd tingling sensation running down my left arm, where I had just received the jab,” Dobbs wrote. “I immediately had a pre-syncope episode, where I thought I was going to pass out, heart palpitations, increased pulse, increased respirations and a blood pressure spike that was within a stroke-worthy reading.”

Dobbs was monitored for an additional 45 minutes. When her blood pressure dropped to a manageable range, she was released.

Dobbs said the people monitoring her brushed off her symptoms as a panic attack or hot flash. But she had never been afraid of vaccines, blood draws or needles. “I gave injections in the mouth as a hygienist, so it was no big deal to me,” Dobbs said.

Three days later, Dobbs woke up in the middle of the night and thought her whole bed was shaking, but her husband said he didn’t feel it. She also noticed shaking and trembling in her left hand, but thought maybe it was due to having coffee.

The next day, Dobbs felt a stabbing pain in her left scapula, and shaking and trembling sensations in both hands. As each day progressed, her symptoms worsened. “By day 10, I was in excruciating pain,” Dobbs said.

On Jan. 28, Dobbs went to a chiropractor in St. Louis to see what was causing the stabbing pain in her scapula and the radiating pain and tremors in both arms. The chiropractor thought she had a rib out, so he adjusted her.

The next morning Dobbs woke up with extreme pain and tremors throughout her entire body.

“Urgent care doctor thinks I am having muscle spasms, and thinks I am stressed because of my mother in law [who was battling cancer] and traveling so much, so he [prescribed] Flexeril and Medrol dose pack.”

On Feb. 1, Dobbs visited a local chiropractor to see if she could help with the symptoms. As they were catching up, the chiropractor noticed Dobb’s tremors, body shakes and “super high” blood pressure.

“At this point I am having problems regulating my BP, and she knows that this is out of character for me. She asks me what I have done differently since I saw her last and I can’t think of anything, except the Pfizer vaccine.

“BINGO … That’s it, she says! She immediately stops and tells me that I need to get in to see my primary care provider.”

On Feb. 2, when Dobbs saw her primary care provider, she had visible tremors and whole body paresthesia. “[My care provider] had no clue if this could be vaccine-related, but didn’t dismiss the fact,” Dobbs said. “It was too new to tell, and she had no knowledge of any reactions.”

The doctor recommended anti-anxiety medication, ran labs, did a physical exam and sent her on her way. Shortly after, Dobbs experienced issues with heavy legs, and trouble walking and getting up stairs to the point she couldn’t feel pin pricks on her legs.

On Feb. 5, Dobbs went to the ER because she said she felt like she was dying.

Like many others who have experienced neurological reactions to COVID vaccines, Dobbs had a CT scan and the results were normal. No other tests were performed.

“Doctors did not dismiss that this was vaccine-related, but they had no clue what to do or how to treat it if it was,” Dobbs said. “I was given another anti-anxiety medication, which did nothing for me, and was referred to a neurologist. In the meantime my vibrations, brain fog and other symptoms intensified.”

Dobbs saw a neurologist on Feb. 12, when the nurse practitioner ordered tests, an MRI and blood work. The MRI was normal, and Dobbs was prescribed another medication. Dobbs began searching for answers on her own.

“I was searching for answers on my own, and I came across an article in Neurology Today with a comment at the bottom of the article from a retired gastroenterologist who had been injured by the vaccine, and she left her email address. That was the day I knew I was not alone in this vaccine injury journey. I had found Dr. Danice Hertz. She was in contact with a few others injured as well.”

Dr. Hertz said people like her who have been seriously injured by COVID vaccines are being ignored + because health officials won’t research their injuries + potential treatments, they have nowhere to turn.#TheDefender: https://t.co/zL66EdwTnDhttps://t.co/ahmaX2UiPF

Dobbs has seen more than 16 different medical providers, including an allergy immunologist, who took blood samples and discovered Dobbs had antiphospholipid antibodies — a group of immune proteins (antibodies) the body mistakenly produces against itself in an autoimmune response to phospholipids.

A dermatologist diagnosed Dobbs with granuloma annulare, an inflammatory skin condition caused by the immune response her body had, which left her with skin lesions.

One neurologist believed Dobbs was having an immune inflammatory response to Pfizer’s vaccine, caused by inflamed nerves.

Dobbs had an ultrasound of her kidneys, which showed they were not working properly. “My kidneys were holding onto water, but by the time I saw the urologist a month later the hydronephrosis was clear,” she said.

“No one knows what to do for me, or how to treat this vaccine reaction. I have really great doctors here at home, and as they have all said. ‘We don’t really know what to do, but we can try to treat the symptoms.’

“There is no medication or supplement strong enough to ease the pain, or control the constant symptoms that plague me 24/7. There is still no acknowledgement from NIH, CDC [Centers for Disease Control and Prevention], FDA [U.S. Food and Drug Administration], pharmaceutical companies, or any other governmental entity or institute that follows vaccine safety and side effects to date.”

There’s much more to her story that The Defender covers, including the fact that Pfizer was shutting them down at every turn and the usual suspects in government who get their campaign funding from Big Pharma outfits like Pfizer aren’t helping either.

Dobbs said she and others knew they needed to tell their stories, without causing “vaccine hesitancy,” to protect others from the same fate — so members of the group started writing and calling anyone who would listen, including reporters, news agencies and members of Congress.

“This is a hard thing to do without being labeled anti-vax, fear-mongering or a misinformation spreader,” Dobbs said. “But there was nowhere else to turn for help. A lot of us are so injured at this time, that the very thought of getting out of bed was exhausting. We had to persevere, so that we could be seen, heard, believed and most of all helped.”

Dobbs said they tried the best they could as simple Americans to reach out to those who would hear their stories. Finally, a reporter from a small media company was willing to do a story. Dobbs and others from the group participated in a 2-hour and 40-minute interview.

“The story never went anywhere,” Dobbs said. She said the reporter told them a “higher up” at Pfizer made a call to the station and pressured staff there into not covering any other stories about vaccine adverse reactions. 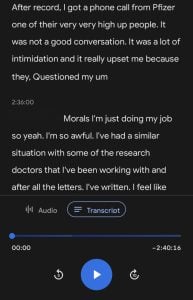 Dobbs said she emailed Dr. Peter Marks, director of the Center for Biologics Evaluation and Research (CBER) at the FDA, but never heard anything from him. She never received a response from Nath at the NIH either.

“I’ve been working my butt off to try and get my story out because I don’t want this to affect other people, but I don’t see how perfect strangers that were living normal lives found each other through social media, and there are thousands and thousands that have been affected, but you hear nothing about these stories. If it’s so safe then how have we found so many people on our own who have been affected by the vaccine?”

Dobbs did receive an email response from Dr. Janet Woodcock, director of the FDA, who said she was sorry to hear about her symptoms and that the FDA would look into the situation. “That was April 18,” Dobbs said. “I haven’t heard anything since.”

Dobbs also reported her adverse event to Pfizer, which did not follow-up, and filed a report with VAERS.

In June, Sen. Ron Johnson (R-WI) gave a few of the group members a platform at a press conference for the media to “hear us, see us and believe us,” Dobbs said. But “they wanted nothing to do with us.”

“Their only questions were about who paid for us to get to Wisconsin, and are we going to sue for compensation of injuries. No further questions about lack of medical care, what they could do to help bring awareness, nothing. We did get some other interviews with Newsmax and Fox, but again we were given a small platform for a moment and then hushed again. We move one step forward and get two steps back.”

Check out the complete story by clicking here.

"This Is Not A Negotiation!": School Board Served $200 Million Lawsuit Over Mask Mandate By Fed-Up Parents (Video)