She will not suffer politically in the slightest degree for this. In fact, for the left, support for jihad violence is mainstream, even heroic. 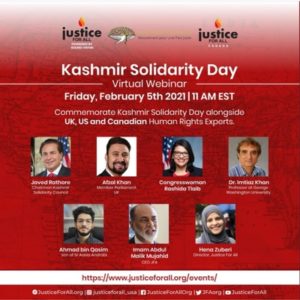 A Kashmir Solidarity Day event, dedicated to promoting the Islamist narrative on a decades-old conflict, drew the radicalized son of a prominent jihadist as well as a sitting member of Congress.

U.S. Rep. Rashida Tlaib, D-Mich., spoke at the Feb. 5 webinar sponsored by Justice for All, the activist arm of the Chicago-based multimedia company Sound Vision. Sound Vision is an offshoot of the proselytizing group, the Islamic Circle of North America (ICNA).

Tlaib discussed a 2019 voiding of a of a 70-year-old “temporary” provision that divided the disputed region of Jammu and Kashmir (J&K) into two federally-administered territories that are now governed directly by New Delhi.

She described “the horrific images, the horrific actions by the Indian government,” in the aftermath of the 2019 action. “We know that it [India] continues that form of oppression, not only … in Kashmir, but all around the country, but we are stronger when we come together and fight against those injustices.”

Tlaib’s comments fit into a broader campaign to misrepresent and exaggerate the situation in J&K.

India imposed political detentions, Internet and media restrictions after the status change to maintain order. Many of those restrictions have since been lifted and mainstream political figures released. Local-level elections were successfully conducted in the union territory in December.

Tlaib responded to India’s changes by introducing a resolution in Congress “condemning the human rights violations taking place in Jammu and Kashmir and supporting Kashmiri self-determination.” The resolution has not advanced.

Qasim described the Kashmir policy under successive Indian administrations as “evil” and claimed that “both in the Indian secular liberal imagination, and in the Hindu fascist imagination, Kashmiris are demons, they constitute the other, and they are killable people.”

His Twitter posts, that are now visible only to his followers, advocate Islamist insurrection in Kashmir.

“My dear mother, may you continue to agitate and frustrate the colonizer like you always have. #InternationalWomensDay,” Qasim wrote last March. Another tweet quoted Hizbul Mujahideen terrorist Riyaz Naikoo saying, “No colonial occupation has continued forever, and it is our firm belief that the Indian rule in Kashmir will also collapse sooner or later, until then, we will fight.”

A former top commander of the Jamiat-ul-Mujahideen (JUM) Faktoo was sentenced to life imprisonment for his role in the 1992 murder of prominent Kashmir Pandit (Hindu) human rights activist Hriday Nath Wanchoo.

The pro-Pakistan JUM emerged in 1990 as a breakaway faction of the U.S.-designated terrorist group Hizbul Mujahideen (HM) and is reported to have carried out terror attacks in J&K. Faktoo reportedly is a founding HM member.

Qasim’s mother, Aasiya Andrabi, is a hardcore pro-Pakistan separatist leader. She was arrested in April 2018 for running the terrorist organization Dukhtaran-e-Milat (Daughters of the Nation). In December, a National Investigation Agency (NIA) court ordered Andrabi and two of her associates be charged with sedition and conspiracy to commit terrorist attacks.

Dukhtaran-e-Milat, a banned outfit, has “called for jihad and use of violence against India,” India’s National Intelligence Agency said….

‘PELOSI ACT”: Pelosi Sells $3 Million of Google Stock Before DOJ Opens Lawsuit Against Google to Break It Up