As is always the case with exhortations such as this one, note how one-sided it is. Robert George tells Christians not to hate Muslims, which is a very good thing for him to tell them, but he never says a word about trying to get Muslims not to hate Christians. As far as this article is concerned, the onus is entirely on the Christian side to build bridges and make peace. One may argue that George is a Christian, and so he doesn’t presume to preach to Muslims, and that’s all very well, but where are his “dialogue” partners issuing similar exhortations to Muslims to regard Christians as friends and allies, and to lay aside direct and explicit Qur’anic commands not do so?

Here is that command: “O you who have believed, do not take the Jews and the Christians as allies. They are allies of one another. And whoever is an ally to them among you – then indeed, he is of them. Indeed, Allah guides not the wrongdoing people. (Qur’an 5:51) Does Robert George even know that this verse exists? Does he think there are no Muslims who take it seriously? The renowned and eminently mainstream Qur’an commentator Ibn Kathir explains it this way: “Allah forbids His believing servants from having Jews and Christians as friends, because they are the enemies of Islam and its people, may Allah curse them.”

Will Robert George’s dialogue partners tell him what they’re doing to mitigate the force of this passage and other anti-Christian material in the Qur’an and Hadith? Here is some information on Hamza Yusuf from Discover the Networks:

…In 1995, Yusuf described Judaism as “a most racist religion.” In 1996 he expressed his contempt for the United States:

“[America] a country that has little to be proud of in its past and less to be proud of in the present. I am a citizen of this country not by choice but by birth. I reside in this country not by choice but by conviction in attempting to spread the message of Islam in this country. I became Muslim in part because I did not believe in the false gods of this society whether we call them Jesus or democracy or the Bill of Rights.”

On September 9, 2001 – just two days before the al Qaeda attacks against America – UCLA’s Al-Talib magazine co-sponsored a benefit dinner titled “Justice for Imam Jamil Al-Amin” (a convicted cop-killer formerly known as H. Rap Brown) at UC Irvine. Among the speakers at this benefit was Sheikh Hamza Yusuf, who spoke about the fate he foresaw for America:

“They [Americans] were ungrateful for the bounties of Allah, and so Allah caused them to taste fear and hunger. That is one reason and, I would say, that this country is facing a very terrible fate. The reason for that is that this country stands condemned. It stands condemned like Europe stood condemned for what it did…. This country [America] unfortunately has a great, a great tribulation coming to it. And much of it is already here, yet people are too to illiterate to read the writing on the wall.”

At this same rally, Yusuf lamented that Sheikh Omar Abdel Rahman, the blind Egyptian cleric convicted of masterminding the 1993 World Trade Center bombing as well as unfulfilled plans to destroy various Manhattan bridges and tunnels, had been “unjustly tried” and “condemned against any standards of justice in any legal system.”…

Yusuf also…lamented “what happened in the 19th century with the abdication of Islamic Law and the usurpation of it … by western legal systems.”…

And here is some information on Ismail Royer from the Investigative Project on Terrorism:

According to a biography posted on IslamOnline.net, Royer began working as a CAIR communication specialist in 1997. According to media reports, he continued to work for CAIR at least through the beginning of October 2001.

When police stopped Royer for a traffic violation in September 2001, they found in his automobile an AK-47-style rifle and 219 rounds of ammunition. He was indicted in June 2003, with 10 others, on a variety of charges stemming from participation in the ongoing jihad in Kashmir. Specifically, the indictment charged that Royer engaged in propaganda work for Lashkar-e-Taiba and “fired at Indian positions in Kashmir.”

Lashkar-e-Taiba was designated a Foreign Terrorist Organization on December 26, 2001. Thus, while news reports indicated he still worked for CAIR, according to a federal indictment, Royer purchased an AK-47 assault rifle and 219 rounds of ammunition, distributed newsletters for a group later designated as a foreign terrorist organization, and fired at Indian targets in Kashmir.

In January 2007, in response to Senator Boxer’s withdrawal of the award to Elkarra, Awad claimed that “CAIR had no knowledge of Royer’s travels and activities before he joined CAIR.”

Additional charges listed in a superseding indictment against Royer and his 10 co-conspirators included conspiracy to levy war against the United States and conspiracy to provide material support to Al Qaeda.

On January 16, 2004, Royer pleaded guilty to weapons and explosives charges and agreed to cooperate fully with the government.

He was sentenced to 20 years in prison.

Royer got out early, of course, and now proclaims that he has rejected his previous “extremism.” All right. Will he start telling Muslims to reject Qur’an 5:51 and take Christians (and Jews) as friends? 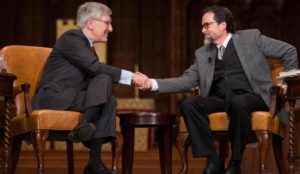 “Muslims and Christians must unite against hate,” by Robert George, America, October 4, 2019:

…First, Muslims worship God. Often, this is doubted or denied by Christians—even some Catholics. But the church herself unambiguously affirms it. Of course, as “Nostra Aetate” notes, Islam and Christianity differ in important ways in how they understand God. Christians believe God is a Trinity of persons. Muslims do not. Christians believe Jesus is God—the second person of the Blessed Trinity. Muslims do not. Still, the God whom Muslims (and Jews) worship is the true God. Second, the church has esteem for Muslims. One cannot hold in contempt those for whom one has esteem. Catholics are enjoined to eschew hatred for Muslims and oppose discrimination against them. We must recognize that most Muslims are decent, honorable people. Yes, there are evildoers who claim to act in the name of Islam while committing atrocities—and they must be resolutely opposed by all legitimate means, including the use of force. But we must not tar innocent Muslims with responsibility for their crimes.

Catholics are enjoined to eschew hatred for Muslims and oppose discrimination against them….

It has been my privilege and joy to work with Muslims like the Islamic scholar Hamza Yusuf, the author Suzy Ismail and Ismail Royer, the director of the Islam and Religious Freedom Action Team for the Religious Freedom Institute, in defending human life in all stages and conditions, beginning with child in the womb; in securing religious freedom for people of all faiths; in protecting refugees from persecution and terror; in opposing pornography and human trafficking; and in upholding marriage as the union of husband and wife.

I urge my fellow Christians of all traditions to remember how much we share with faithful Muslims—the vast majority of whom want for themselves and their children what we want for ourselves and our children: a peaceful society, a decent culture, a fair and flourishing economy, an excellent system of education and the freedom to worship and to bring our religiously inspired convictions concerning justice and the common good into the public square and to make our case, in freedom and peace, to our fellow citizens.

Christians and Muslims must, as never before, join hands to bear witness to God’s sovereignty, to God’s love for each and every member of the human family, to God’s desire that we lead upright lives.

Let Christians and Muslims never again regard each other as enemies. Let us rather recognize each other as brothers and sisters under the fatherhood of “the one God, living and subsisting in Himself; merciful and all-powerful, the Creator of heaven and earth.”

The Liver, The MonKeypox & Davos 2022 With Kate Shemirani (Video)

Center for Self Governance

Our Economic Misery Isn’t an Accident, It’s the Plan