Editor’s Note:  And the longer we leave our men and women over there among these savages, the more we open up opportunities for many of them to be converted.  We need to get out of the Middle East and remove every single practicing Islamist from our military because it’s a security threat.

Yet another convert to Islam gets the idea that his new religion commands him to commit treason and mass murder.

Why do so many converts to Islam keep getting this idea?

And why are law enforcement officials so completely uninterested in this phenomenon? 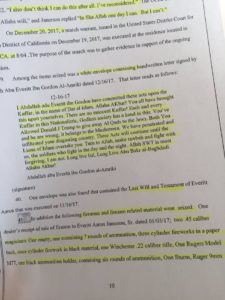 SAN FRANCISCO (KGO) — Officials have stopped a man who reportedly stated that “Christmas was the perfect day” for a terror attack in San Francisco and “did not need an escape plan because he was ready to die.”

We’ve learned the FBI has arrested a man by the name of Everitt Aaron Jameson from Modesto. According to a handwritten letter obtained by the FBI, Jameson also referred to himself as Abdallah adu Everitt ibn Gordon.

According to FBI documents, Jameson picked the Pier 39 location because he “had been there before and knew it was a heavily crowded area.” He added that it would be easy to “funnel” people into an area where he could inflict casualties.

Jameson reportedly said he was inspired by the New York terror attack on Oct. 31, when a man drove into a crowd and killed eight people, and the deadly 2015 shooting in San Bernardino.

And according to the documents, the suspect was discharged from the Marine Corps. He had prior military experience with a “sharpshooter” rifle qualification and expertise with rifle marksmanship….