Brandy Vaughan was former MERC Pharmaceutical representative and an anti-vaccine advocate at LearnTheRisk.org with a 9-year-old son who was intimidated, stalked and found dead in her home less than two weeks ago.  Many suspect foul play considering the nature of her stalkers.  But what really happened?

Currently, we know a full investigation has been launched into her death by the Santa Barbara Sheriff’s Office into the death of the “Former pharmaceutical insider on a mission to create a healthier world one person at a time by educating on the real risks of pharma drugs and vaccines.”

Coroners Detectives are conducting an investigation into the December 7th death of 45-year-old Brandy Vaughan of Santa Barbara. The decedent has been positively identified and the death is believe to be a result of natural causes based on an autopsy exam conducted last week.

While they claim her death is believed to be due to natural causes, that is far from what she feared and what friends say.

Erin Elizabeth of Health Nut News wrote on Twitter, “Rest in peace to my friend and fellow colleague and Activist and hero, Brandy Vaughan founder of Learn The Risk org. Brandi was just found dead by her only son, who is a minor, at such a young age. She posted publicly many times that if she were found dead it was foul play.”

She previously spoke with Vaughan about a vaccination reaction she had when she was three months old.

Toby Rogers, Ph.D., whose Twitter page talks about the “autism epidemic,” wrote on Twitter, “I’m devastated by the death of Brandy Vaughan. Her ‘Learn the Risk’ stickers are on my car & I pass out her cards wherever I can. She was a soldier & revolutionary who saved thousands of lives. Now she’s a martyr. Future generations will remember her sacrifice & revere her name.”

She had expressed many times in the past about her fear that someone was going to poison her,and even posted on Facebook that she wasn’t at all suicidal.#Rip #brandyvaughan December 8,2020 pic.twitter.com/pXjAgwjAQG

Vaughan’s final Instagram post on December 7 warns of what she said were the dangers of flu shots. “FLU SHOT LABEL ADMITS: NO DATA THAT THE SHOT DECREASES FLU,” she wrote. “At least one flu shot maker admits that there is no evidence that getting a flu shot decreases your risk of getting the flu. But the list of side effects from the toxic fu shot is long.”

That post came just a day before she died. “So she hasn’t posted in almost a year, then posts TWO days ago, and now she’s dead???” wrote a person in the comment thread.

Investigative journalist Ben Swann has produced a Truth in Media video on her mysterious death.

Some of the mysterious deaths of doctors mentioned by Swann that I reported on a while back include the following:

Another Doctor In A Long List Found Dead – Autopsy Being Performed

Erin Elizabeth of Health Nut News wrote about her friend and colleague in a report on her death.

Second update: Breaking: Santa Barbara’s sheriff office and coroner detectives have announced an office investigation into the death of Brandy Vaughan. Also a Santa Barbara doctor has come forward who treated Brandy and said she knew of no gallbladder issues which allegedly a friend said she told her she had (No other friends or family had heard this and were close with her up to the day she died). You can read our update by clicking here.

Editor’s Note: I have had the honor of getting to talk several hours with Tina Marie, Brandy Vaughan’s closest friend who I met through Brandy on one of our several meetups over the years. Brandy just spent Thanksgiving at Tina’s house where she had a wonderful big meal and they enjoyed much time together with Tina’s family. She seemed very healthy and happy. Unfortunately, I previously quoted some people who said they were very good friends of Brandy’s, who stated definitively that her parents were coming to pick up Brandy’s son. That seemed strange because I thought her parents were deceased. But then I thought maybe it’s a stepparent or someone I’m unaware of. Tina confirmed that yes, they definitely are gone, so I apologize as we rarely make mistakes like this in our articles. I should have known to go straight to the source of an actual best friend.

When I heard about Brandy’s death very early morning two days ago, I had her 415 cell number but didn’t want to call it. Especially since I understood it was in the possession of her nine-year-old son, who I have had the honor of meeting. Many people who sadly didn’t know him well appear to have been calling and texting and blowing up the phone on a poor child who had just found his mother who was deceased. I would ask people, except someone truly close to him, to refrain from calling any longer. Giving him some privacy would be much appreciated. His paternal grandparents are overseas at the moment and are in touch with his best friend and hopefully able to see him very soon.

Also, Brandy’s friends are working locally to get her pets out of the local sanctuary. A neighbor friend took in her son, but sadly her cats and dogs were placed an animal shelter. Please say prayers that none of them have been put down. Knock wood, it doesn’t appear so at this time. I am happy to help if they need my help getting them out of the shelter. I would also like to share the fundraising page that Brandy’s friend Tina has shared in her honor. You can find the link here. Our website has shared hundreds of GoFundMe’s, usually for either nonprofits or fundraisers after a holistic doctor or activist has died. Sadly, many of those were friends and colleagues of Dr. Mercola’s and mine, just like Brandy was. Of course, I have never taken a penny in donations from those nonprofits, nor have I ever asked for a penny for our site or mission. We believe in Tina, who I have known for years, and know that she will carry Brandy’s name on just exactly how Brandy specifically stated in detail she wanted. Below you will see that Brandy stated in black and white there would be a go fund me to investigate her death properly or do an independent autopsy which we fully support. Brandy was very specific about those requests including an independent autopsy, and we will report when those results come back since that will be the information we actually trust.

It is with such a heavy heart that I list yet another activist found dead, and this time it is my friend and colleague, Brandy Vaughan, the founder of the well-known non profit Learn The Risk. She was found dead by her son who is a minor.

Elizabeth also recommends that people view the following video about what Vaughan endured at the hands of those that wanted to silence her.

Ms. Elizabeth also wrote about her concern for Ms. Vaughan’s safety this year. Here’s an excerpt of texts the two had with each other.

Brandy had written me over the years stating that she was fearful for her life and asked me if I was and even said she was afraid of being poisoned. I have all this in writing although usually the authorities don’t come to me when my friends and holistic doctors are found dead on a regular basis. 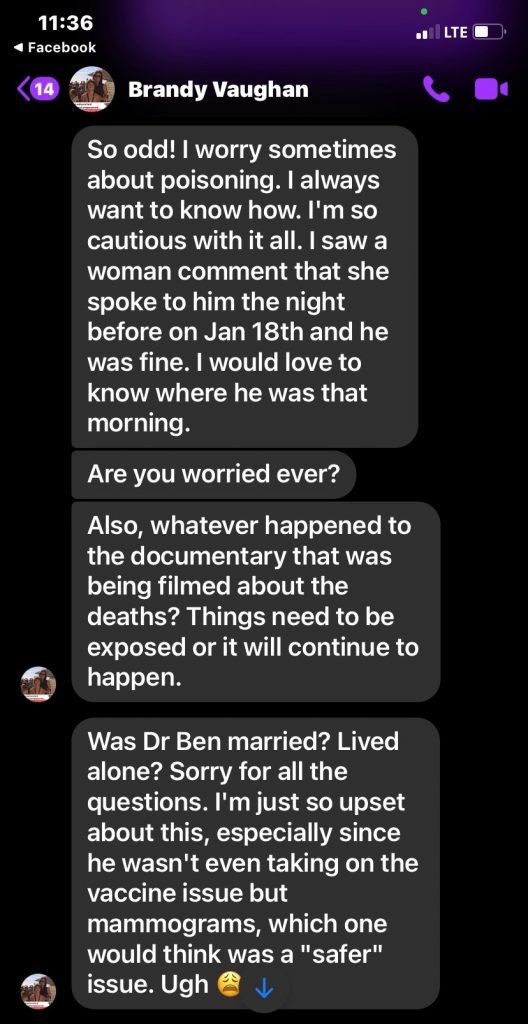 Alas, I don’t think they’ve ever come to me although I’ve had some good conversations with the authorities contacting them about the continued deaths that don’t seem to stop. I do not know the cause of Brandy’s death, and I am only stating factual information. 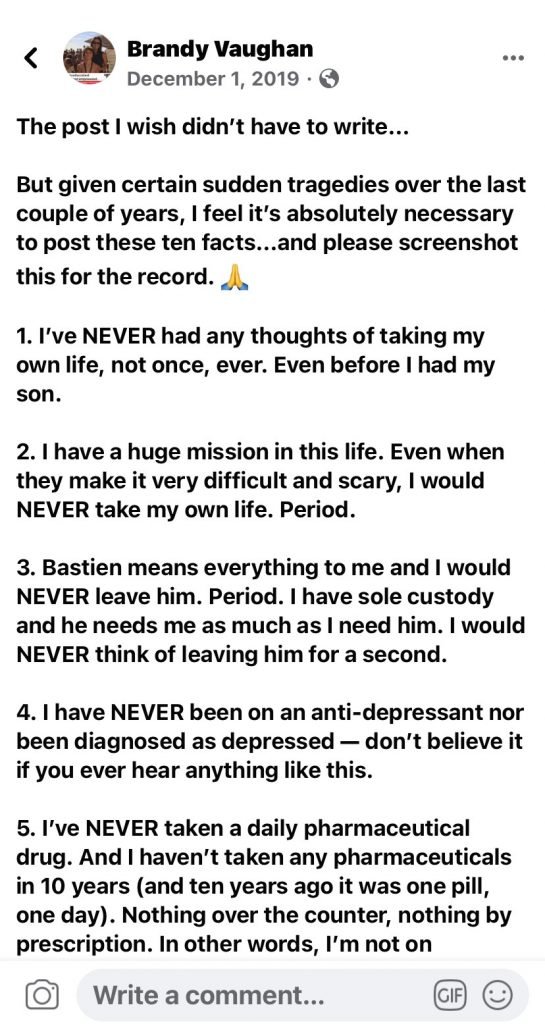 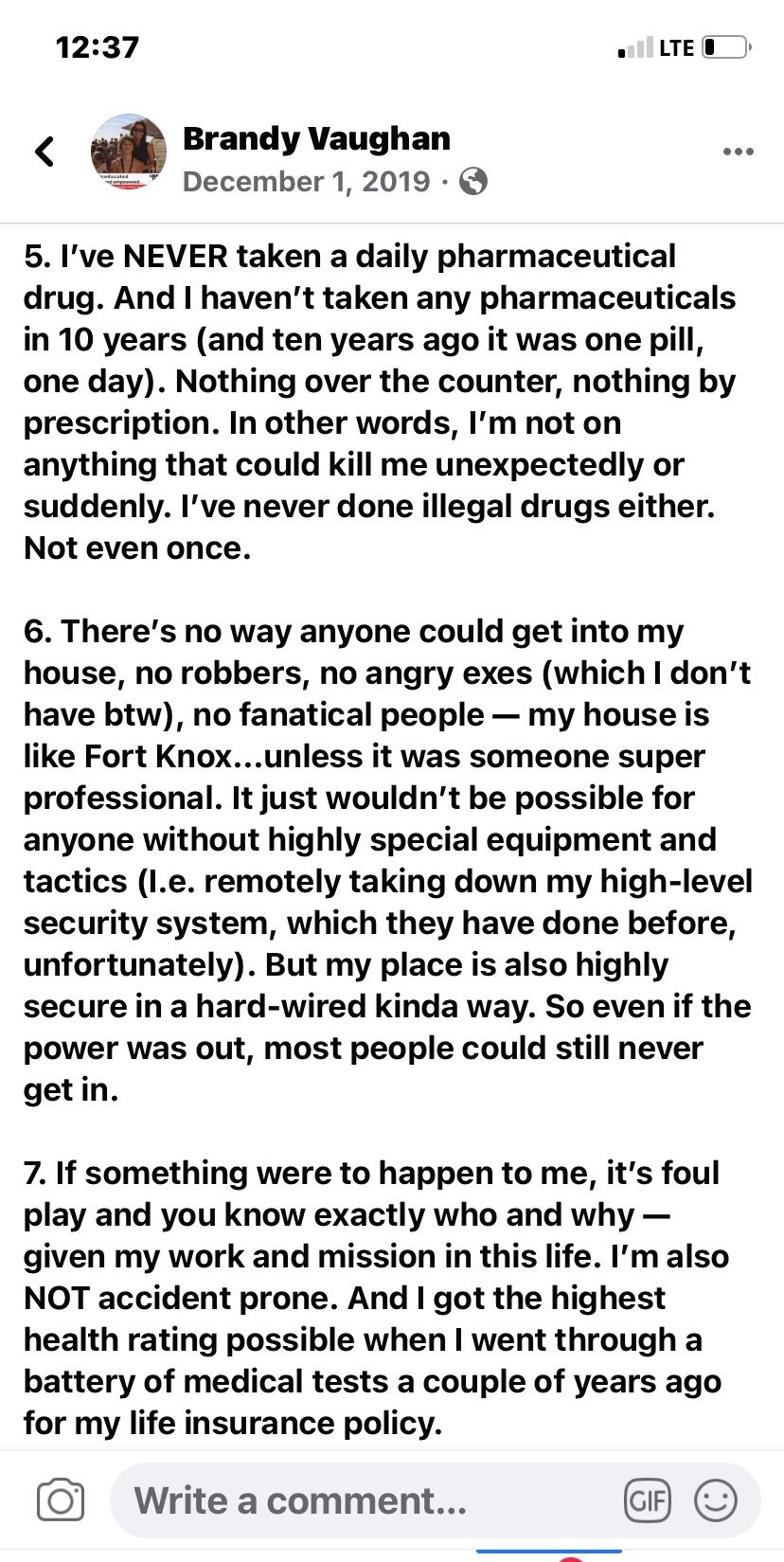 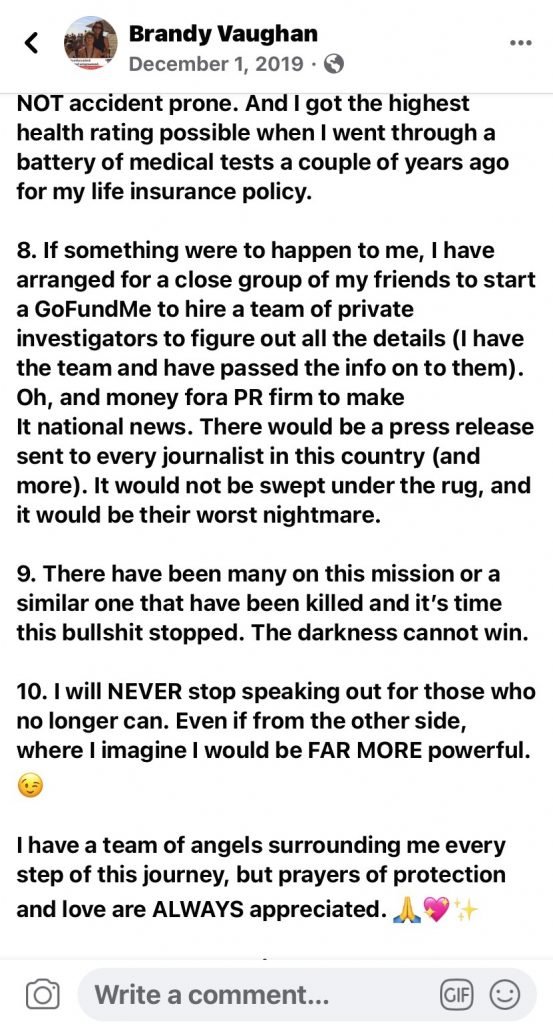 Tina Marie from Phoenix, Arizona started a GoGetFunding Page to raise money to keep the mission Brandy had started alive.

A great friend, amazing warrior, and loving mom, Brandy Vaughan of Learn The Risk has passed. Please send your prayers for her 9 year old son, her dogs, her cats… Her son was her world. Her son is in safe hands currently. We don’t have many answers yet — please try to avoid engaging in rumors out of respect to her and her son. Thanks to all who have been reaching out to offer condolences, and asking for ways you can help. We are so deeply saddened by this news.

The money will be used as per Brandy’s wishes (she always worried about leaving this earthly realm early):
* Any necessary legal action, autopsy, or paperwork filing. (To be determined)
* Helping to put on a memorial/funeral in honor of Brandy.
* Towards keeping her lifelong mission in motion!
Brandy had recently hired someone new to recreate her website, and the funds will help finish that project. We will need to pay for her storage for materials, until relocated. Mailbox fees. Possible legal fees and filing fees. New materials will need to be ordered, and we would like to put up several billboards in her honor… as a GIFT to this amazing soul.

I am a good friend, business supporter, and soul-sister to Brandy Vaughan. She has asked me many times over the years to take care of her son, and keep her mission alive, if anything ever happened to her. I will do my best to honor her wishes, and I need your help!! There is a small group of her closest confidents that she wanted to handle her affairs. We will not let her down! Her mission, is our mission!

This past Thanksgiving Brandy, her son, and their dog took a road trip to come spend the holiday with our family. We enjoyed an amazing dinner, played games, and laughed together into the wee hours of the night. She told me that this is what she always dreamed of for her son, to be part of a large family enjoying time together… and wanted me to raise him for her, if anything should happen to her (as she had asked multiple times in the past). This last time that she asked was exactly 8 days before her passing. She told me that she needed to get everything on paper and legalized soon, and would work on it when she got back home. My heart is broken.

Please do NOT entertain any drama — Brandy deserves to have her wishes HONORED! I will do my best to oversee everything that she asked me to take care of for her. I didn’t imagine me ever needing to follow through. My heart hurts, but I will fight for my friends honor!

Vaughan was brave in exposing the truth.

San Diego, keep your eyes open! Learn The Risk has a truck billboard…

Let’s not let her memory or the truth she spoke be forgotten!