On Sunday, My family and I attended a theme park in the evening and we were put through metal detectors for “security and safety” reasons.  On the same day, a shooting took place in Fort Worth, Texas that left two people dead, along with the shooter, and another critically injured at a church.  The same thing that occurred at the church could have also occurred at the theme park.

First, let me recap what took place at the West Freeway Church.  Video captured the moment a hooded man stood up from his pew, walked to the back, pulled out a shotgun and shot two men before being killed by an armed parishioner.

The Truth About Guns reports:

From the Associated Press:

Two people were killed in a shooting at a church near Fort Worth, Texas, on Sunday morning and a third person has been taken to a hospital in critical condition, officials said.

MedStar Mobile Healthcare spokeswoman Macara Trusty told the Associated Press that two people were fatally shot at the West Freeway Church of Christ in White Settlement. A third person in critical condition is being treated at a hospital and all of the victims are male, she said. MedStar is an ambulance service.

Authorities have not released any details about what led to the shooting.

An elder at the church told the New York Times that one of those killed was a security guard who responded to the shooter, calling him a dear friend.

“He was trying to do what he needed to do to protect the rest of us,” said the elder, Mike Tinius.

“It’s extremely upsetting to see anyone committing violence,” he added.

Tinius said he didn’t know the gunman and that the shooting appeared to be random.

A woman who answered the phone at the West Freeway Church of Christ told the AP she could not answer any questions and said she was told to direct inquiries to authorities.

Trusty said she was told by a supervisor at the scene that one of the people who died was the shooter. White Settlement police have not responded to AP requests for comment. In an interview with Dallas TV station KTVT, Mike Drivdahl, the spokesman for the Fort Worth Fire Department, said he believes the gunman was among the three who were shot.

Two more people were treated for minor injuries at the scene, Trusty said.

White Settlement is about 8 miles (12 kilometers) west of Fort Worth.

It is not the first deadly shooting to take place at a church in Texas. In November 2017, Devin Patrick Kelley opened fire on the congregation at a church in Sutherland Springs, Texas, killing more than two dozen worshippers, before taking his own life.

Multiple reports are coming in of a shooting at the West Freeway Church of Christ in Fort Worth, Texas this morning. A man carrying a rifle walked into the church and fired three times.

From the Dallas Morning News:

The shooter was reportedly stopped by armed security in the church.

NBC Dallas Ft. Worth reports on the identity of the shooter.

The man who fatally shot two people at a White Settlement Church on Sunday before being killed by church security has been identified as a 43-year-old Keith Thomas Kinnunen, a River Oaks man with a criminal record, according to two law enforcement sources.

Kinnunen is believed to have been wearing a disguise, including a fake beard, when he stood up, pulled a shotgun from his clothing and opened fire inside the church, killing 64-year-old Anton Wallace, a church deacon from Fort Worth, and 67-year-old Richard White, of River Oaks.

71-year-old Jack Wilson was the man who stopped the murders.  Posting on Facebook, Wilson said wrote, “The events at West Freeway Church of Christ put me in a position that I would hope no one would have to be in, but evil exists and I had to take out an active shooter in church.”

Listen to his interview.

The point in all of this is I told my kids as we entered the park, not knowing what was going on in Texas that is was a fascade of a feeling of “security and safety” to disarm you anywhere.  If a criminal wants to get in with a weapon he can and disarming law-abiding citizens does nothing to stop evil people who are intent on doing you, your family or your neighbors harm.

In fact, as I was going into the park that just a week prior I attended with the same “knuck,” I was told I couldn’t take it in.  Here’s what it looks like. 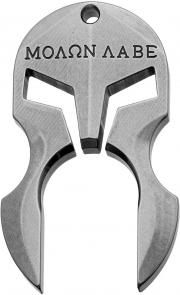 If you are interested in getting one, contact me and I’ll get one out to you at a cost.

It simply will allow for your middle finger in the center and index and ring finger around the sides in case you need to use your bare hands against someone when you are not armed.  Otherwise, it’s a nice decorative ornament for your keychain.

When the gentleman told me I couldn’t take it in because it was a weapon, I grabbed my keys up and inserted my key through my fingers to make a point, allowing the blade of the key to be used in like manner to this “knuck.”  He immediately got the point, asked his supervisor about it, and they let me in.

Now, just think for a moment.  Suppose I did want to cause someone harm.  How many people could I attack with the above device or a set of keys for that matter before anyone could stop me?  probably quite a few in a waiting line.  But I’m not out to harm anyone because I want to obey the law.

So, whether it is a park, which, by the way, used to never put people through metal detectors, a church, a government building, a school or pick your public or private place, and there is nothing to fear from an armed, law-abiding citizen.  Why?  Because they are law-abiding.

“Yes, but there are criminals, Tim.”

Precisely, and criminals will violate your “laws” and kill unarmed people because tyrants want you to “feel safe and secure” rather than actually leaving you alone to exercise your God-given right to keep and bear arms and actually be safe and secure.

Across the country, state legislatures, and the federal government are continually trying to regulate or restrict your right to carry a gun in a church or a state park or government building.  Theme parks such as  Universal, Carowinds and others are seeking to disarm you for the sake of “security.”  None of that is very safe or secure when the bad guy shows up with a weapon and you are left defenseless, is it?

So, while we praise the good guy in what happened on Sunday and mourn the loss those killed, know that this could have been a lot worse if the tyrannical pretended legislation of some individuals had their way concerning guns in churches.

You have the right to carry anywhere and everywhere and only those who will not uphold their oath of office seek to infringe on the right, even that duty you have to defend life, to keep and bear arms everywhere you go.

Authoritarian Madness: The Slippery Slope from Lockdowns to Concentration Camps