There is a convenient technical problem in doing so.

I did make several attempts on Monday Evening.

Here is a screenshot. 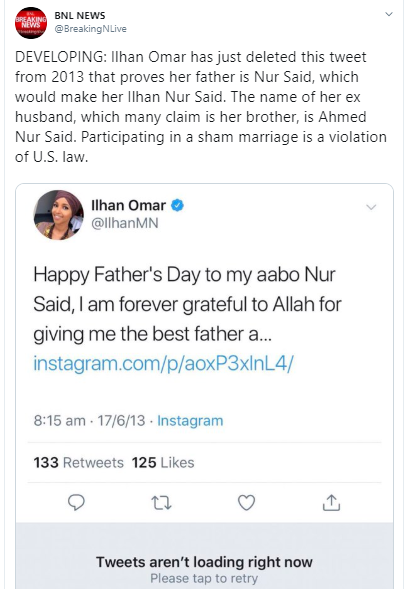 Who is Nur Said you ask?

In addition to being Ilhan Omar’s admitted Father, he is a suspected terrorist and there are reports that he is currently living in the US.

Here’s more from The Blaze:

Fanning the flames of the controversy surrounding a prior marriage, Rep. Ilhan Omar (D-Minn.) deleted a tweet Tuesday morning that wished a Happy Father’s Day to a man named “Nur Said,” who is at the center of the controversy regarding her former marriage to Ahmed Nur Said Elmi.

What are the details?

Allegations regarding Omar’s alleged immigration fraud have surrounded her since she came to prominence as a progressive figure with her election as a freshman Democratic representative in 2018. It is undisputed that Omar, along with at least part of her family, emigrated to America from war-torn Somalia in 1995.

Much of the remainder of Omar’s personal history remains shrouded in mystery due to Omar’s reluctance to discuss many of the details and shoddy Somali record keeping. In 2009, she married a man named Ahmed Nur Said Elmi, whom she ultimately divorced in 2017.

Although Omar has never explicitly denied that Nur Said Elmi Mohamed is her father, the deletion of a 2013 post on Twitter wishing him a happy Father’s Day immediately raised eyebrows.

Jon Levine, who writes for the New York Post, also pointed out that web archive still has the tweet, which was originally posted on June 26, 2013.

Ilhan Omar is the current Congressional Queen of Controversy.

A complete list of her current controversies, political and personal, might be 100 links so here are some of the highlights.

Now one of her old tweets has been uncovered which may tie her to a terrorist Father who is rumored to be living in the United States.

She deleted the Tweet shortly after it was found.

Ilhan Omar is a criminal and an enemy of America.

She needs to be arrested and deported.

However, it would be nice if someone other than Larry Klayman carried the torch.

Have you noticed Larry never seems to win any of his high-profile lawsuits?

He seems to be more concerned with fundraising than winning.

But that’s the subject of a future article.

As Big Tech Censored Doctors & Scientists, 2021 Set A Record For Child Sexual Abuse On Their Platforms

The Guardian Finally Makes A National Story About Lee County Sheriff Carmine Marceno's Crimes That We've Reported On For Months! - Will Gloria Allred Be Next?