Home»World»Tommy Robinson Writes Letter From Solitary Confinement: “The Judge Convicted A Journalist That Had Zero Impact On The Trial”
World

Tommy Robinson Writes Letter From Solitary Confinement: “The Judge Convicted A Journalist That Had Zero Impact On The Trial”

Tommy Robinson has become somewhat of a living legend in his stand against the tyranny and Islamization of his country of England.  He was arrested and sentenced in a matter of hours and thrown into prison along with Muslim jihadis after reporting outside a courthouse on a Muslims rape gang trial.  Robinson had only reported public information, and though the judge agreed that his reporting had zero impact on the trial, she still sentenced him to jail.  However, Robinson, though imprisoned in a “prison without a prison,” as he referred to it, penned a letter about his ordeal.

One would be wise to listen to how the UK government has targeted one of their own while allowing the antichrist religion of Islam to flourish and terrorize the people they are supposed to serve.

“I’ve been held in total isolation since the moment I entered Belmarsh. I’ve not seen another inmate; I’m held in prison within a prison,” Robinson said. “I believe the unit that I’m held on was built for IAN HUNTLEY! Other prisoners that have been held here are Abu Hamza and Michael Adebalago! [sic]”

Peter M. D’Abrosca reminds us, “Huntley murdered two 10-old-girls in 2002, and Hamza was a terrorist Islamic preacher who was convicted in Britain 2012 for inciting violence and racial hatred. In 2015, he was convicted in the United States on 11 terrorism charges and sentenced to life in prison. Adebalajo was a Muslim convert who killed a British Army soldier in 2013 and was sentenced to life in prison.”

D’Abrosca goes on to write, “Robinson seemed to be surprised that he was being held in the same cell as such criminals, given that his crime essentially boiled down to filming on the street. The official conviction, for which Robinson was originally jailed and released in 2018, was for contempt of court. Robinson was allowed out of jail last August while his conviction was appealed. He lost his appeal and was sent back to jail last month.  He is being held at HMP Belmarsh, a prison in Thamesmead, London.”

“The staff at Belmarsh have been great, the governor has made sure all of my rights are recognised, to be honest he’s making the best of a difficult situation having me as a prisoner,” wrote Robinson.  “I am 100% safe; this is a totally different sentence to my last in HMP Onley.”

Robinson also went on to elaborate on the injustice he faced concerning his conviction.

“Let me quote you WORD FOR WORD what the Judge at the head of the Queen’s bench division said during her summing up,” he wrote.  “Let me just point out first that she was promoted to this position just two weeks before my trial! ‘the contempt’s we have found proved were NOT ones of deliberate defiance, there was NO intention to interfere with the administration of justice and in the event neither the Akhtar trial or the trial that followed were prejudiced.’”

“What she is saying right there is that she convicted a journalist of making a mistake that had ZERO impact on the trial,” Robinson added.  “Even my enemies can see that serving five months on solitary confinement for what she describes as not deliberate is simply not fair.”

“I contest that I even broke any law, it’s simple for those watching the video that the punishment does not fit the crime sorry, my so-called ‘mistake’,” he continued.  “I’ve not actually been convicted of a crime, it’s a civil offence! The judges who sentenced me went against the law, they judged AGAINST what the law says on their own website!”

Now, Robinson is appealing his case to the British Supreme Court, even as tens of thousands protest in support of him under the hashtag #FreeTommy.

“It would be impossible to fight the establishment without your help and love. My wife’s view is that it’ll be another trial more stress and kissing the kid’s goodbye again, but for me, another trial is another chance to expose their lies,” he wrote. “I have to fight it! I just hope you’ll see it is important as I do as it’s a crazy amount of legal costs. Without your help and support, I’m sure I’d already be a broken man, but instead, I’m pumped and ready for round three. The establishment relies on the fact that they don’t think we’ll be able to afford to keep in the fight, so I will ask you to share this everywhere. I’m asking once again, help me fight the establishment! It’s death, prison or glory.”

Read his full letter below.

Here are the copies of the hand-written letter provided by TR.News. 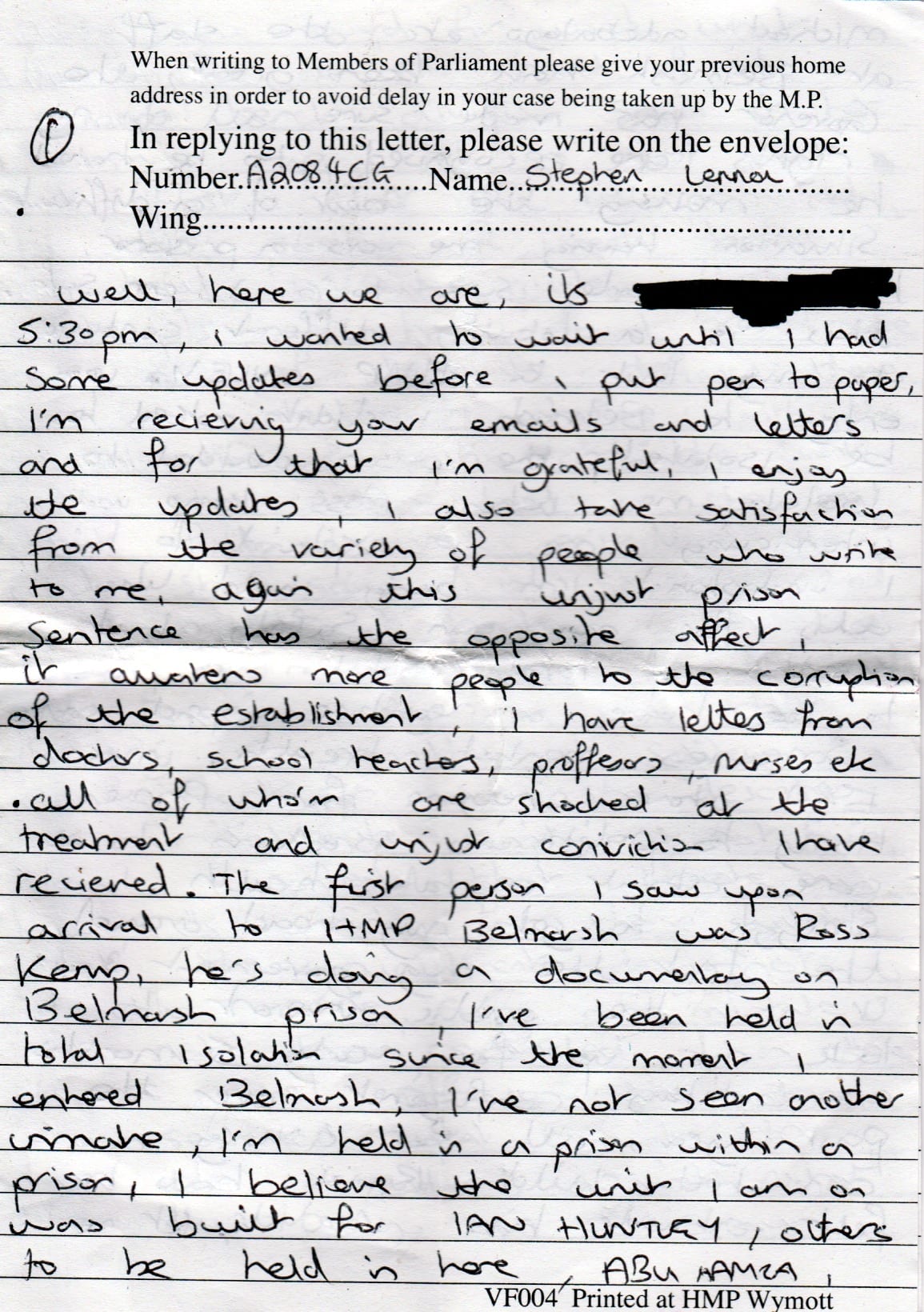 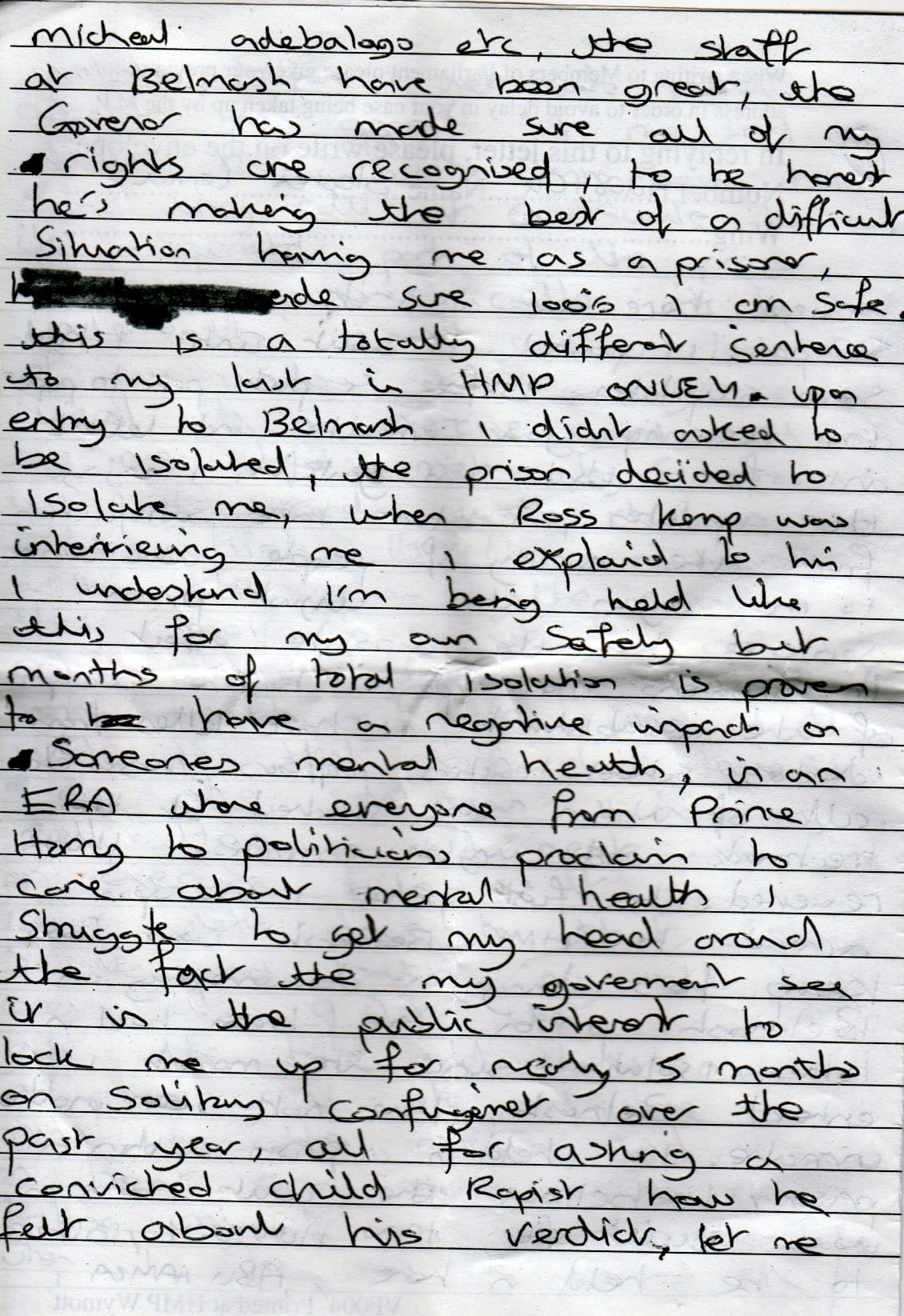 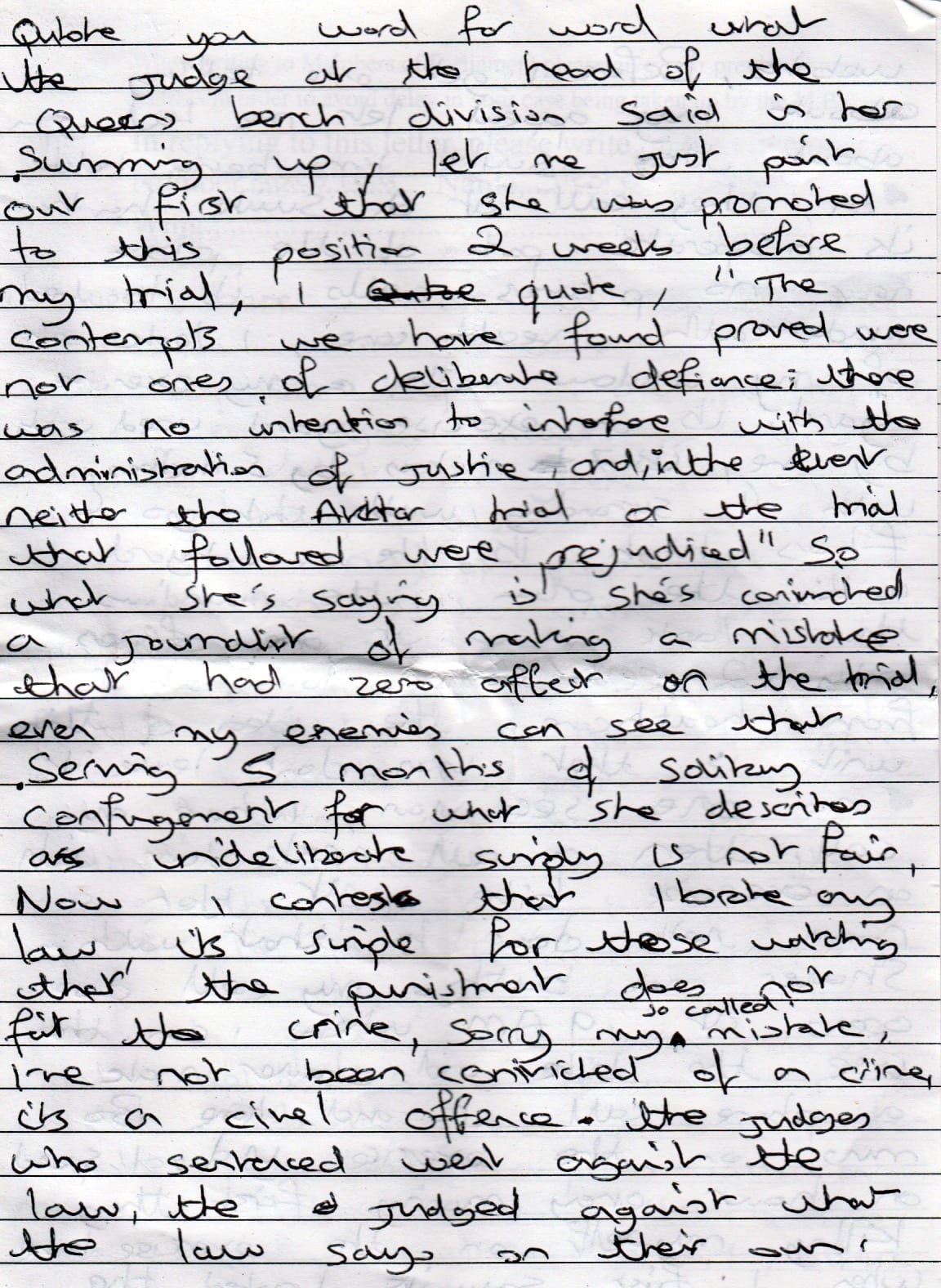 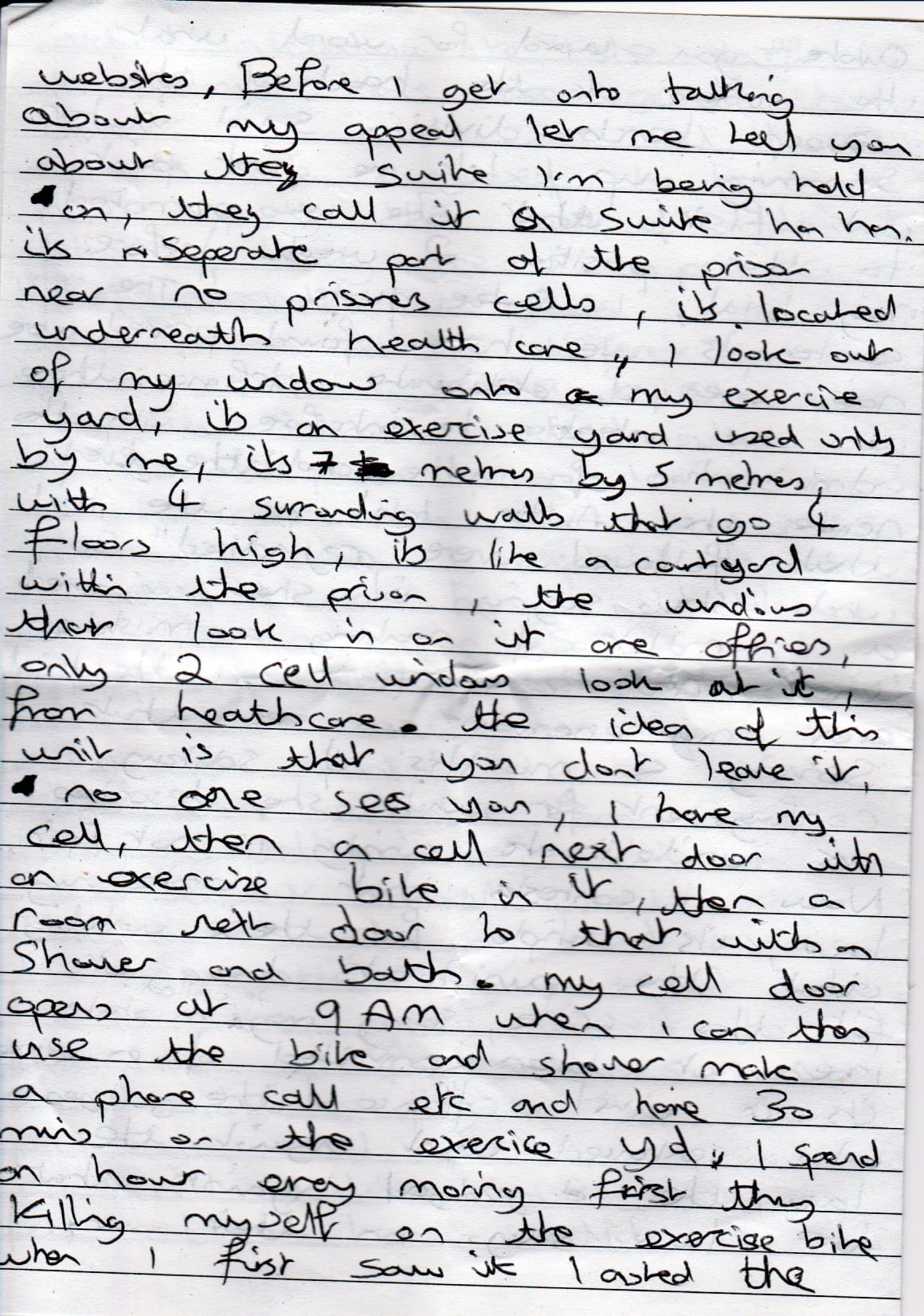 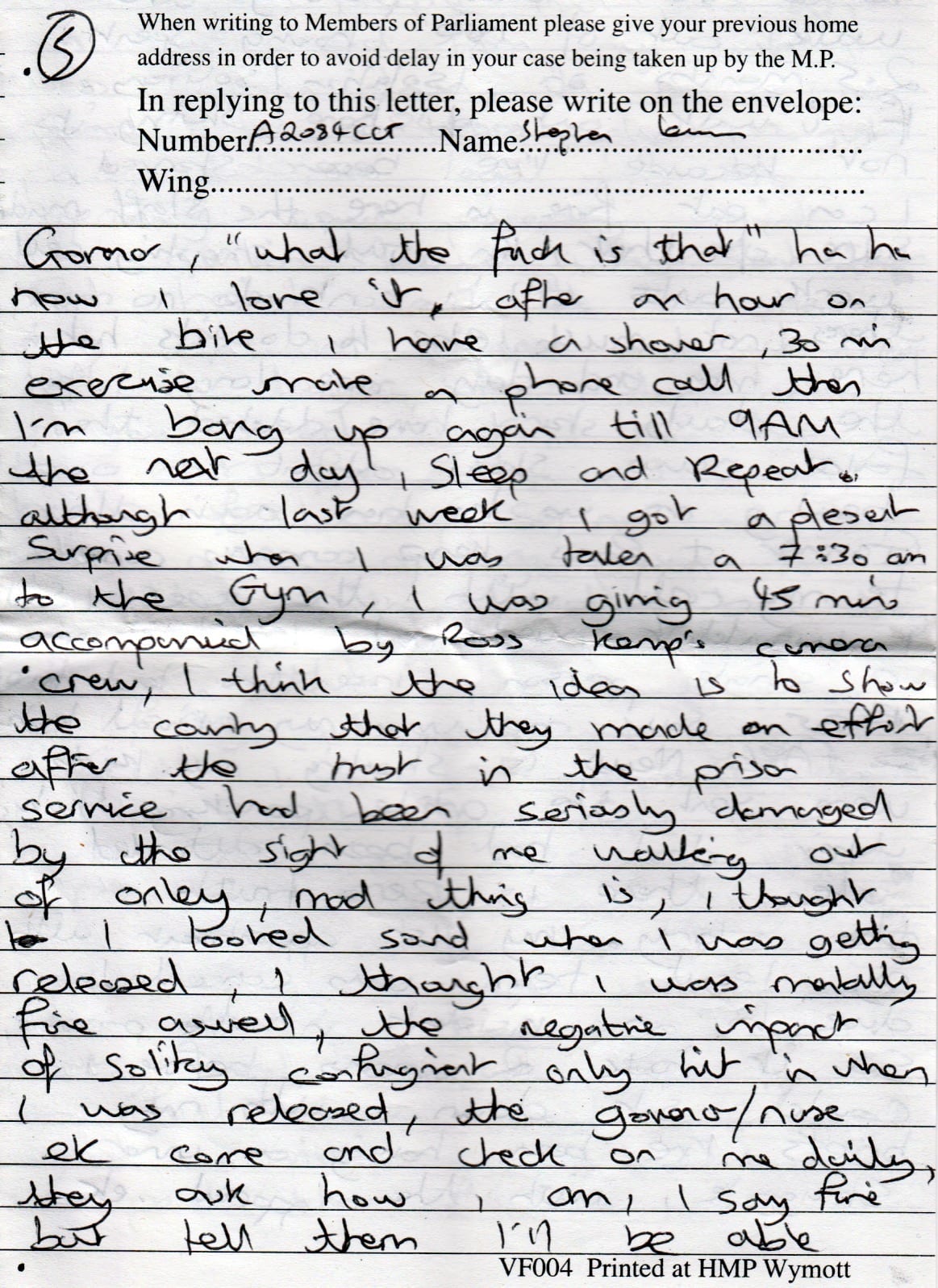 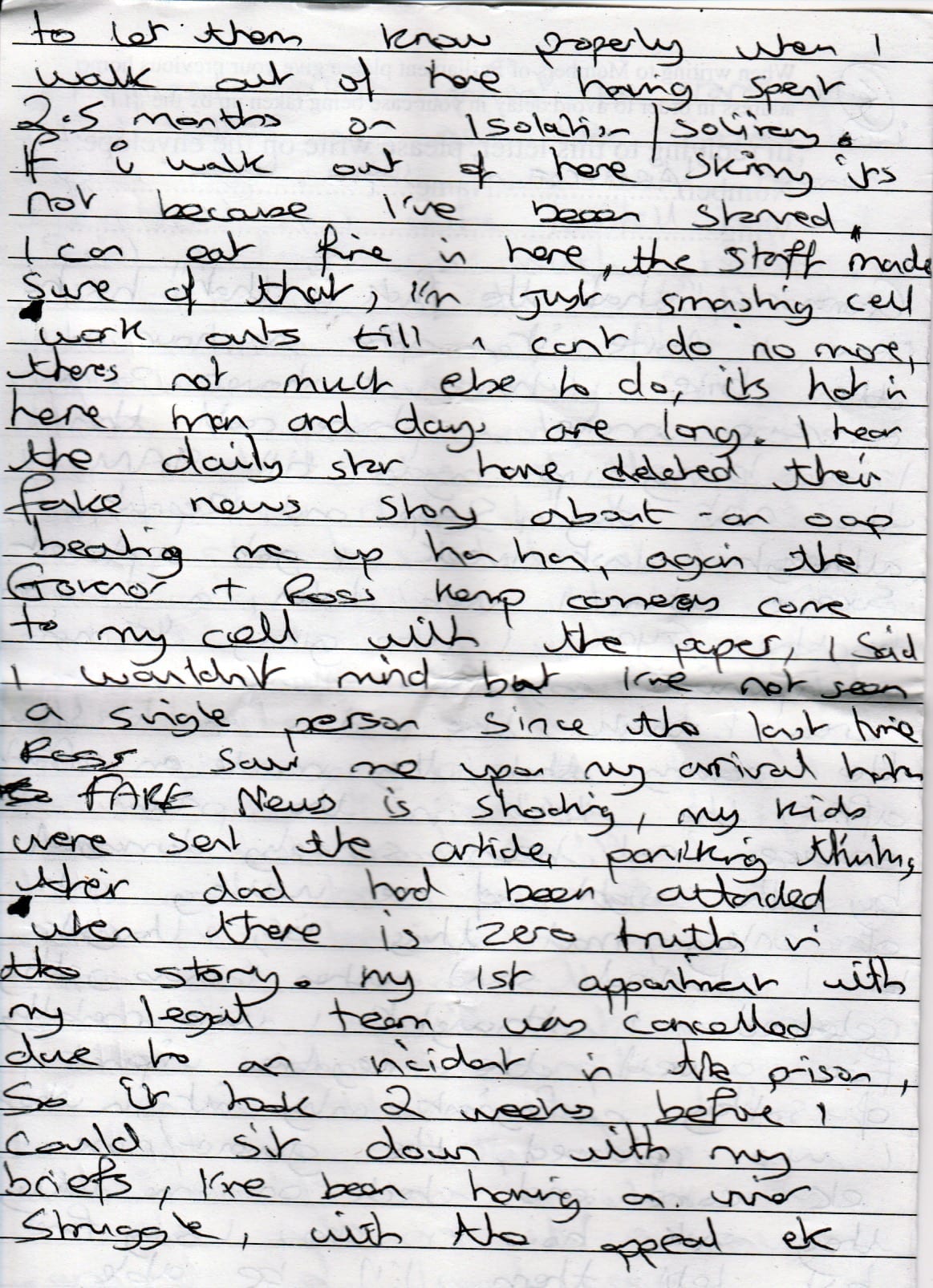 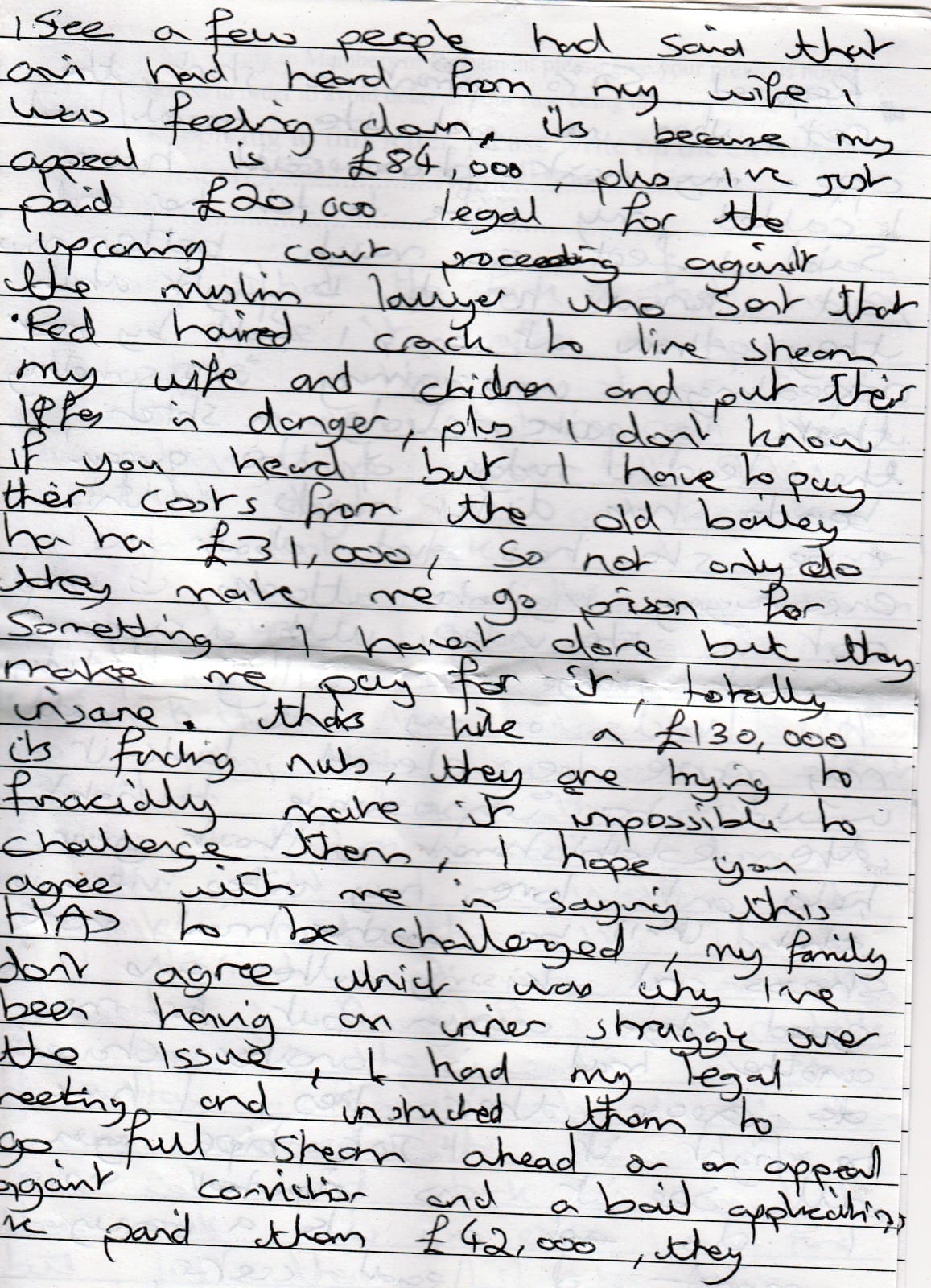 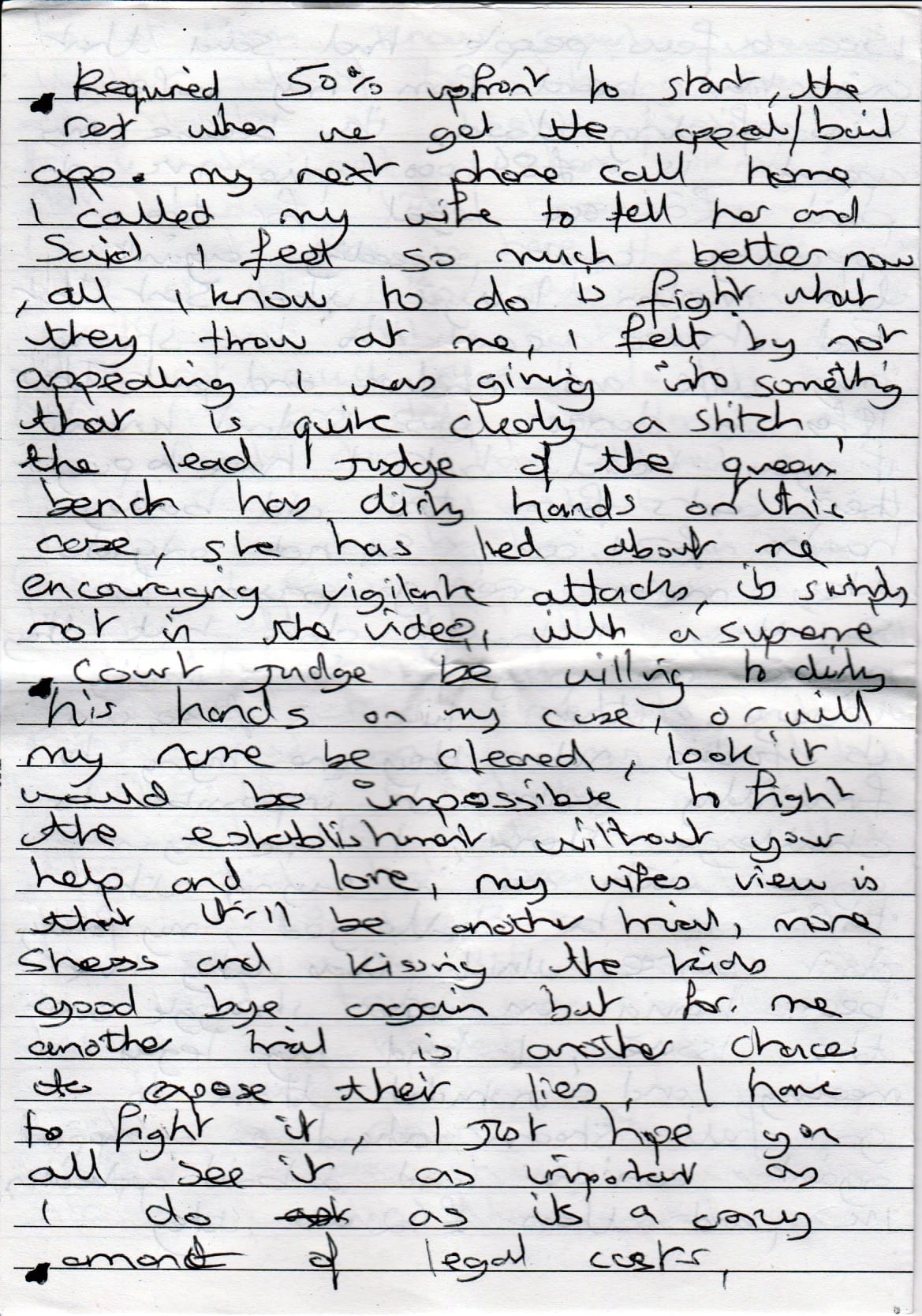 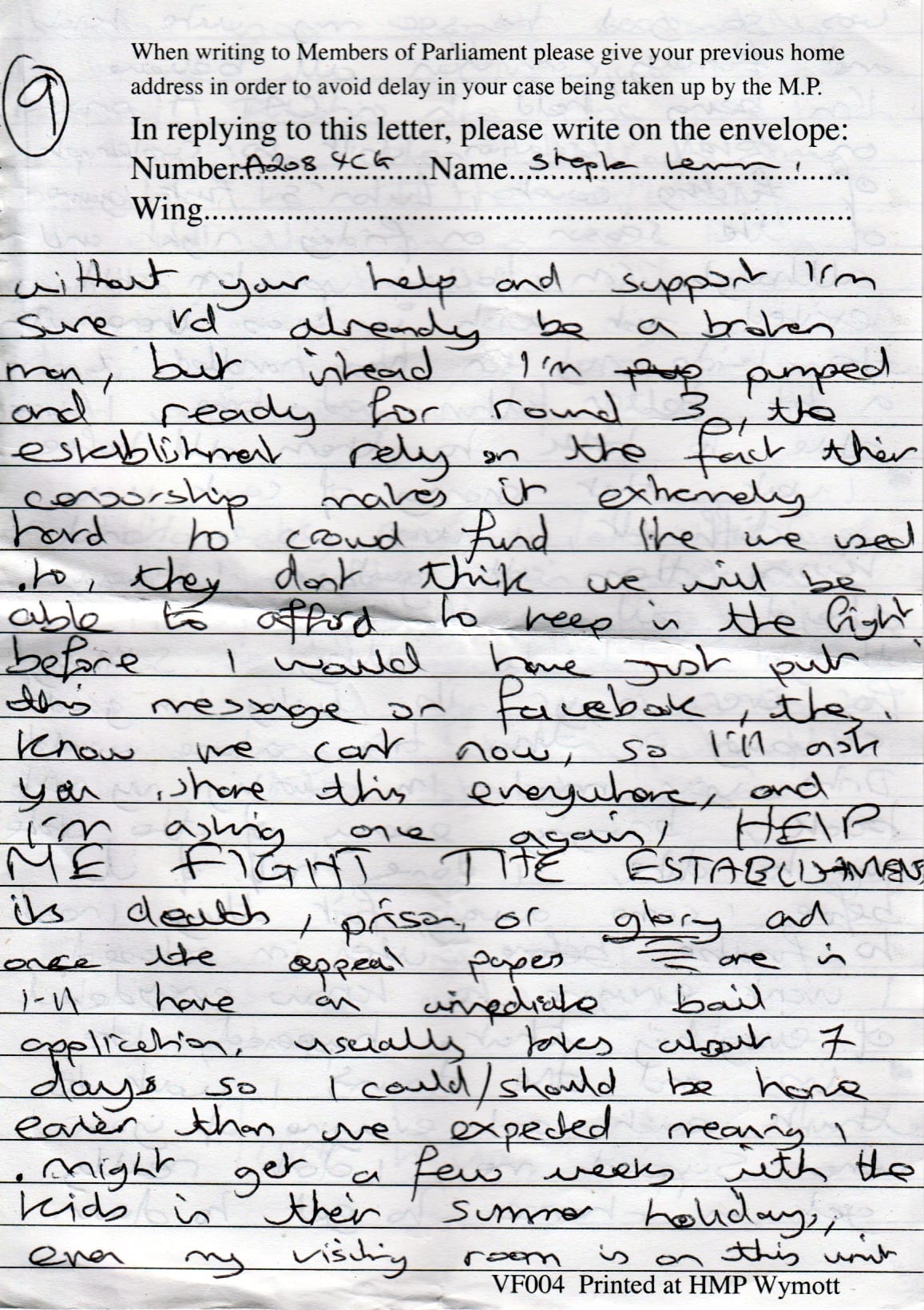 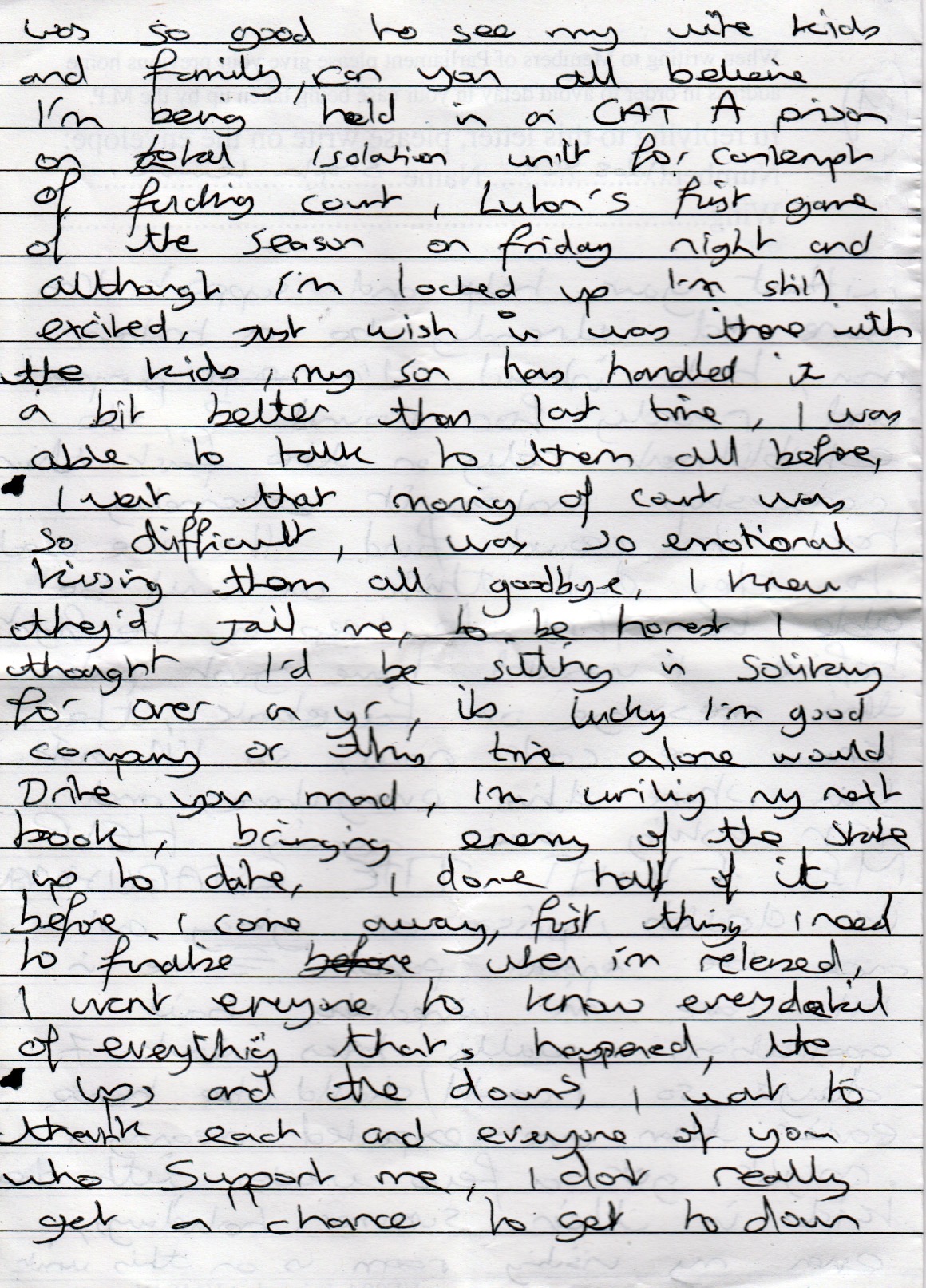 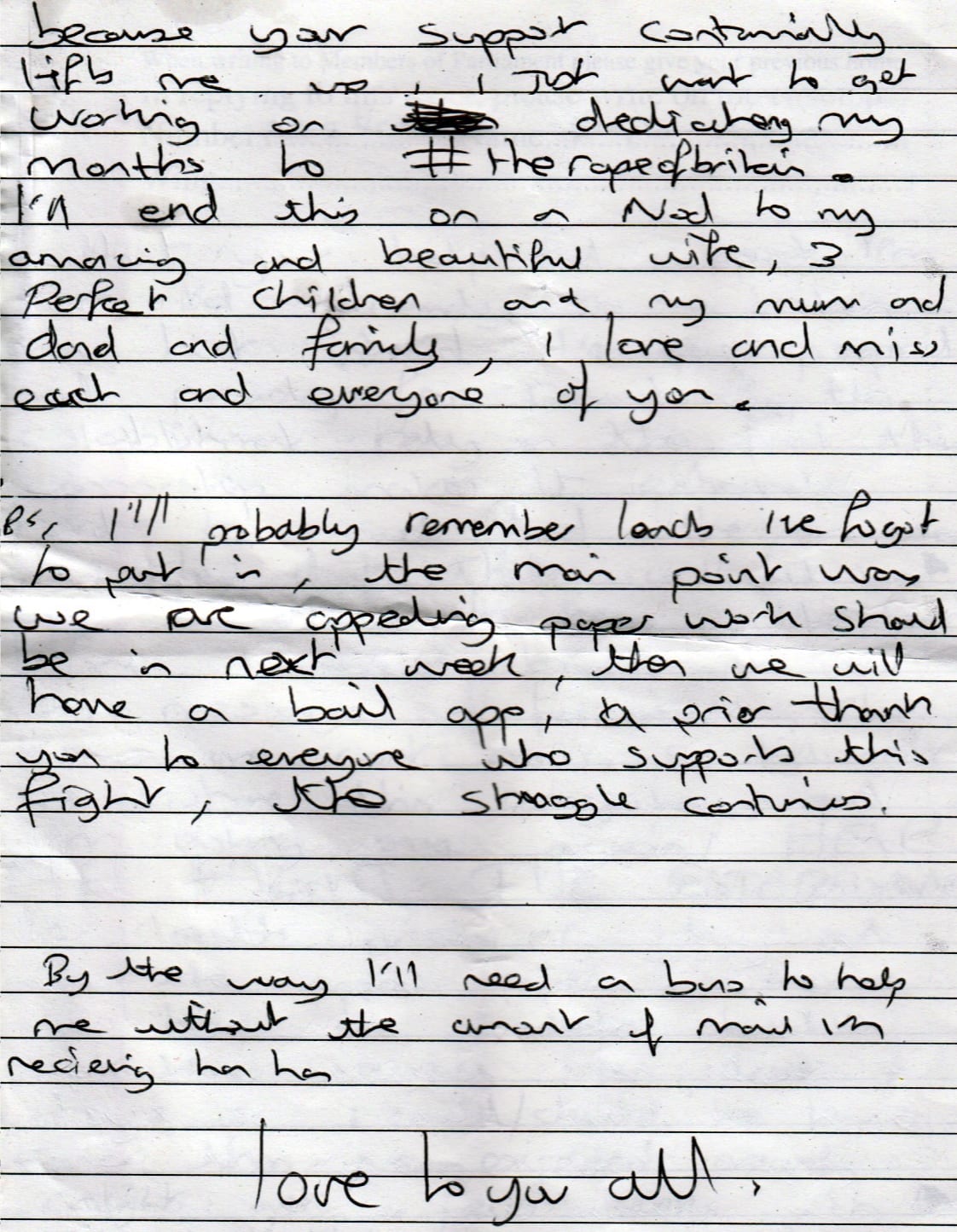 Within The Last 100 Hours 5 Major Events Have Happened

Big Stories Happening RIGHT NOW That Nobody is Talking About

Tommy Robinson Writes Letter From Solitary Confinement: “The Judge Convicted A Journalist That Had Zero Impact On The Trial”