Home»US»Trump’s DOJ To Judge: Stop ISIS Bride Hoda Muthana’s Return To US
US

Hoda Muthana, bride of ISIS terrorists, claims birthright citizenship and a right to return to the United States. But her lawsuit should be dismissed, according to U.S. President Donald Trump. The issue – whether the lawsuit continues – will be decided by the Hon. Reggie B. Walton, District Court Judge. At risk is Islamic terrorism being imported and the safety of Americans.

This federal lawsuit’s chronology, and Hoda Muthana’s support of terrorism, are provided courtesy of the Geller Report.

“The Fourteenth Amendment to the U.S. Constitution confers citizenship on persons ‘born or naturalized in the United States, and subject to the jurisdiction thereof.’ U.S. Const. amend. XIV, § 1; see also 8 U.S.C. § 1401(a). The Supreme Court has long held that the phrase ‘subject to the jurisdiction thereof’ excludes from the coverage of the Fourteenth Amendment’s citizenship clause children born in the United States to foreign ministers or diplomatic officers representing foreign nations.” Motion, p. 17.

Hoda Muthana “is not and never was a U.S. citizen. Muthana’s parents enjoyed diplomatic-agent-level immunity at that time of her birth, meaning that she was born not subject to the jurisdiction of the United States and thus could not and did not acquire U.S. citizenship at birth. And because A.M.’s only claim to citizenship rests on his mother (Muthana) being a U.S. citizen, the claims related to A.M. must also be dismissed.” Motion, p. 16.

“Plaintiff cites no authority – and Defendants have found none – that supports Plaintiff’s assertion that the United States must facilitate the return of its citizens. There is no unqualified right to government assistance for a U.S. citizen to return to the United States.” Motion, p. 37.

“This Circuit has in fact specifically clarified that the government cannot make an “end run” around the requirement of obtaining a judicial ruling, supported by clear and convincing evidence, in order to revoke citizenship.” Response, p. 17.

“As there has been no judicial order to the contrary …, the citizenship evidenced by Ms. Muthana’s previous passports remains in existence. Ms. Muthana is, therefore, entitled to a declaratory action from this Court that she remains a United States citizen.” Response, p. 18.

Immigration and citizenship are premised on a lawful application; shared belief of culture and values; merit of contribution; and self-sufficiency without a burden on taxpayers. The foregoing has been policy – borders, language, and culture – of the United States for about two hundred years. But since the 1960s, the mostly Democratic-controlled Congress has changed the policy from merit to familial, or chain, migration: Importing unvetted refugees, particularly from radical Islamic-controlled countries; a Visa lottery; and financial and health benefits bestowed on non-citizens. The Democrats’ policy of open borders has a consequence of making it easier for terrorists to enter the United States.

The United States, a sovereign nation, has authority to establish eligibility for immigrants. President Trump has tried to reduce the number of refugees, and he supports the proposed RAISE Act. An applicant must understand and swear to uphold the United States’ Constitution including the Bill of Rights; accept individual liberties; and respectfully disagree without violence on issues such as politics and religion. Refuse to accept these principles, then the government must reject an application for citizenship, visa, or refugee status.

The above is antithetical with Hoda Muthana’s support of Islam’s core doctrine: Under Sharia law, the Kafir (unbeliever) has only three options: (a) Convert to Islam; (b) Become a second-class citizen, and pay Jizya, a tax; or (c) Die. As a devout Muslim, Hoda Muthana must agree with Islamic subjugation of women, female genital mutilation, and honor killings; She cannot deny the Muslim Brotherhood (HAMAS-CAIR)’s Strategic Memorandum to designate Islam as the official religion and impose Sharia law in the United States. In the MB’s Memorandum:

“The process of settlement is a ‘Civilization-Jihadist Process’ with all the word means. The Ikhwan [Muslim Brotherhood] must understand that their work in America is a kind of grand jihad in eliminating and destroying the Western civilization from within and ‘sabotaging’ its miserable house by their hands and the hands of the believers…” Memo, p. 7.

“Islam isn’t in America to be equal to any other faith but to become dominant. The Quran should be the highest authority in America.” – CAIR founding chairman Omar Ahmad, quoted in the Muslim Mafia. The United Arab Emirates named the Council for American Islamic Relations as a terrorist organization along with al-Qaeda and ISIS in 2014.

As reported by the Middle East Media Research Institute, Hoda Muthana will bring her brand of terrorism to the United States: 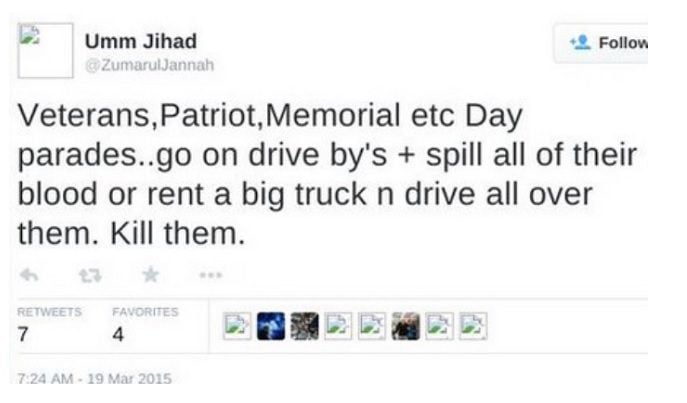 Hoda Muthana supported ISIS’ pursuit of a Caliphate. Muthana was aware of the brutal violence and murder of the unbelieving Kufar. Only due to ISIS’ failure to establish a Caliphate, does Muthana want to return to the United States.

This is a power play between the Courts, Congress and the U.S. President, whose first priority is security of citizens. The government’s policy should be to deny citizenship to, or a right of return by, anyone who provides material support to a terrorist organization.

The federal judge should grant the USA’s Motion to Dismiss / Partial Summary Judgment.

If Hoda Muthana does return to the United States, then, after due process and if convicted for support of terrorism, she should be sentenced to life and held at Gitmo.

“Enhanced Interrogation” Has Destroyed the Mind of Julian Assange

While US Farms Deal With Natural Disasters, Trump Slapped Tariffs On Countries From Which We Import The Rest Of Our Food