I have to say that I’m not surprised.  Steve Bannon, a self-professed “Christian Zionist,” which is completely unbiblical, along with three others, including triple amputee veteran Brian Kolfage, has been indicted for illegally funneling money that was obtained from hard-working Americans via the “We Build The Wall” fund.

Former White House adviser Steve Bannon was arrested Thursday on charges that he and three others ripped off donors to an online fundraising scheme “We Build The Wall.”

The charges were contained in an indictment unsealed in Manhattan federal court.

Federal prosecutors alleged that Bannon and three others “orchestrated a scheme to defraud hundreds of thousands of donors” in connection with an online crowdfunding campaign that raised more than $25 million to build a wall along the southern border of the United States.

According to the indictment, Bannon promised that 100% of the donated money would be used for the project, but the defendants collectively used hundreds of thousands of dollars in a manner inconsistent with the organization’s public representations.

The indictment said they faked invoices and sham “vendor” arrangements, among other ways, to hide what was really happening.

The four men are indicted for allegedly taking hundreds of thousands of dollars donated to a group called We Build the Wall and using the funds for personal expenses, among other things.

According to prosecutors, Bannon, through a non-profit identified as Non-Profit-1, used more than $1 million from We Build the Wall to “secretly” pay another defendant, Brian Kolfage, and cover hundreds of thousands of dollars in Bannon’s personal expenses.

“As alleged, the defendants defrauded hundreds of thousands of donors, capitalizing on their interest in funding a border wall to raise millions of dollars, under the false pretense that all of that money would be spent on construction,” Acting Manhattan US Attorney Audrey Strauss said in a statement. “While repeatedly assuring donors that Brian Kolfage, the founder and public face of We Build the Wall, would not be paid a cent, the defendants secretly schemed to pass hundreds of thousands of dollars to Kolfage, which he used to fund his lavish lifestyle.”

As soon as the “We Build The Wall” fund grew over $2 million, I told close friends to watch that it would not fulfill what it claimed and would eventually be turned into a corporation and something dirty would happen.  Sure enough, it has come to pass.

In fact, We Build The Wall is selling portions of the wall to people to put their names on in order to appeal to people’s vanity to gain more money.

At least $25,000,000 was raised according to the site.  It appears from what I could gather than only 4-5 miles of wall has actually been erected in the time since the first project took place in Sunland Park, New Mexico on June 3, 2019.

As you can see, the site promotes that your donations have a direct impact.  They do, right into the pockets of Bannon, Kolfage and company, according to the indictments. 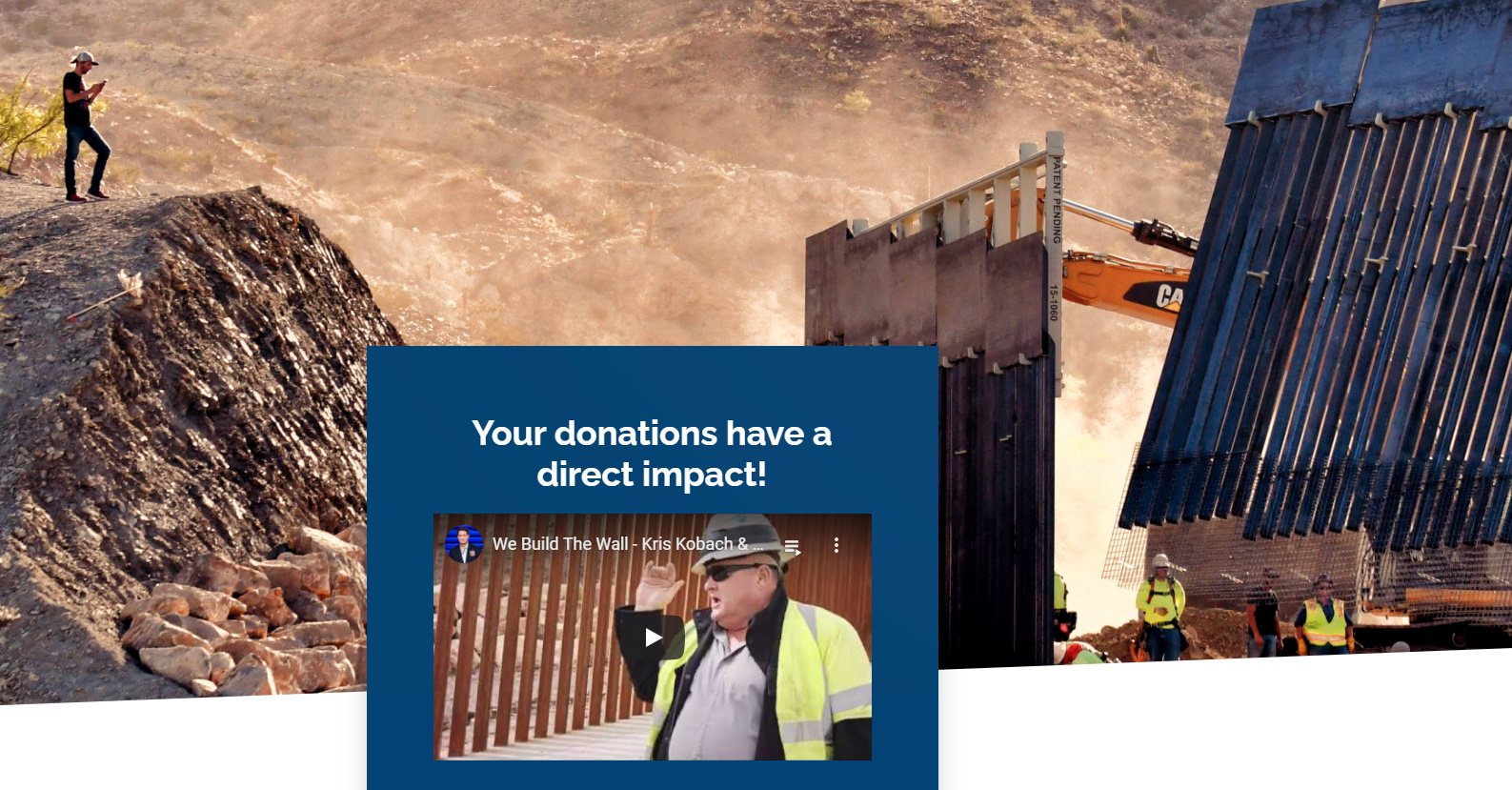 Additionally, both President Trump and his son have endorsed We Build The Wall.

It’s true, it did start among the people.  It’s really a shame that the people’s trust was betrayed in all of this.

Kolfage wrote on the We Build The Wall website.

My name is Brian Kolfage, I’m a triple-amputee war veteran and founder of We Build The Wall which was born from the viral GoFundme that raised millions of dollars for the wall. I take the security of the American people very seriously which is how I find myself building wall on the southern border. If you are sick and tired of watching politicians in both parties obstructing President Trump’s plan to build a wall on our southern border, then you’ve come to the right place. We The People are coming together to build segments of Border wall on private property, in order to supplement President Trump’s plan and to maximize security on our southern border.

As a veteran who has given so much, 3 limbs, I feel deeply invested to this nation to ensure future generations have everything we have today. Too many Americans have been murdered by illegal aliens and too many illegals are taking advantage of the United States taxpayers with no means of ever contributing to our society. I have grandparents who immigrated to America legally, they did it the correct way and it’s time we uphold our laws, as we are a nation of laws first and foremost. It’s up to Americans to help out and pitch in to get this project rolling. If the 63 million people who voted for Trump each pledge $80, we can build more than half of the entire wall privately.

It’s not looking like this was all about country, is it?

Are Americans Finally Getting Off Their Knees? "Our Families Are Starving!"