In another act of Jew hatred and anti-Israel bias, Twitter has stopped translating Hebrew tweets.

Many Twitter users began to notice Twitter’s abrupt decision to stop translating Hebrew tweets when they visited Israeli Prime Minister Benjamin Netanyahu’s account to read his tweets following Israel’s attack on Syria and his announcement that he’d be traveling to Brazil for the inauguration of pro-Israel Brazilian President elect Jair Bolsonaro, who vowed to move Brazil’s embassy in Israel to Jerusalem.

In the past, all tweets in Hebrew (and other languages) were featured, followed by English text that gave twitter users the option to “translate tweet”.

Now, when users visit profiles that post in Hebrew, the Hebrew language is no longer translated.

How are Twitter users who don’t speak Hebrew supposed to keep up with Israeli politics and developments in the Middle east pertaining to Israel and the Jewish people?

Twitter doesn’t seem to care, as their decision to stop translating Hebrew tweets came with no explanation, and appears to have been casually implemented without an announcement this week. Jewish, Israeli, and Hebrew speaking Twitter users were not informed of Twitter’s decision to stop translating Hebrew, which has effectively cut off all Israeli twitter users and Hebrew speakers from the non Hebrew twitter sphere. 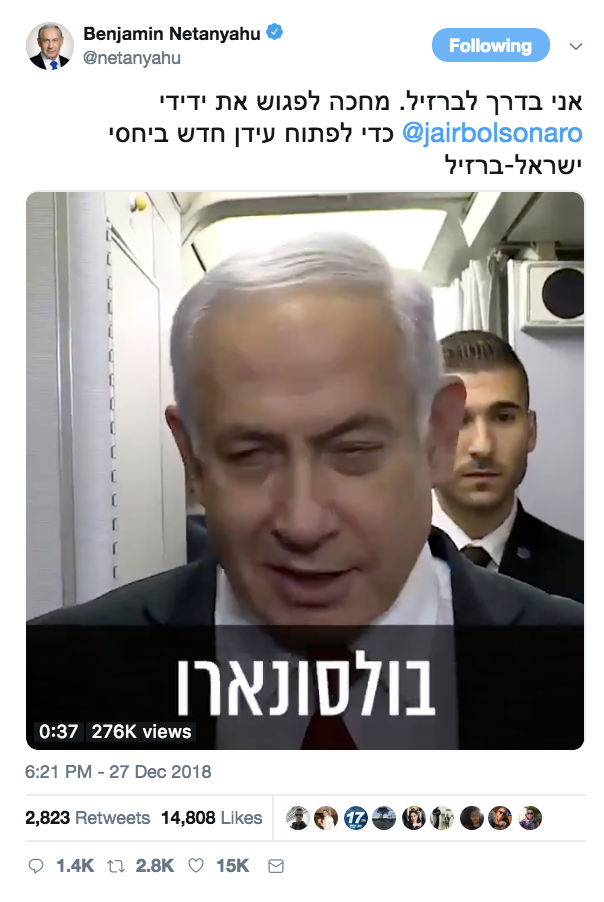 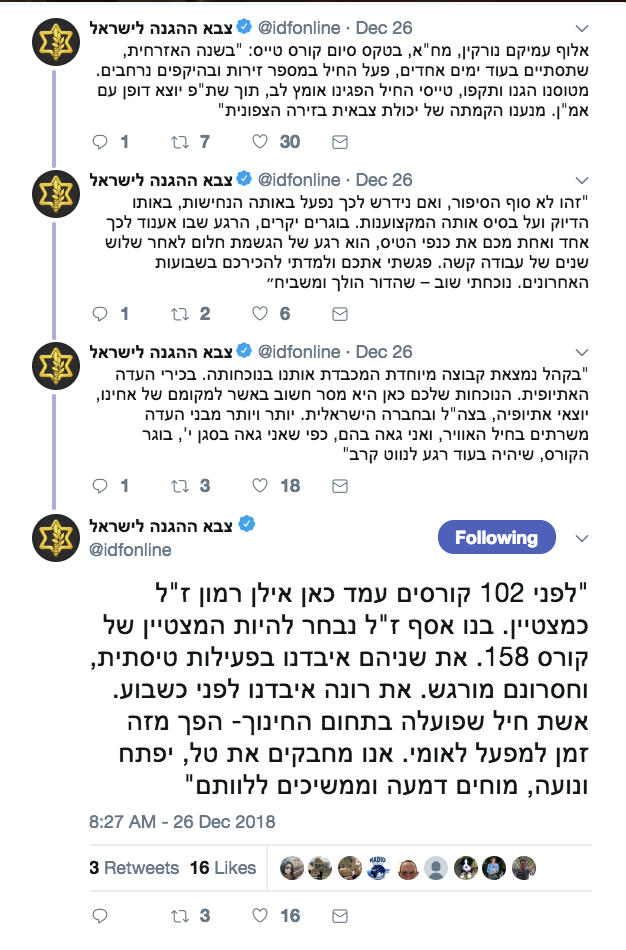 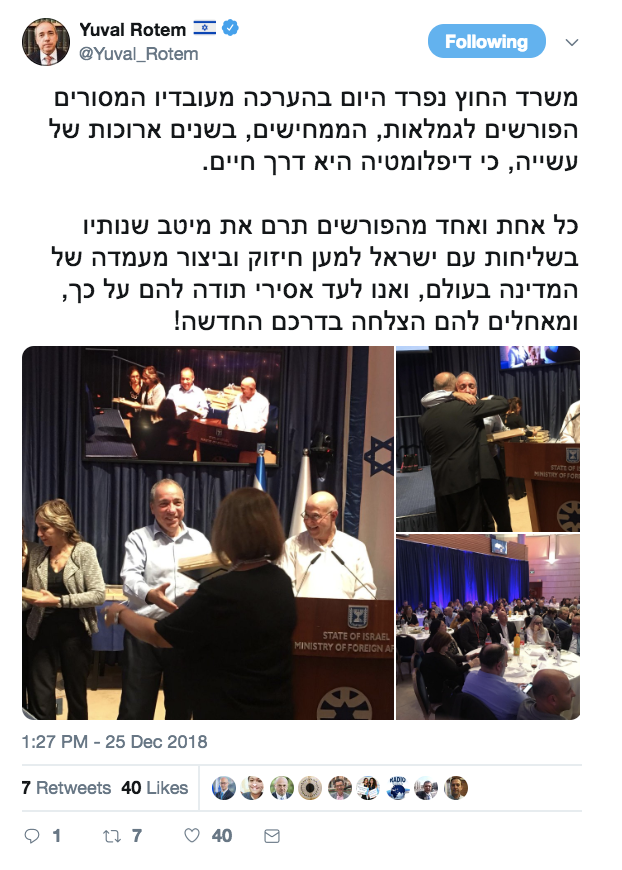 Examples: Hebrew tweets from Israeli Prime Minister Benjamin Netanyahu, the Israeli Defense Forces (IDF), and Yuval Rotem, Director General of the Ministry of Foreign Affairs of Israel are no longer being translated on Twitter.

In case you were wondering, Twitter is still translating Arabic tweets. You will no longer be able to translate the Hebrew tweets from Israel’s Prime Minister or the IDF, but at least you’ll be able to translate tweets posted by Palestinian terrorists in Hamas about how it’s a form of betrayal to normalize judaism and zionism!

Twitter’s decision to essentially erase Jews and Israeli’s from Twitter by cutting off the translate option is an act of anti-jewish aggression against the Jewish people and their homeland. By refusing to recognize Hebrew as a language that ought to be translated on one of the world’s largest social media platforms, Twitter is signaling that Israel and the Jewish people do not deserve to be heard.

It is yet another disturbing piece of evidence that supports recent claims that Twitter and Facebook are pro-Sharia social media networks that exhibit bias against Jews.

Put simply, Twitter is funded by Saudi Arabia and thus their terms of service policies are pro-Sharia and anti-First Amendment. This is why Twitter keeps banning conservatives, Jews, and Christians. It is worth noting that Prince Al-Waleed bin Talal owns more Twitter stock than Twitter CEO Jack Dorsey. The Saudi billionaire doubled his stake in Twitter in 2015.

In fact, banning people with Israeli passports and Israeli stamps in their passport from visiting Saudi Arabia is a long-standing  practice in Saudi Arabia, as well as many other Muslim majority countries that have implemented Sharia law.

On November 21, I was permanently banned by twitter as a Jewish Conservative journalist after posting a tweet critical of Congresswoman elect Ilhan Omar, who is anti-Jewish. My tweet was not hateful, and it didn’t violate the Twitter terms of service, but Twitter deemed my pro-Jewish tweet condemning Jew hatred to be a form of “hate speech”, and as a result, my account of nearly 265,000 followers was banned, forever. 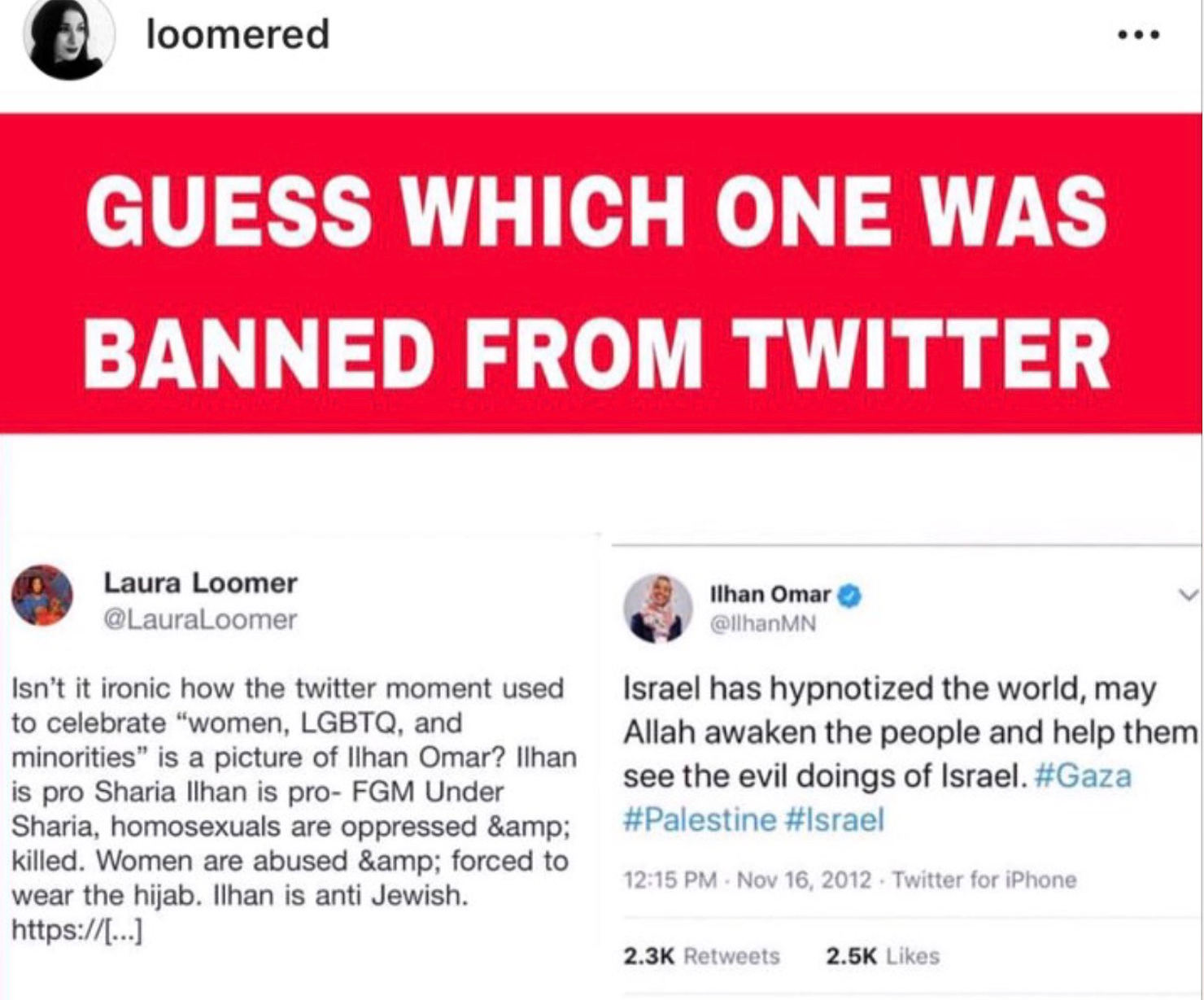 In response to my Twitter ban and Silicon Valley Sharia, I handcuffed myself to Twitter HQ in NYC on November 29, 2018. While handcuffed, I wore a yellow Juden star, identical to those worn by Jews in the time leading up to the Holocaust. Just like the Nazis made lists of political dissidents who they marked and banned with yellow stars, Twitter, Facebook, and Google are modern day techno-fascists in the way they are silencing Conservatives, Jews, and Christians who dare speak truth about Islam, terrorism, and Jew hatred.

During my protest, while I held a sign that read “Jew hatred, A-Ok! Nosey Jew? BANNED” at Twitter, I said, 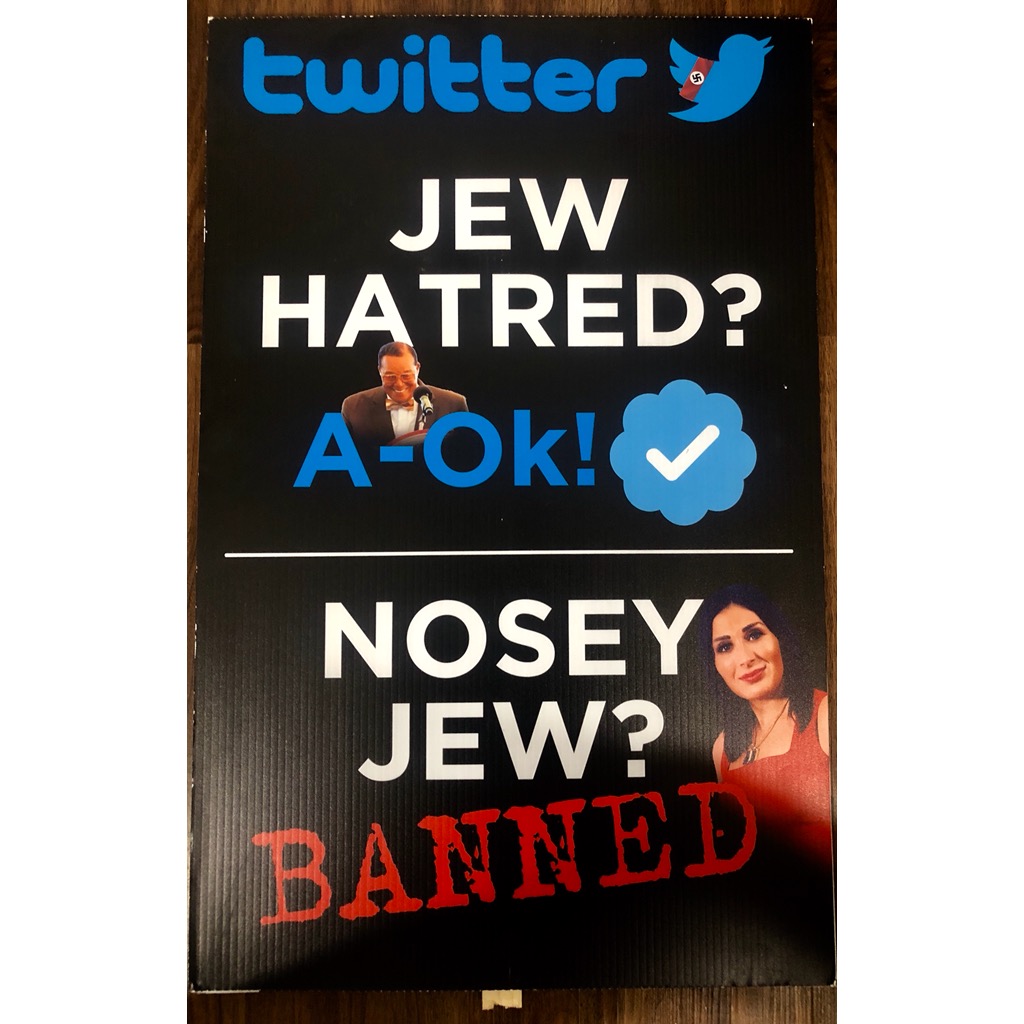 I am not the only prominent pro-Israel Jewish journalist to be silenced by big tech. Other Jews who have been silenced by Twitter and Facebook include Pamella Geller, Robert Spencer, and Avi Yemini. However,  rabid Jew-hating Muslim activist Linda Sarsour who has used her Twitter to attack Jews and promote Sharia is still active and verified on both platforms. Yes, the woman who has praised HAMAS, argued that “Jews should not be humanized,” and whose mentor, Siraj Wahhaj, is a co-conspirator in the 1993 World Trade Center bombing has not been silenced.

It is worth noting that Sarsour has never once been suspended for her actual hateful comments against Jews and Israel. Neither has her mentor Siraj Wahhaj. He is still allowed on Twitter. And yes, so is her other mentor, Louis Farrakhan, the leader of the Nation of Islam who recently tweeted, “I’m not an anti-Semite. I’m anti-termite”. 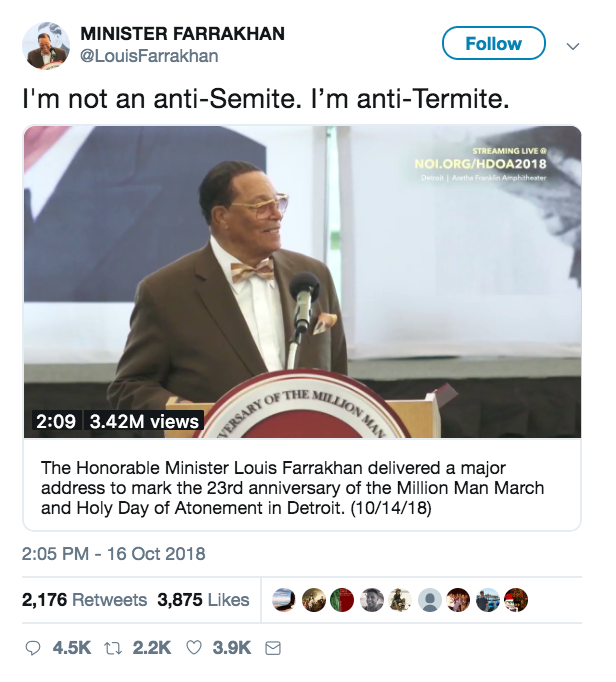 Twitter even went as far as releasing a statement saying Farrakhan’s anti-Jewish tweet in which he called Jews termites and signaled for them to be exterminated like termites was *not* a violation of their terms of service.

Earlier this month, Facebook banned Yair Netanyahu, the son of Israeli Prime Minister Benjamin Netanyahu for a post critical of Islamic terrorists. Yair’s post, which was in response to the death of the two IDF soldiers killed by Palestinian terrorists in Givat Assaf, was removed by Facebook, and he was issued a 24 hour ban on his account.

Facebook deleted Yair’s post in which he said he’d “prefer” if “All the Muslims leave the land of Israel.”

How is it that a Jewish Conservative journalist and the Israeli Prime Minister’s son get banned on social media for posting facts about Islam, but Hamas, Hezbollah, the Muslim Brotherhood, Louis Farrakhan, and Iranian dictators who chant “death to Israel” and “death to America” and have all expressed hatred of Jews have verified Facebook and Twitter accounts?

Through their pro-Sharia terms of service, Facebook and Twitter are clearly signaling that it’s ok to be a terrorist, but not ok to be Conservative, Jewish, Christian, or pro-Israel.

In July 2018, Mark Zuckerberg sparked outrage when he said he didn’t see a reason to ban Holocaust deniers on Facebook. Meanwhile, he finds it very necessary to ban Conservatives and Jews.

In October 2018, Twitter released a statement saying it was not a violation of their terms of service when Louis Farrakhan, the leader of the Nation of Islam, called Jews termites. Twitter said they would not ban Farrakhan, even though he has called for Jews to be eradicated and publicly proclaimed “Hitler was a great man”.

In November 2018, Twitter was forced to apologize after they allowed for #KillAllJews to trend for several hours.

In November 2018, Airbnb withdrew listings of Israeli homes in Judea and Samaria, in an attempt to side with the Palestinians and BDS movement.

You get the point.

Why does Twitter find it unnecessary to translate the language of the Jewish people and the tweets of the Israeli Prime Minister while they actively  translate the tweets of a terrorist organization that states in its own charter that killing Jews and destroying Israel is their mission?

Hamas has been classified as a designated terrorist organization by the U.S. State Department and is listed as a co-conspirator in the Holy Land Foundation HAMAS terror funding trial in 2008, which is the largest terrorism financing case in U.S. history. In the Covenant of Hamas, which outlines the goals and motive of Hamas and its members, it states that one of its main goals in the destruction of Israel.

“Israel will exist and will continue to exist until Islam will obliterate it, just as it obliterated others before it.”

Twitter, which is an American company, did not respond to a request for comment regarding the reason why they no longer translate Hebrew tweets and why they are giving a platform to Islamic terrorist organizations like HAMAS.

Fauci & Other Criminals In Panic Mode Over Rise Of Anti-“Vaxx”ers – Good, We Should Be Resisting Their Dangerous Religion

Rough Time Ahead, But Liberty Can Still Win