Home»US»Vaccine Update: The Military Has A Heavy-Handed Involvement In Operation Warp Speed
US

Vaccine Update: The Military Has A Heavy-Handed Involvement In Operation Warp Speed

A new chart has shown just how heavy-handed the military’s involvement is in the rollout of a coronavirus vaccine under Operation Warp Speed.  The Trump administration has put the military in charge of the vaccine’s distribution, and President Donald Trump says it will be done in a “powerful way”.

When President Trump unveiled Operation Warp Speed in May, he declared that it was “unlike anything our country has seen since the Manhattan Project.”

The initiative — to accelerate the development of Covid-19 vaccines and therapeutics — lacks the scale, and the degree of secrecy, of the effort to build the atomic bomb. But Operation Warp Speed is largely an abstraction in Washington, with little known about who works there other than its top leaders, or how it operates. Even pharmaceutical companies hoping to offer help or partnerships have labored to figure out who to contact.

An organizational chart of the $10 billion initiative, obtained by STAT, reveals the fullest picture yet of Operation Warp Speed: a highly structured organization in which military personnel vastly outnumber civilian scientists. –Stat News

If you are curious just how much involvement and force and coercion will be used, look no further than the chart below: 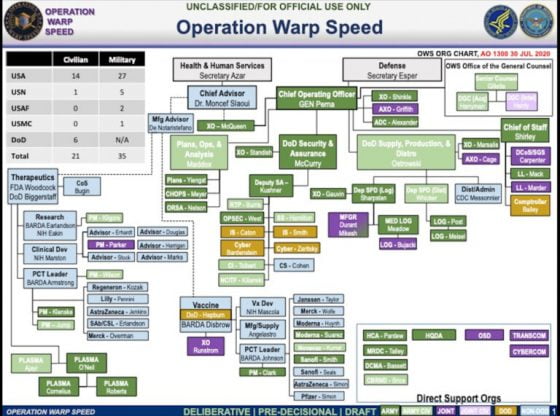 One senior federal health official told STAT News that he was struck by the presence of soldiers in military uniforms walking around the health department’s headquarters in downtown Washington and said that recently he has seen more than 100 officials in the corridors wearing “Desert Storm fatigues.” The United States military has historically been used for one thing: war. This is a war on us. The amount of military involvement in this vaccine should open everyone’s eyes to the gravity of the situation we have found ourselves in.

“Military personnel won’t be familiar with the health resources available in a community,” said John Auerbach, CEO of Trust for America’s Health, a group closely aligned with public health departments. “They don’t know who the doctors are or where the community health centers are located or what resources they have. They don’t know where the pharmacies are. Public health people do know, that’s part of what they do.”

Beyond obtaining the internal document from a federal official, STAT interviewed companies funded by Warp Speed. They found that more than a dozen key officials who have worked closely with the organization’s leaders. The reporting sheds light on the high degree of organization and specialization within the organization, as well as the extreme demands the initiative is placing on the companies it funds.

Operation Warp Speed’s central goal is to develop, produce, and distribute 300 million doses of a coronavirus vaccine by January. That’s almost everyone in the United States.

If you are still in some way deluded about whether or not they intend to vaccinate everyone (mandatory or not), I suggest you open your eyes and face reality. You cannot be adequately prepared if you continue to stick your head in the sand and ignore the obvious. It’s time to realize what’s happening so you can make preparations if you intend to say ‘no’ to this vaccine.

Presidential "I Know You Are But What Am I?" Debates & COVID Stimulus Spending

Vaccine Update: The Military Has A Heavy-Handed Involvement In Operation Warp Speed