YouTube is not a group of doctors, nurses, or have any sense of medical education, but their Nazi CEO claims that they will not tolerate and they will remove any videos that present a different, lawful narrative against the current one they are presenting.  Former CBS journalist Sharyl Attkisson has come under their attack just as The Sons of Liberty have in attempting to investigate certain claims about COVID-19, 5G, coronavirus and drugs used as treatment, including hydroxychloroquine and chlorine dioxide.

Attkisson’s video, which has been reinstated, was pulled by YouTube because it featured doctors that discussed the media’s politicization of hydroxychloroquine, which is being promoted by the Trump administration with big profits ahead for Big Pharma is the people buy it hook, line and sinker.

Sharyl: Camps largely divided along political lines. Many right-leaning media figures sided with hydroxychloroquine while the left-leaning press backed remdesivir. Each accusing the other of ignoring real science.

“We’re hearing now from some participants that the study and the drugs feel too political, and they just don’t want to participate at all,” said Christine Johnston, a researcher at the University of Washington.

While researching the financial ties of several government experts in charge of drafting treatment guidelines for the virus, Attkisson found that nine of them had ties to Gilead, the manufacturer of remdesivir. Another 11 were reportedly linked to a drug company and seven, including two committee leaders had direct ties to Gilead, and two were even on Gilead’s advisory board.

Sharyl: All three scientists criticized that VA report casting doubt on hydroxychloroquine as little more than a list of cases with crucial details missing. It turns out one author of the report received research funding from Gilead, the maker of remdesivir, including a 247-thousand dollar grant in 2018.

Orient: I think we have to look at the money. There’s no big profits made in hydroxychloroquine. It’s very cheap, easy to manufacture, been around for 70 years. It’s generic. Remdesivir is a new drug that could be very expensive and very lucrative if it’s ever approved. So, I think we really do have to consider there’s some financial interest involved here. [SOURCE]

YouTube has been notorious lately for censoring content which goes against the official stance of the World Health Organization (WHO) or other governmental authorities on the pandemic. Not only have famous interviews with David Icke been removed, followed by a subsequent ban from the platform, but an NBC press briefing with California doctors was taken down after receiving over 5 million views, and the film Plandemic featuring Dr. Judy Mikovits has been severely targeted.

Facebook has also been cracking down on coronavirus related content, as Sharyl highlights in an April Facebook post. Upon sharing a documentary from The Epoch Times, Facebook ‘fact-checkers’ claimed that Attkisson posted false content about the origin of the coronavirus, but the article used to ‘debunk’ her was written before the documentary had even aired.

Attkisson rightly pointed out, “When self-appointed fact-checkers intervene to try to stop people from accessing certain information, or to bully and controversialize those who report and read facts that are off the narrative powerful interests are trying to forward, it should be concerning to all.”

I couldn’t agree more.  In fact, that is what a free society allows.

With that in mind, I don’t think I’ve heard many people speak about the dangerous side effects of hydroxychloroqine.

While it has been used to treat malaria, there are also a number of side effects that can accompany the use of the drug.

These screenshots were provided by The Sons of Liberty’s health and wellness expert Kate Shemirani from Drug.com. 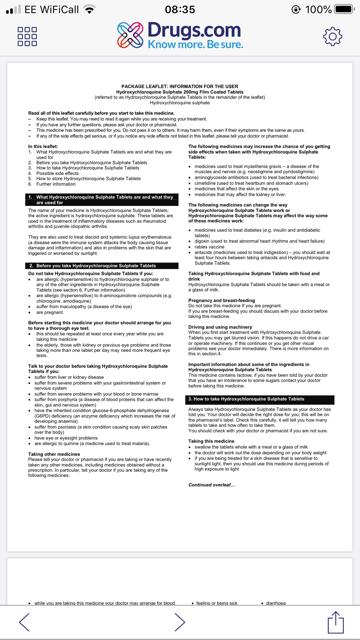 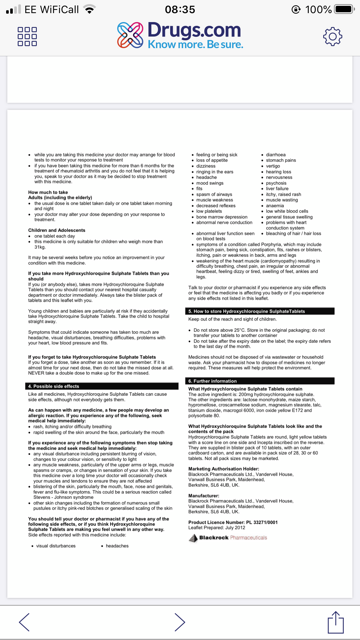 Additionally, WebMD lists the side effects as follows:

Nausea, vomiting, loss of appetite, diarrhea, dizziness, or headache may occur. If any of these effects last or get worse, tell your doctor or pharmacist promptly.

Tell your doctor right away if you have any serious side effects, including: slow heartbeat, symptoms of heart failure (such as shortness of breath, swelling ankles/feet, unusual tiredness, unusual/sudden weight gain), mental/mood changes (such as anxiety, depression, rare thoughts of suicide, hallucinations), hearing changes (such as ringing in the ears, hearing loss), easy bruising/bleeding, signs of infection (such as sore throat that doesn’t go away, fever), signs of liver disease (such as severe stomach/abdominal pain, yellowing eyes/skin, dark urine), muscle weakness, unwanted/uncontrolled movements (including tongue/face twitching), hair loss, hair/skin color changes.

This medication may cause low blood sugar (hypoglycemia). Tell your doctor right away if you develop symptoms of low blood sugar, such as sudden sweating, shaking, hunger, blurred vision, dizziness, or tingling hands/feet. If you have diabetes, be sure to check your blood sugars regularly. Your doctor may need to adjust your diabetes medication.

Get medical help right away if you have any very serious side effects, including: severe dizziness, fainting, fast/irregular heartbeat, seizures.

This medication may cause serious eye/vision problems. The risk for these side effects is increased with long-term use of this medication and with taking this medication in high doses. Get medical help right away if you have any symptoms of serious eye problems, including: sensitivity to light, vision changes (such as light flashes/streaks, blurred vision, difficulty reading, missing areas of vision).

We see that among the side effects there can be those that affect vital organs such as the heart and liver.

Now, I ask you, if our president, who is 74 years old has now confessed to taking hydroxychloroquine even though he has tested negative for coronavirus, does that not make you question why he is taking it?  It does me, especially, when Big Pharma stands to profit tens of billions of dollars from the sale of the prescription medication being promoted by the White House.

Yet, a simple natural compound, used in many cities drinking water to eliminate viruses and bacteria, as well as has been found to treat many children with autism, Chlorine Dioxide

, is not even mentioned.  Why?  Is it because there isn’t a lot of money for Big Pharma to make with it?

In my interview with Bill Evans with HealthForAllOfLife.com, he explained that malaria is being treated with chlorine dioxide

.  YouTube pulled the video, but the podcast is still available below.

In my interview with Kerri Rivera

, she claims to have treated children with autism with Chlorine Dioxide

While I’m no doctor nor a nurse, I have looked to those who are and to those who have experimented with this non-prescriptive compound which is both natural and doesn’t seem to produce side effects.  I present this as information and one is responsible for doing their own research, but considering that the media and politicians and even bureaucrats who claim to be doctors have lied to us.  I’d trust your judgment over theirs any day.

The English Constitutionalists Are Coming For The British (Video)

Stop Believing in Science: It's Not A Religion & Doesn’t Offer Virtue Or Certainty

Constitutional Scholar: "Trump Is Carrying Out The Globalist Agenda"