If you take in all of your information from mainstream media sources, you likely think that the Palestinians are a terrorist organization who carry out acts of unprovoked violence against the innocent state of Israel. But to those who think for themselves and seek out objective information on the Israeli and Palestinian relations, it is far more complex. It is also heavily one-sided.

It is no secret that the United States government is in bed with the Israeli government. In foreign “aid” alone, $10.5 million of your tax dollars flow to Israel every single day of the year. Some states have even passed laws that define the criticism of Israel as “anti-Semitism.”

Nevertheless, the US mainstream media has made it their mission to whitewash, downplay, distort, and completely lie about the crimes perpetuated on the Palestinian people by Israel.

Despite what the blowhards in the mainstream media say, the atrocities carried out by Israeli authorities amount to crimes against humanity of apartheid and persecution. In fact, Human Rights Watch released a report last month, saying exactly that.

“Prominent voices have warned for years that apartheid lurks just around the corner if the trajectory of Israel’s rule over Palestinians does not change,” said Kenneth Roth, executive director of Human Rights Watch. “This detailed study shows that Israeli authorities have already turned that corner and today are committing the crimes against humanity of apartheid and persecution.”

According to Human Rights Watch, the 1973 International Convention on the Suppression and Punishment of the Crime of Apartheid and the 1998 Rome Statute to the International Criminal Court (ICC) define apartheid as a crime against humanity consisting of three primary elements:

In the last week alone, all of these elements have been evident. But if you watch the Western media, however, you would think the Israeli government is the victim.

Alan MacLeod, a senior staff writer at Mint Press News compiled a few of the recent headlines pushed by the mainstream media that clearly illustrate not only a bias, but a campaign of lies and disinformation.

We picked five glaring examples to illustrate this point. One of the most insidious headlines was put out by the New York Post who flat out lied to their readers by replacing Israel with Hamas militants. 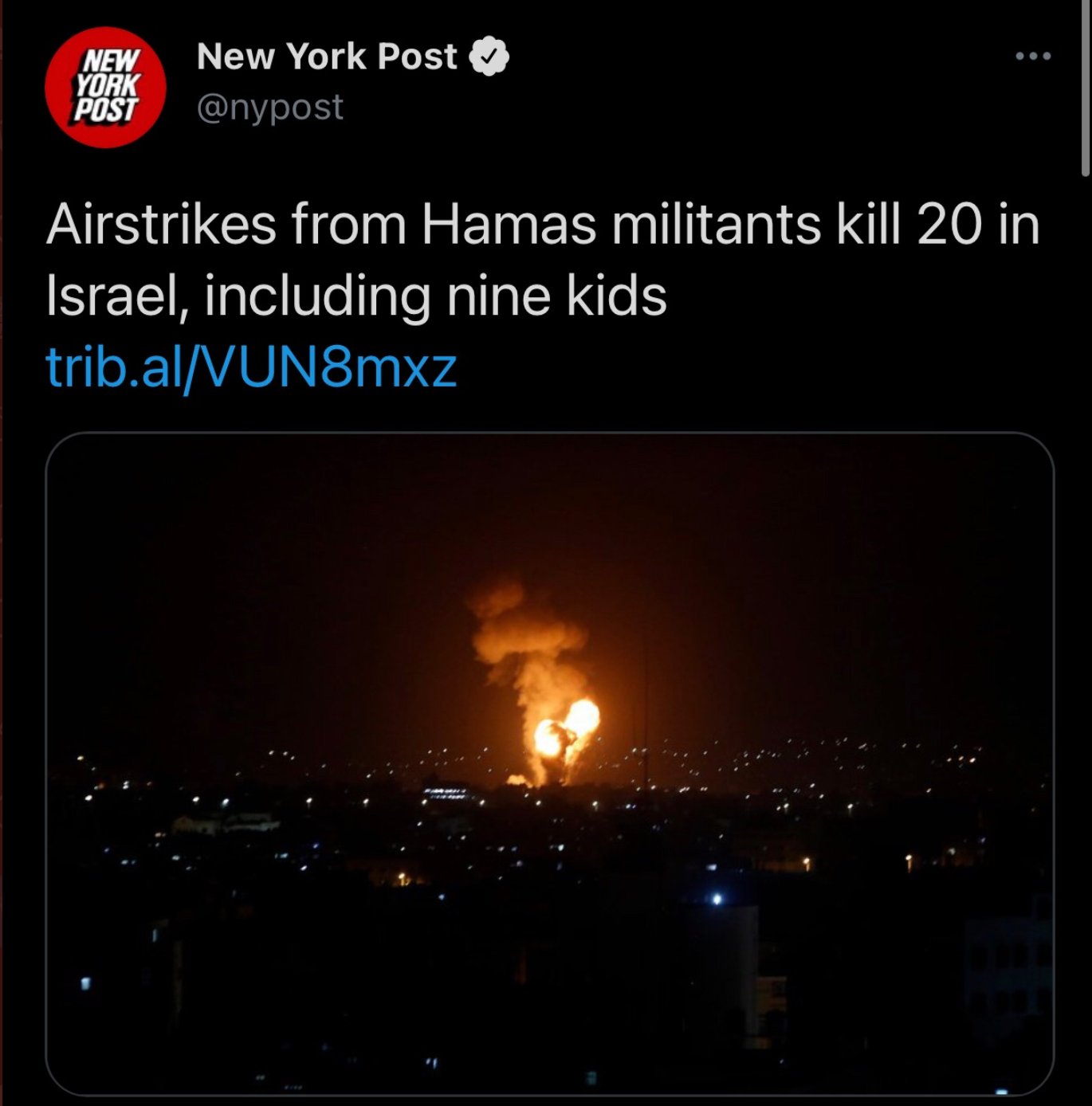 If you read the headline above, you would think that Hamas killed 20 Israelis and they also have planes with which to launch airstrikes. Neither are true. It was Israel who launched an airstrike in Gaza and it was Israel who killed 20 people, including nine innocent children.

Notice how the ostenisibly “objective Associate Press gets in on the action as well and spins the information to make Israel appear as the victim. As Macleod points out:

Also, kudos for leading with 2 Israeli deaths, which suggests they are more important & newsworthy than 26 Palestinians. 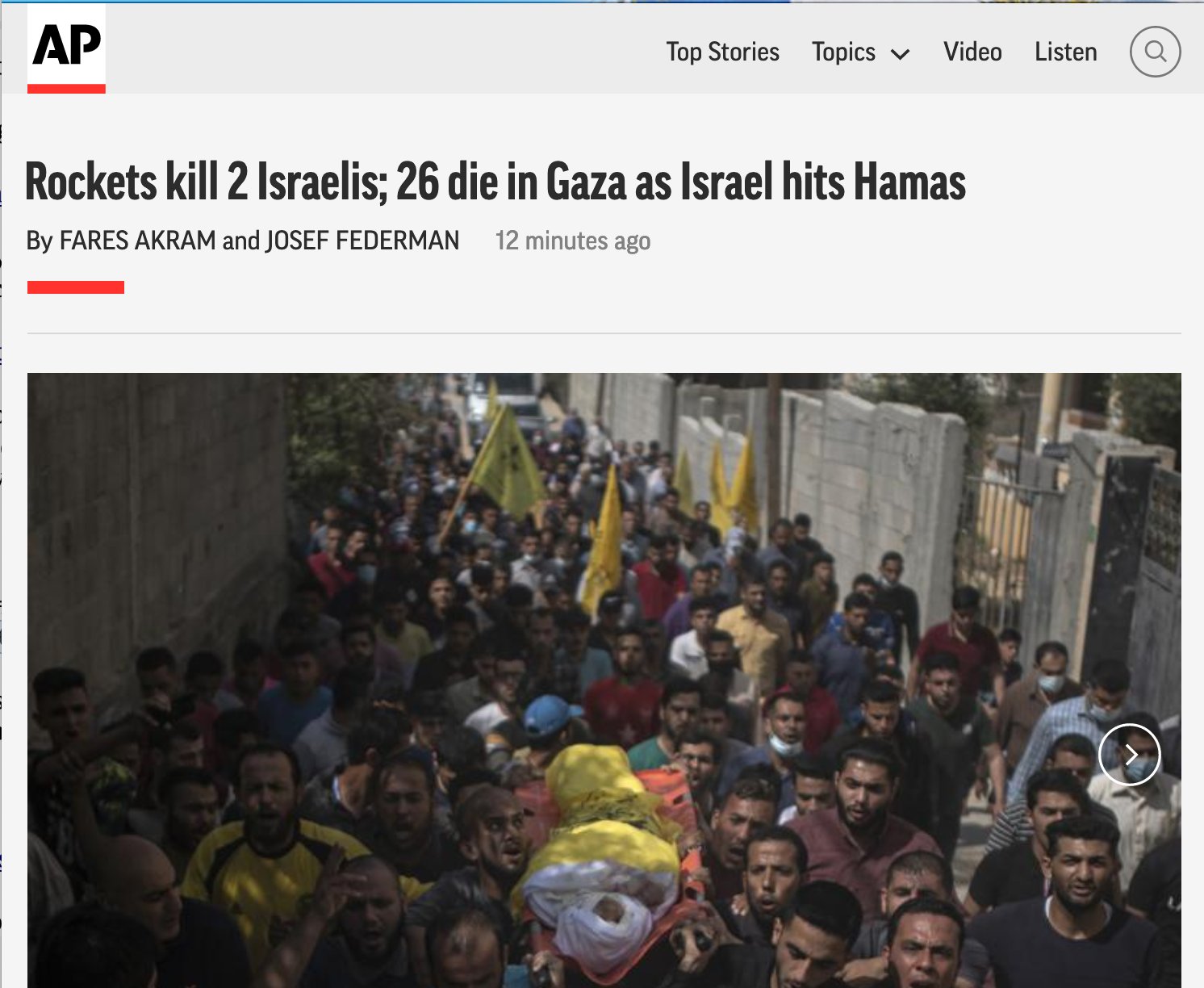 Reuters joined in on the whitewashing as well by spinning the current turmoil as if the Palestinian people aren’t being ethnically cleansed in an Israeli apartheid. A country with no military vehicles or planes cannot “trade blows” with the massive might of the IDF who is supported by the likes of Raytheon, Lockheed Martin, and Boeing. 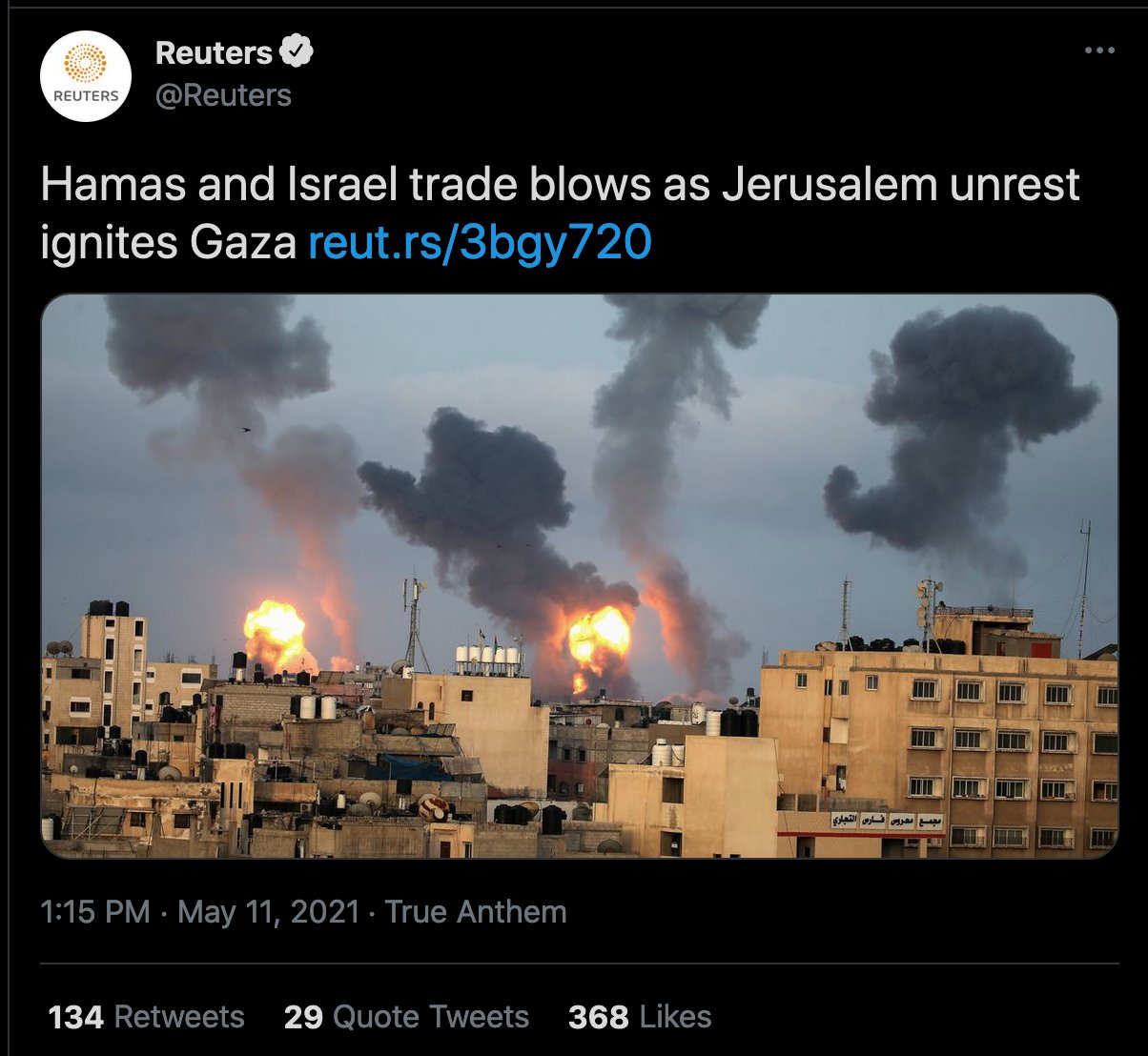 CBS propagandist Rucker Reals attempted to claim in a headline this week that “deaths are mounting on both sides.” But the rockets launched in an act of self-defense at Israel have only killed two people while the air strikes from Israel have killed dozens of Palestinians — including innocent children. 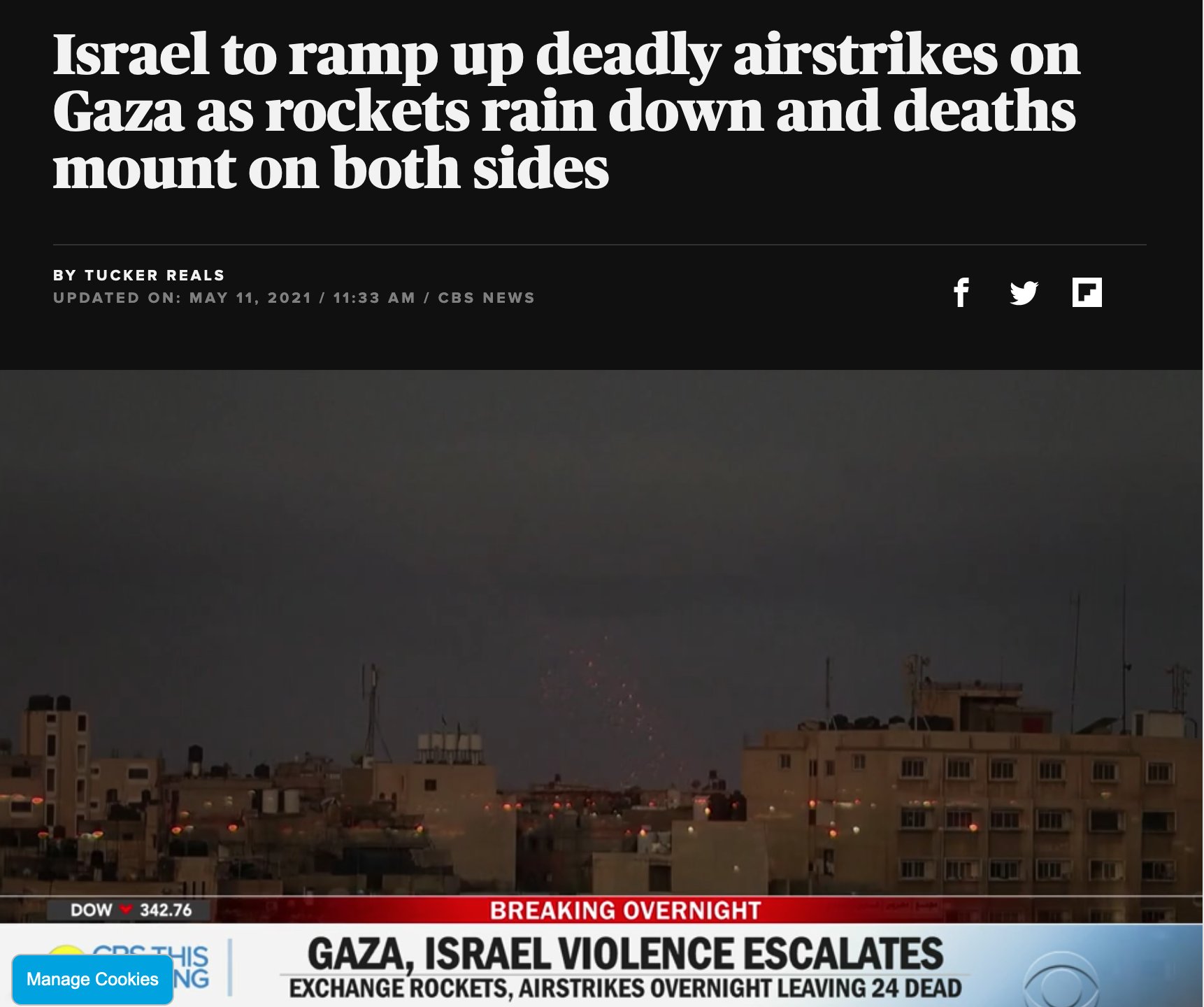 For the fifth example, there are multiple outlets all running with the narrative that Israel is “responding” to Hamas rocket fire. As MacLeod points out, “the Israeli government, as a policy, always tries to present itself as “responding” or “reacting”, and not the initiator.” And the mainstream media helps to push that narrative for them.

For those who may be unaware, Israel is not responding to the rockets, the rockets were a response to an unprovoked attack, carried out by the IDF on innocent civilians as they celebrated Ramadan.

There you have it. The arbiters of truth, the fact-checkers, the mainstream media who can do no wrong, are blatantly misleading their readers to cover up the crimes against humanity being carried out by the government of Israel against the Palestinian people.

They have no credibility yet they demand every bit of it.

Pink Floyd front man Roger Waters, another outspoken critic of Israel, summed up this scenario quite clearly in a 2016 interview when he pointed out that anyone who speaks out about the apartheid state is labeled as anti-Semitic, so the media and politicians alike curtsey to the tyranny.

“The only response to (boycott, divestment and sanctions (BDS) campaign against Israel) is that it is anti-Semitic, I know this because I have been accused of being a Nazi and an anti-Semite for the past 10 years. My industry has been particularly recalcitrant in even raising a voice [against Israel]. There’s me and Elvis Costello, Brian Eno, Manic Street Preachers, one or two others, but there’s nobody in the United States where I live. I’ve talked to a lot of them, and they are scared s***less….” he said.

“If they say something in public they will no longer have a career. They will be destroyed. I’m hoping to encourage some of them to stop being frightened and to stand up and be counted because we need them. We need them desperately in this conversation in the same way we needed musicians to join protesters over Vietnam,” Waters added.

Sadly, five years later, and after countless more bodies have piled up, none of this has happened.

The Bigger Danger with CRT in Education

You Are Being Hunted, Americans: The CDC Is Now Illegally Tracking “Unvaccinated” People

A Disgusting Display Of Dumb Dogs Behind The Sacred Desk