Schaeffer Cox is an innocent, Christian American who was wrongfully pursued by the federal government after he exposed human trafficking and corruption in government when he ran for Congress in Alaska.  Agents of the FBI determined to murder Schaeffer, along with his wife and little boy and had plotted to do so and frame him for crimes he did not commit, but were hindered by an unforeseen circumstance.  As a result, they were only able to send Cox to a black site prison on US soil in Indiana where his constitutional rights are violated daily.  Now, activists have banded together and come up with $25,000 to offer for information that will lead to Cox’s exoneration.

“Several people come together and pledged $25,000 for information leading to my exoneration. Print the poster and post it everywhere you can. ” 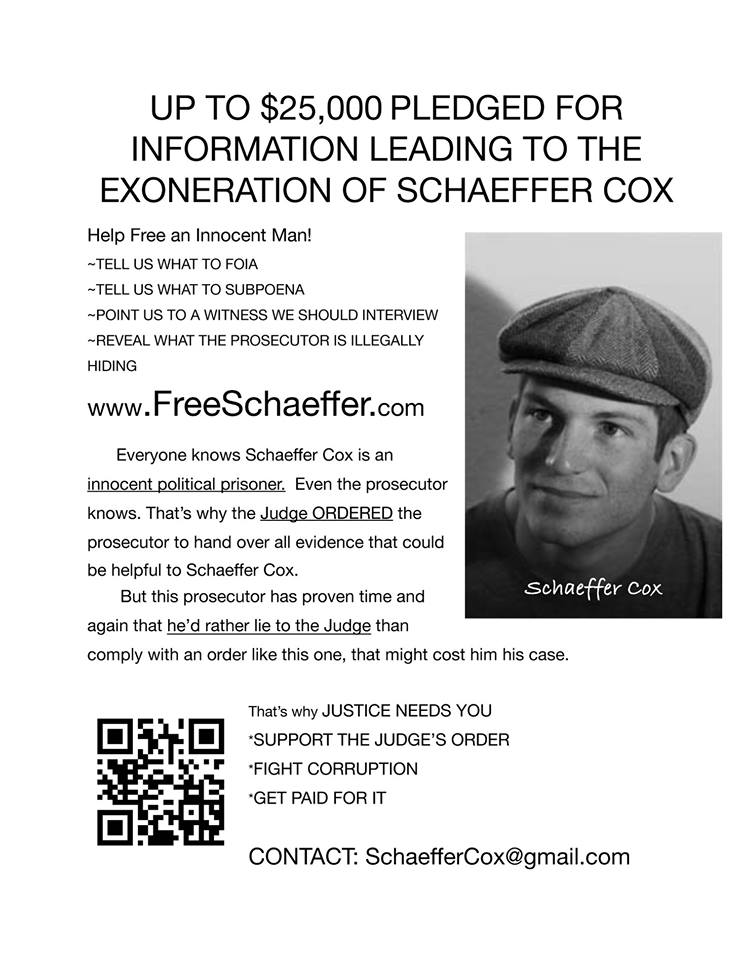 “The FBI convicts people who have not committed any crimes,” wrote Cox.  We know this from other high profile trials such as the Bundy Ranch circus that took place in Nevada a few years back, as well as the one that took place in Oregon.

Cox writes on how the FBI convicts innocent people.

“So far, Bill Fulton and JR Olson are the only two informants officially acknowledged by the prosecution,” Cox wrote.  “But we now have government documents that suggest there may actually have been as many as 14 informants. The jury should have known about the other informants (because it proves the whole phony ‘investigation’ was fake and fabricated by the FBI). In other words, the 2 ‘pull’ informants came to court and testified about the rumors they had heard from the 12 ‘push’ informants.”

Why so many informants?  Consider that there were dozens of informants that snitched on their fellow citizens during the Bundy Ranch standoff and during the Oregon protest.

Cox informs the public, “The FBI uses what they call the ‘push-pull’ technique to entrap innocent people they disagree with politically.”

It works like this: The FBI sends in a large team of informants to surround the target and start a bunch of rumors. Then they send in a second smaller team of informants to “investigate” the rumors that the first team of informants are whipping up. Once they’ve got everything stirred up real good, a prosecutor will go to his whores in the media and spoon feed them the salacious fake narrative about the hoax investigation. While this is going on, they put you on trial, the jury takes one look at the case, says “if there’s smoke there must be fire,” and convicts you. But what the FBI keeps hidden is that it was THEIR OWN informants blowing all that smoke! The entire Russia Collusion hoax was a “push-pull,” just like my case. It’s trial by show biz!

The Push/Pull technique used on me is exactly the same as the Push/Pull used to get the phony FISA warrant on Trump. It’s an FBI octopus “investigating” its own tentacles.

Cox finalized his plea by writing, “The Judge has ordered the prosecution to tell us who all the informants are. But the prosecutors are on the honor system for that. And these prosecutors-Joe Bottini and Steve Skrocki- have a long history of lying and hiding evidence to get and keep convictions on innocent people (Senator Ted Stevens, Alaska legislators: Kott, Kohrieg, and Weyhraunch, all of Polar Pen). So the honor system won’t work here. That’s why we need truth tellers to come talk to us.”

Cox believes that all the people are in the same fight with him as he is fighting against a tyrannical beast and thanks those who have and are coming to his aid in “keeping my hands up in the battle.”

If you wish to pledge money to help Schaeffer Cox, you can do so here and you can contact him with any information that will help exonerate him by going to FreeSchaeffer.com.

There are additional things that you as a law-abiding, free citizen can do to help Schaeffer.

Former MCC Inmate: "No Way Jeffrey Epstein Could Have Killed Himself"