The United Kingdom media is up in arms over The Sons of Liberty’s health and wellness expert Kate Shemirani’s reminding doctors and nurses administering the deadly experimental COVID shots without informed consent. In reminding the people of what took place at Nuremberg and the ultimate justice administered to those involved, many of which were doctors and nurses, she also declared she was firing and offensive salvo to start holding doctors and nurses accountable for their involvement in genocide. She also called for them to repent by “getting off that bus.” Now, a British attorney has spoken out and corrected the Mockingbird media and the criminal mayor of London’s calls for her to be investigated, as well as those who have issued criminal death threats against Shemirani.

Attorney Anna de Buisseret made the following comments on Telegram.

“As a senior UK lawyer myself, I have listened to and read the comments about what Ms Shemarani is saying.

She’s referring to the Doctors and Nurses Trials held in Nuremberg during the 1940s onwards in which numerous doctors and nurses were found liable and guilty for countless deaths from injections and other medical procedures.

The sentence handed down by the Judges was imprisonment or the death penalty (by hanging) for those found guilty.

So she is stating the facts of the Nuremberg Trials.

The current law is set out in the Rome Statute of the International Criminal Court.

The sentences for breaches of the Rome Statute are contained in the Statute.

Breaches of the Nuremberg Code will fall within various laws both civil and criminal.

““On December 9, 1946, an American military tribunal opened criminal proceedings against 23 leading German physicians and administrators for their willing participation in war crimes and crimes against humanity.

This was Case #1 of the Subsequent Nuremberg Proceedings.

Brigadier General Telford Taylor was Chief of Counsel during the Doctors Trial. In Taylor’s own words, from the opening statement by the prosecution:

“The defendants in this case are charged with murders, tortures, and other atrocities committed in the name of medical science.

The victims of these crimes are numbered in the hundreds of thousands.

A handful only are still alive; a few of the survivors will appear in this courtroom.

But most of these miserable victims were slaughtered outright or died in the course of the tortures to which they were subjected.

For the most part they are nameless dead.

To their murderers, these wretched people were not individuals at all.

They came in wholesale lots and were treated worse than animals.”

The Judgments from these Trials should be read by anyone conducting medical procedures to ensure that they are not in breach of the law.

If the idea that the death sentence would be handed down to a perpetrator is something that people are concerned about, I invite you to read the case law yourself on the law.

And the Nuremberg judgments.” 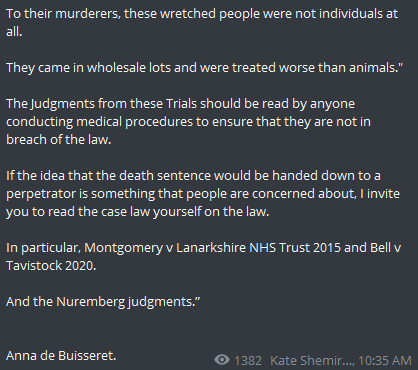 She has also spoken out to the police about their violations of law.

We also interviewed Anna at a recent London protest. Pick up our brief interview with Anna at the London protests that took place on July 19, 2021 during our live radio show. The interview begins at the 1:08:45 mark.

The Mainstream Media Wants You To Believe That You Voted For Them! Who Is Reporting The Results?