The National Transportation Safety Board’s initial investigation of a Tuesday’s aircraft crash in East Hartford, Connecticut should be a serious concern as it was a possible attempt to destroy one major US military defense contractor. As it seems, Muslims are possibly attempting to carry out an attack by using airplanes again.

The investigation by The National Transportation Safety Board also indicates the crash is the result of an intentional act, which means the likelihood this involves an act of terrorism. FBI and police have also raided the pilot’s apartment and are questioning three of the associates of Feras M. Freitekh, the pilot. The Jordanian students were also studying to become pilots. What is strange about this story is the ring of Muslim student pilots and the testimony of the co-pilot stating that the suicide pilot did “an altercation in the cockpit during their training flight, and the instructor was unable to regain control of the plane from the [Muslim] student pilot.”

Freitekh, a Muslim homosexual, who was killed on impact is a 28-year-old Jordanian national from a Palestinian background who was studying to become a pilot died after crashing a small plane Tuesday afternoon in Connecticut, and the instructor pilot who survived the crash said it was intentional. Family and friends of Freitekh are already writing about him on Facebook with oodles of praises from “good man” “hero” to “Allah be with him” in Arabic. Click and check it out for yourself. Rafeek Zabian comments “Our old friend, Feras Freitekh, is with Allah, after he fulfilled his dream to fly, he died as a pilot, yes, and he accomplished his dream, may Allah be with you”.

People see him kissing the tip of the propeller and they do not think. The kiss is a kiss for the tip of his missile he is using. He and the Muslims and relatives commenting know why he came to the U.S. The argument with the co-pilot that he “does not want to fly anymore” is an excuse to land early because his intention is likely to swerve at the US defense contractor facility. It would take hours to include all the other praises from folks who would seem normal to the naked eye, yet they harbor ill for the United States. 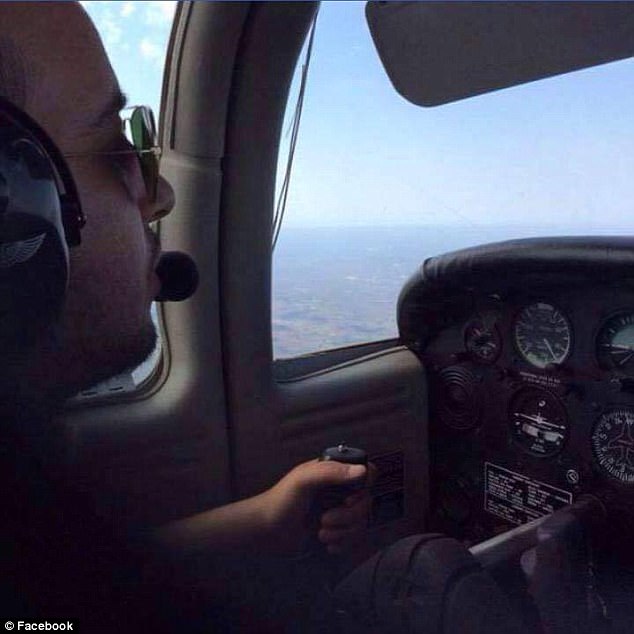 A high-ranking law enforcement source told the Hartford Courant there was an argument between the student pilot and the instructor prior to the crash. “Terrorism is a criminal act,” East Hartford Police spokesman Lieutenant Joshua Litwin said at a press conference. “There is a lot of criminal investigators on scene. Nothing has been ruled out.”

Feras M. Freitekh is also related to Sally Freitekh, fashion model and candidate for the title of Miss Arab America. These are from a Palestinian origin from Nablus.

The surviving flight instructor, identified by the Courant as Arian Prevalla, was able to get out of the plane after the crash and is expected to survive.  Freitekh came to the United States from Jordan in 2012 on a temporary M-1 visa for flight school. The FBI and local police raided an apartment on Annawan Street as part of the investigation, WVIT-TV reports. Neighbors told WTIC-TV that four men lived together in the apartment targeted by police. Sources told the Hartford Courant the three other men who lived there were also foreign nationals studying to become pilots.

And don’t be fooled, the pilot, Feras M. Freitekh also has another Facebook as Rafael Majdi Freitekh and he is gay with all the rainbow flags. He was not a ‘peaceful Muslim’ and neither was he a ‘peaceful gay’ after all, as society tries to arm-twist us to believe about Muslims and gays.

When on June 27th, 2015 the supreme court ruled that same-sex couples can marry nationwide, Freitekh was elated and posted the photo above on his Facebook on the same day. He then shortly after stops writing anything on his timeline for a year is perhaps the man decided to go dark becoming a lone-wolf. Freitekh’s two best buddies are also pilots and seem to be homosexuals: Omar Daher and Omar Salameh.

He writes his friends telling them “Photo of my wedding”

Shoebat.com contributor Andrew Bieszad tells us that his father works at the Hartford Grainer Airport and he has witnessed many Muslims going to that aviation flight school. “They come in, Arabs, with little english, and they pay cash and leave, never to be seen again” says Mr. Bieszad.

The suicidal Freitekh before his intentional crash, writes his other friend Hamad Yousuf Sabboubeh, another student pilot, all the friends use Arabic in English letters, he tells him “first I need to fly more before I get to the Airbus”.

Saboubeh then says “by middle of November, our Lord willing” then posts this photo:

Mohammed Kloob says that Freitekh was “my brother and my best friend” “may Allah give him heaven”.


We live in strange times, where so many people do not look or seem normal anymore. It is as if there is a mass global possession taking place on a daily basis and within a couple decades, the normals will simply want to hide while the zombies take control of everything. Perhaps I am exaggerating, but perhaps from what we see, this is becoming a reality where the normal is called abnormal and the abnormal becomes the norm while no one dares to say that the emperor has no clothes. It is as the fruits of the spirit are gone and what we have is what the Good Book told us about:

Know also this, that, in the last days, shall come dangerous times. Men shall be lovers of themselves, covetous, haughty, proud, blasphemers, disobedient to parents, ungrateful, wicked, Without affection, without peace, slanderers, incontinent, unmerciful, without kindness, Traitors, stubborn, puffed up, and lovers of pleasures more than of God: Having an appearance indeed of godliness, but denying the power thereof. Now these avoid. For of these sort are they who creep into houses, and lead captive silly women laden with sins, who are led away with divers desires: Ever learning, and never attaining to the knowledge of the truth. (2 Timothy 3:1-7)

The instructor pilot who survived the crash was hospitalized with serious burns, CBS News reports. He was identified as Adrian Prevalla by the Hartford Courant. Officials say he is cooperating with the investigation. He runs the Hartford Jet Center, according to his Linkedin profile. The flight school is based at Hartford-Brainard Airport, where the plane took off from on Tuesday.

Article posted with permission from Shoebat.com