Home»Commentary»Did Jeffrey Epstein Actually Commit Suicide, Was He “Suicided” Or Was His Death Faked?
Commentary

Did Jeffrey Epstein Actually Commit Suicide, Was He “Suicided” Or Was His Death Faked?

No one that I know of is buying the story that Jeffrey Epstein committed suicide.  Not one person I’ve spoken to or messaged.  Conflicting reports, along with the Manhattan Correctional Center gatekeeper answering the phone are making it virtually impossible for anyone to trace whether Epstein’s body is anywhere in New York.  This all leads me to question what has happened to Epstein.

First, on Friday, a huge document dump was unleashed related to the convicted pedophile’s trafficking of young girls that named big names.

Maxwell All Searchable by CNBC.com on Scribd

Common Dreams reported on the documents:

On Wednesday, L Brands CEO Les Wexner, whose company owns Victoria’s Secret and other brands and who was long connected to Epstein, claimed that Epstein had misappropriated large sums of money from Wexner and that the two had not been close since 2007.

“We discovered that he had misappropriated vast sums of money from me and my family,” Wexner wrote in a letter to his charitable Wexner Foundation Community. “This was, frankly, a tremendous shock, even though it clearly pales in comparison to the unthinkable allegations against him now.”

The next day, a woman who claims Epstein raped her when she was asked a Manhattan court to force Epstein to reveal the name of the woman who recruited her. The recruiter’s identity is needed, lawyers for Jennifer Araoz argued, because Araoz wishes to include her in a suit against Epstein.

The order came from the Second Circuit Court of Appeals in July, as Courthouse News reporter Adam Klasfeld reported at the time. The ruling (pdf), written by Circuit Judge Jose Cabranes, determined that the release of the documents was in the public interest.

“We have long noted that the press plays a vital role in ensuring the public right of access and in enhancing ‘the quality and safeguards the integrity of the fact-finding process,’” the July opinion reads. “When faithfully observing its best traditions, the print and electronic media ‘contributes to public understanding of the rule of law’ and ‘validates [its] claim of functioning as surrogates for the public.’”

Documents are still being uploaded for public perusal.

But they’re sure to have at least some people feeling nervous, as Klasfeld reported:

Epstein separately faces sex-trafficking charges that have heaped scrutiny on two U.S. presidents, Prince Andrew of England, and other titans from the legal, finance, scientific and business elite known to have been linked to him.

And, as Klasfeld noted on Twitter, today’s dump isn’t everything.

“What’s been released today isn’t the entire tranche that the Second Circuit ordered unsealed last month,” said Klasfeld. “The majority of the unsealing will be performed by U.S. District Judge Loretta Preska on remand, but make no mistake, this is quite a flood today.”

Friday’s revelations came from more than 2,000 documents that were unsealed by the U.S. Attorney’s Office for the Southern District of New York.

The papers included affidavits and depositions of key witnesses in a lawsuit the now-33-year-old woman, Virginia Roberts Giuffre, filed against Epstein and his associate, Ghislane Maxwell in 2015. Giuffre accused the duo of keeping her as a “sex slave” in the early 2000s when she was underage.

In ordering the documents released, the U.S. Court of Appeals for the Second Circuit also warned that the allegations contained within them are not necessarily proven.

In another deposition, Giuffre also reveals that she was “trafficked” to Mitchell, a former Senate Majority leader who represented Maine from 1980-95 and was later named special envoy to the Middle East by President Obama. A sworn affidavit by a former Epstein employee, Juan Alessi, also alleges Mitchell, 85, of having associated with Epstein.

Now, this brings us to a repeat of what occurred, or what we were led to believe a couple of weeks ago in Epstein’s alleged suicide attempt.

RELATED:  Latest Trump Tweets: Prime Example Of Why These People Need To Be Removed From Office

Previously, I reported that there were no visible signs of injury to his body.

“Emergency responders received a 911 call around 6:40 a.m. at Metropolitan Correctional Center, where Epstein was being held without bail, awaiting trial on charges of conspiracy and sex trafficking,” ABC News affiliate WTVD confirmed.

“A gurney carrying a man who looked like Epstein was wheeled out of the Manhattan Correctional Center around 7:30 a.m. The ambulance went to New York Downtown Hospital,” the New York Post added.

Upon arrival, he was reportedly in cardiac arrest.

The suicide comes roughly two weeks after Epstein, who was arrested and charged with sex trafficking underage girls early last month, was placed on suicide watch after what appeared to be a failed suicide attempt.

At the time he was found nearly unconscious with marks on his neck at a cell in the same Manhattan facility, the Metropolitan Correctional Center, where he reportedly died Saturday.

Calls to New York Downtown Hospital rendered that Jeffrey Epstein was never there.

Additionally, the man answering the phone at Manhattan Correctional Center when you press zero for the operator to ask about information on inmates should be summarily fired for his unprofessionalism and failure to address my concerns and point me to the proper person to speak with concerning Epstein.  This man was called a dozen times and half the time, apparently knowing my number, he either hung up on me or was incredibly rude.  Try it yourself at 646-836-6300.

I have spent over an hour attempting to determine where Jeffrey Epstein’s body is located in New York with absolutely no one clearly stating something that can be confirmed.

Yet, with more conflicting reports, the New York Post reported:

Department of Justice spokesman Lee Plourde told The Post that Epstein, 66, was not “currently” on watch in his cell at the Manhattan Correctional Facility while he awaited trial on child sex-trafficking charges.

Plourde refused to say whether that meant Epstein had been taken off additional monitoring or whether he had never been getting special attention to make sure he did not kill himself.

“I’m not going to discuss his previous medical status,” he said.

Epstein had reportedly been placed on suicide watch after he was found nearly unconscious in his cell on July 23. There was some question about whether the incident was a suicide attempt or an assault, and investigators noted that the marks on his neck were “more consistent with being choked than hanging yourself,” one source told the Post.

Plourde knows, and so do those in NYPD over Epstein.  Epstein was taken off suicide watch shortly before his alleged “suicide.”  Is any sane person, who has a working brain, buying what these people are shoveling?  Can you smell the BS?

However, amidst attacks on the Second Amendment by the current administration, this seems a good news piece to cover over all of that, doesn’t it?  Additionally, the audio to dispatchers does not seem to confirm that story that Epstein was in cardiac arrest but was rather stiff and cold. 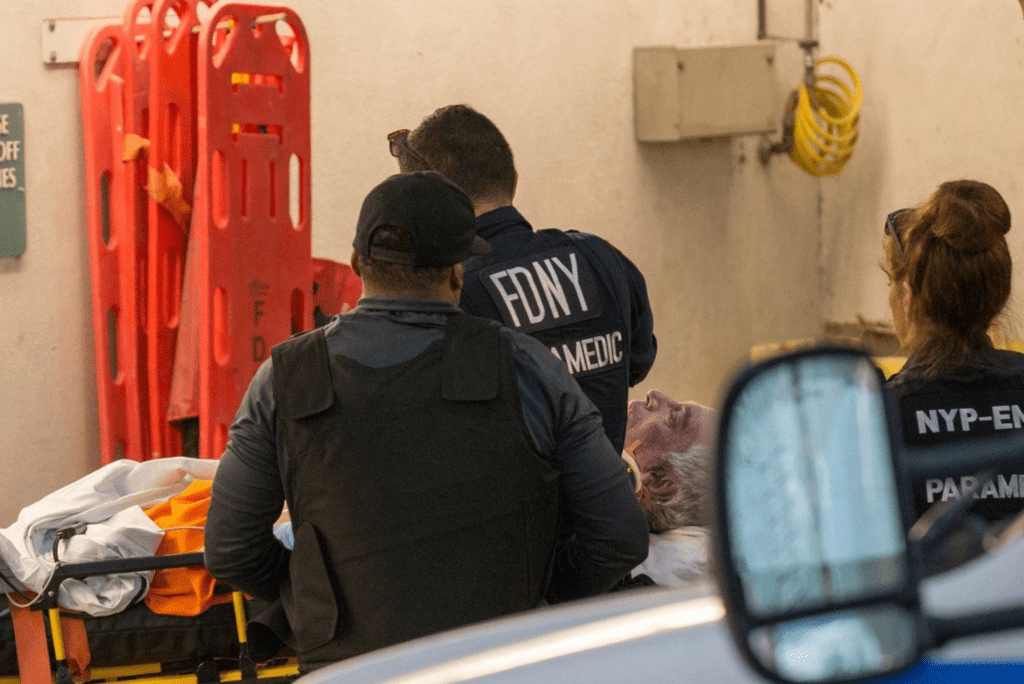 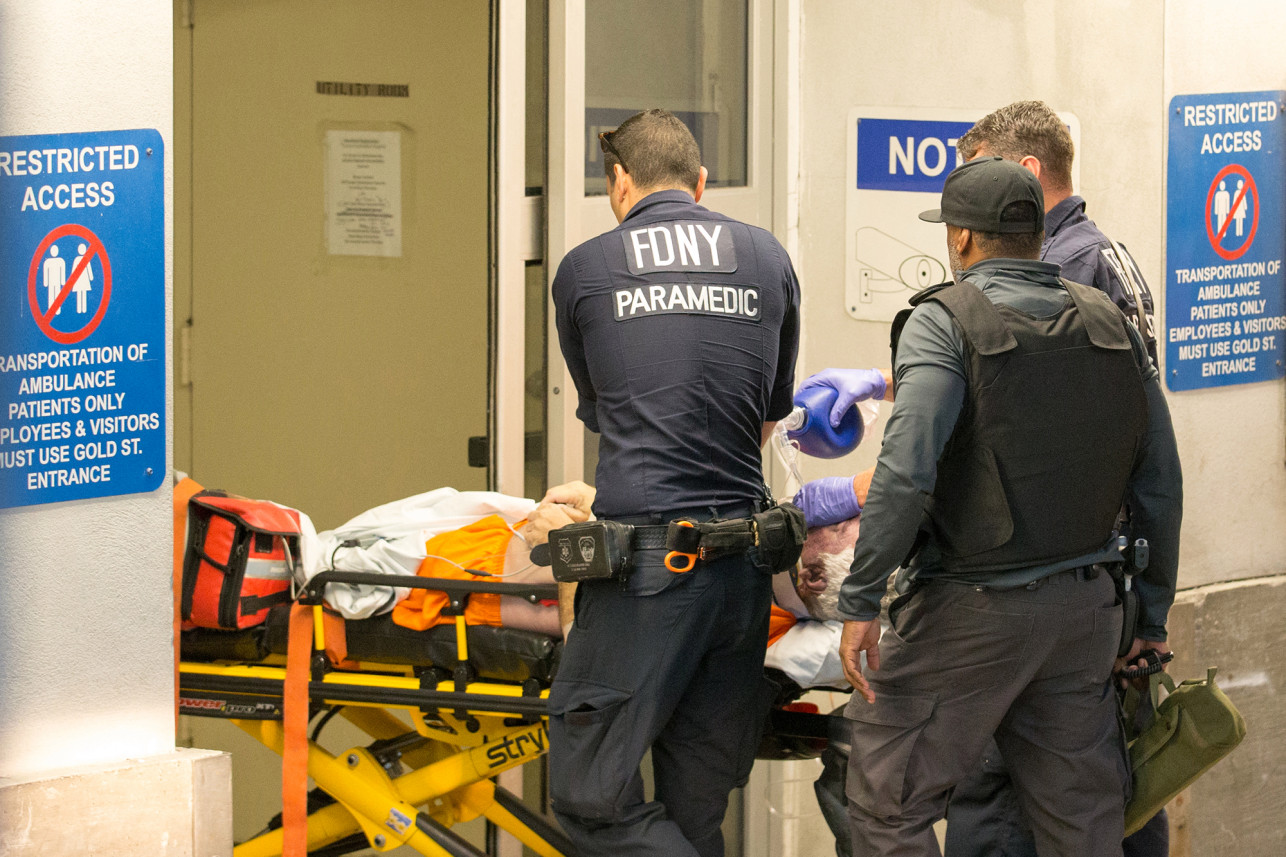 Take a good look at the size of Epstein’s head compared to everyone else and consider that he is in the background, which means it should be smaller, right?  It’s huge!

Look at the second photo.  Where are his legs?  Perhaps I’m missing something here, but it looks like they pretty much disappear at mid-thigh or get rather thin at that point.  I could be wrong as angles change things, but I’m not buying that Epstein committed suicide.  I’m just not.

I ask, did Epstein use those he knew on the inside to help him actually escape or was he “suicided”?  If he faked his death, all he needs to do is get to his little island to escape the long arm of the law and with the friends that he has, that shouldn’t be an issue.

Personally, considering all he had done and the fact that he went through all of this before doesn’t lead me to believe that he committed suicide.  Considering the people named in documents, and those who stood to lose by this guy talking, my guess is that either they were really good friends and have planned an elaborate escape, confusing people with conflicting media reports until they get their story straight, or several people were involved in “suiciding” Jeffrey Epstein.

What do you think?

A Lesson About Law From a Birmingham Jail

Deadly Distractions: Laying the Groundwork for the Next Civil War

Did Jeffrey Epstein Actually Commit Suicide, Was He “Suicided” Or Was His Death Faked?