Home»Politics»FEEL THE BERN: SOMEONE TRIED TO GET BERNIE SUPPORTERS TO LITERALLY BLOW THEMSELVES UP WITH THIS
Politics

FEEL THE BERN: SOMEONE TRIED TO GET BERNIE SUPPORTERS TO LITERALLY BLOW THEMSELVES UP WITH THIS

Here’s one way to Feel the Bern… (sorry, worst pun ever).

Someone really wanted Bernie Sanders’ supporters to kill themselves. Literally. With a meme. 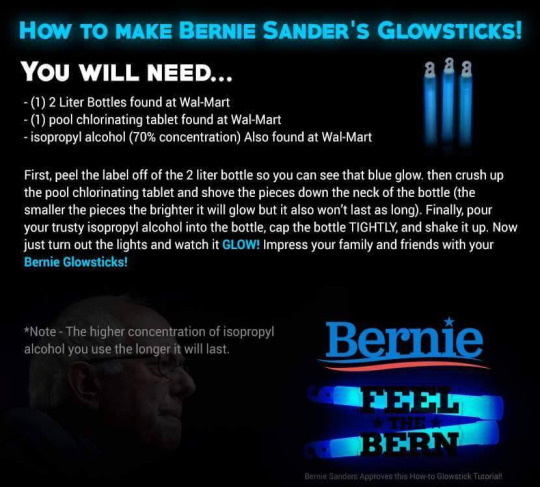 This meme, complete with an encouraging fake “Bernie Sanders approves this tutorial” line at the bottom, began making the rounds across the Internet on major social media sites like Tumblr and Reddit a couple of days ago.

While it appears to be cutesy instructions for a Bernie glow stick, the recipe is actually for a potentially deadly Anarchist Cookbook-style chlorine bomb.

According to Tech Mic, here’s what would happen if someone actually made this Bernie “glow stick”:

The instructions require you to mix a swimming-pool-chlorinating tablet with isopropyl alcohol, then shake the ingredients together inside of a closed bottle. The chemical reaction rapidly generates enough chlorine gas to cause a pressurized explosion in the bottle, releasing the gas into the air.

If the lungs are exposed to enough chlorine gas, it begins to attack the respiratory system and can cause the lungs to fill with fluid until the victim asphyxiates.

What in the hell is wrong with people?

This has got to be, hands down, the most bizarre and insane election cycle America has ever witnessed in the history of America.

Donald Trump and the "Pain Principle"

FEEL THE BERN: SOMEONE TRIED TO GET BERNIE SUPPORTERS TO LITERALLY BLOW THEMSELVES UP WITH THIS