If you want to discuss meddling in the US elections, you need look no further than the CIA startup, Google and it’s manipulation of search results.

We’ve known for some time that Google is manipulating search engine results.  They claim that it is to give the end user a better experience, but nothing could be further from the truth.

Nothing was wrong with how search results were being displayed before Google, along with social media platforms like Twitter, YouTube and Facebook went full-on Nazi censors on conservatives or anyone that opposed their worldview.

However, a new report is out that shows that Google’s search manipulations could swing nearly eighty percent of undecided voters.

The report was written by Robert Epstein, Roger Mohr, Jr., and Jeremy Martinez of the American Institute for Behavioral Research and Technology.

According to the report,

A series of randomized, controlled experiments was conducted to quantify the power that search suggestions (sometimes called autocomplete suggestions) have to shift opinions and voting preferences.

We call the power that search suggestions have to affect opinions the Search Suggestion Effect (SSE).

So, what did they discover?

In a series of controlled experiments reported in the Proceedings of the National Academy of Sciences (PNAS) in 2015, Epstein and Robertson demonstrated the power that search results have to shift people’s opinions and voting preferences without their knowledge – up to 80 percent in some demographic groups. They labeled this phenomenon the “Search Engine Manipulation Effect” (SEME) (http://bit.ly/1REqzEY). That report has since been downloaded more than 94,000 times from PNAS’s website (http://bit.ly/2BCEFTW).

The report demonstrates that by Google simply adding a positive or negative search suggestion regarding a particular candidate that it will affect the search results greatly, influencing potential voters.

To demonstrate how this looks to the end user, take a look at these search suggestions provided by Google for Donald Trump and Hillary Clinton.

The first came from October 2017 for the letters typed “trum,” and for the results for “Hillary Clinton is” are from August 2016.  Note the difference between the search engine results of Google, Bing and Yahoo on the Clinton search! 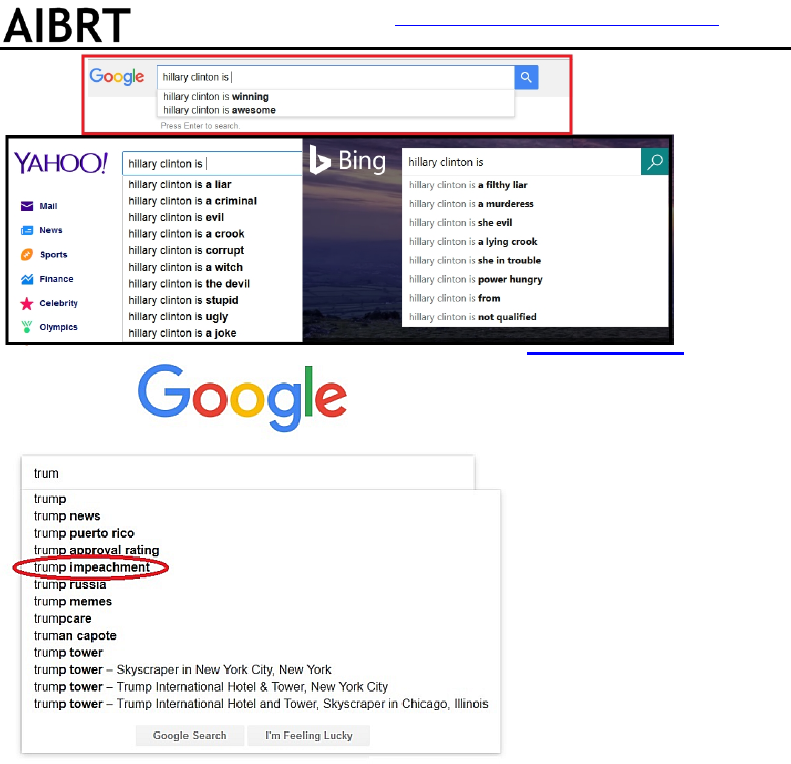 Influencing politics in this manner is far more devious and sinister than any Russian influence simply because Google is a US-based company that was funded by the Central Intelligence Agency.  This can only be considered a sort of propaganda against the people of the united States.

Epstein also conducted a similar report in 2015 and wrote about it at Politico, demonstrating that virtually nothing has changed since that time.

Of course, if you can’t manipulate people to your candidate by search results and silencing opposition on social media platforms, there’s always the good old manipulating the electronic voting machines.

We all are aware of the ads that Google offers, which are arguably the highest paying ads on the internet for websites.  However, did you know your search suggestions are also manipulated by Google?

The report identifies that when users enter “a” Amazon, who is Google’s top client on Google Adwords, is at the top of the suggestions, and entering a “t” lists Target, Google’s third-biggest advertising client, at the top.

Other letters drive users to other top advertisers such as Best Buy, Home Depot and Lowe’s.  Companies that begin with the letter “g” obviously get bumped for Google.

So, if you are looking for a real problem in influencing politics, look no further than Google-CIA.  Don’t say you weren’t warned.