This is so rich! The people are not backing down. They know their liberty and even lives are at stake. The man-child, Islamic, effeminate Justin Trudeau hasn’t gotten it yet. He claims that the protesters have been heard and they should go home, but apparently, they have not been heard.

Meanwhile, Trudeau issued threats not only against the protesters but also against their families. He’s too much of a coward to actually go and speak to the people but sends out his Nazi agents of the state disguised as peace officers to enforce his lawless edicts.

Ezra Levant pointed out, “So the truckers aren’t backing down. All Ottawa courts would do is end the honking. The Coutts and Milk River blockade probably have 5,000 people in the middle of the prairie. And now the single most important bridge in North America is locked down.”

The Freedom Convoy trucker protest has now expanded and is starting to hit more U.S-Canada border crossings, while the main trucker convoy remains in downtown Ottawa. The Coutts border crossing, between Alberta and Montana, is shut down as truckers have closed every lane.

However, after 12 days of pressure – and a typical Alinsky response from Canadian Prime Minister Justin Trudeau – things are beginning to escalate. Now, in Windsor, Ontario, the Ambassador Bridge to Detroit – the busiest land crossing on the U.S-Canada border, has been effectively blocked.

The government of Canadian Prime Minister Justin Trudeau is starting to panic. “They’re essentially putting their foot on the throat of all Canadians,” Bill Blair, Canada’s minister of emergency preparedness, said Wednesday. “It can’t be allowed to persist.” Yet, the Trudeau government is quickly discovering their biggest Achillies’ heal in this issue. There is no logistical way to stop truckers from blocking the roads and bridges.

The logistics of trying to forcibly remove the big rigs with tow trucks is a nightmare. Additionally, the tow truck companies are not willing to support the government in a fight against their own profession. Slowly, the uber elite who think they are the rulers are starting to realize just how little power they have when the “workers of the world” really do “unite”. Trudeau really is starting to panic. 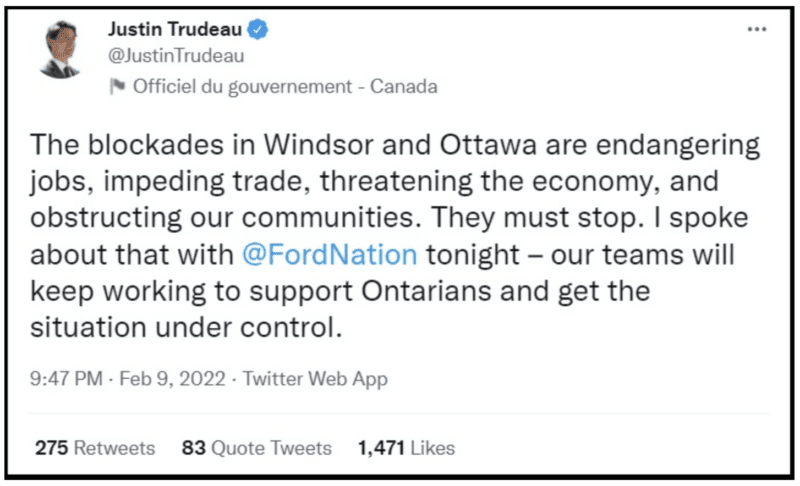 CANADA – Canada’s usually sleepy capital is under a state of emergency. It’s been nearly two weeks since the self-styled “Freedom Convoy” reduced its key arteries to a parking lot. Two crossings on the U.S.-Canada border, including the busiest, have been partially blockaded, and demonstrators were attempting to block a highway to a third.

[…] Meanwhile, the Department of Homeland Security is warning that U.S. truckers are potentially planning to block roads in major metropolitan areas in protest of vaccine mandates, and that the protest activity could impact the Super Bowl in Los Angeles this Sunday as well as President Joe Biden’s State of the Union address March 1, according to a copy of the bulletin obtained by The Washington Post.

Canadian officials continued to condemn the “illegal” blockades – which have been boosted by far-right and anti-vaccine groups around the world and inspired copycat demonstrations from Europe to Australia – and detailed their deleterious effects on national security and the economy. But there were few indications of how or when authorities will bring them to an end.

Officials in some cities said they needed more police officers. Others said tow-truck operators were refusing to help. The federal government said it had set up a group of federal, provincial and local officials to respond – but the government of Ontario, the most populous province, and home to Ottawa, the capital, hadn’t sent a representative.

In Windsor, Ontario, the Ambassador Bridge to Detroit – the busiest land crossing on the U.S.-Canada border and a vital corridor for the auto industries on both sides – was blockaded by up to 100 people and 75 vehicles, police said Wednesday.

Windsor Mayor Drew Dilkens appealed for more law enforcement resources. He said officials feared the use of force could “inflame” the conflict and there was a “need to plan for a protracted protest.” (read more)

Trudeau has really painted himself into a corner by first calling the truckers racist hate-filled bigots and saying he would never meet with them. Now, as their ranks and support grow, the majority of Canadians want him to do exactly that, meet the truckers and remove the covid mandates.

The Freedom Convoy truckers have all the leverage in this dynamic. The true irony is the socialist left constantly claiming the “workers of the world unite” mantra as part of their boutique leftism, yet here are the truckers doing exactly that – and the same liberals are decrying the audacity of the ruffians. You really cannot make this up.

Younger generations are watching these masks drop. The only thing we need to do is point out the hypocrisy, and the opposition falls silent.