Well, the wanna-be tyrants in the Trudeau administration just took a big hit and it’s glorious. After obtaining a court order to seize the funds that total more than $8 million for the Truckers Freedom Convoy, GiveSendGo told them to take a hike because Canada has zero jurisdiction when it comes to how they manage the funds of campaigns on their platform.

The Ontario government has moved to freeze $8 million going to the crippling trucker blockades in Windsor and Ottawa as local leaders continue to ask for help from all levels of government to end the protests.

Late Thursday, Premier Doug Ford’s government announced they had obtained a court order freezing the funds raised through GiveSendGo, an online fundraising platform that the truckers turned to when GoFundMe closed a previous effort. The GiveSendGo page indicated more than $8 million had been raised through the platform, but the protest convoy was also raising money through private transfers and through cryptocurrency.

Ottawa’s core has been blockaded for nearly two weeks by transport trucks and smaller vehicles that have parked and set up camp on downtown streets.

The blockade in Windsor, Ont., began Monday with demonstrators closing access to the Ambassador Bridge, a vital trade corridor that carries more than a quarter of trade between the U.S. and Canada.

Viva Frei is a Canadian lawyer and here’s what he said about Justin’s latest Marxist move: “Imagine thinking the best way to end a grassroots movement is to freeze the $10.5 million raised through grassroots donations. Of course these are the same idiots who think a vax passport -for a vax which prevents neither carrying nor spreading- is the best way to fight the virus”

IMAGINE THINKING THE BEST WAY TO END A GRASSROOTS MOVEMENT IS TO FREEZE THE $10.5 MILLION RAISED THROUGH GRASSROOTS DONATIONS. OF COURSE THESE ARE THE SAME IDIOTS WHO THINK A VAX PASSPORT -FOR A VAX WHICH PREVENTS NEITHER CARRYING NOR SPREADING- IS THE BEST WAY TO FIGHT THE VIRUS

Well, it didn’t take long for US/Christian “crowd-funding” site “Give Send Go” to chime in, and they delivered Justin Trudeau his biggest blow yet, by telling him to take a hike.

“Give Send Go” says they don’t care what Trudeau’s admin says about “freezing” funds, they don’t abide by Canadian law.

They will release all the money to the Trucker’s Convoy, period and end of story.

This is the movement that just a couple of weeks ago, Justin Trudeau called a “fringe” movement.

Well, it doesn’t look so fringe anymore, does it? And this movement is now kicking Justin’s butt all over the place.

You can’t “squash” this raw and very real passion:

A WOMAN AT CANADA’S FREEDOM CONVOY DESCRIBES HER TWO SONS WHO DIED OF DRUG OVERDOSE AFTER RELAPSING DURING LOCKDOWN.PIC.TWITTER.COM/NVRFOBIDOB

And it’s spreading all over the world:

MULTIPLE FRENCH FREEDOM CONVOYS WILL DESCEND ON PARIS THIS WEEKEND. THIS ONE IS FROM SOUTHERN FRANCE.PIC.TWITTER.COM/M75MAZKCRT

Trudeau has a really big problem on his hands, and it will be interesting to see how this plays out.

Here’s what communist Biden is telling him to do:

It’s okay to BURN your country to the ground like BLM, but God forbid the middle-class peacefully protests, right?

But as of now, the Trucker movement is too big to try to stop. Justin either quietly or publicly caves or this will destroy him politically.

That’s right. However, as these criminals seek to silence the people, the people’s numbers grow.

Let their cruelties swell the ranks! And they are!

Meanwhile word comes that the Ottawa Police are now threatening the protesters. Should that come to fruition, there are attorneys on the ground willing to interpose if needed. Just call 416-780-0210. 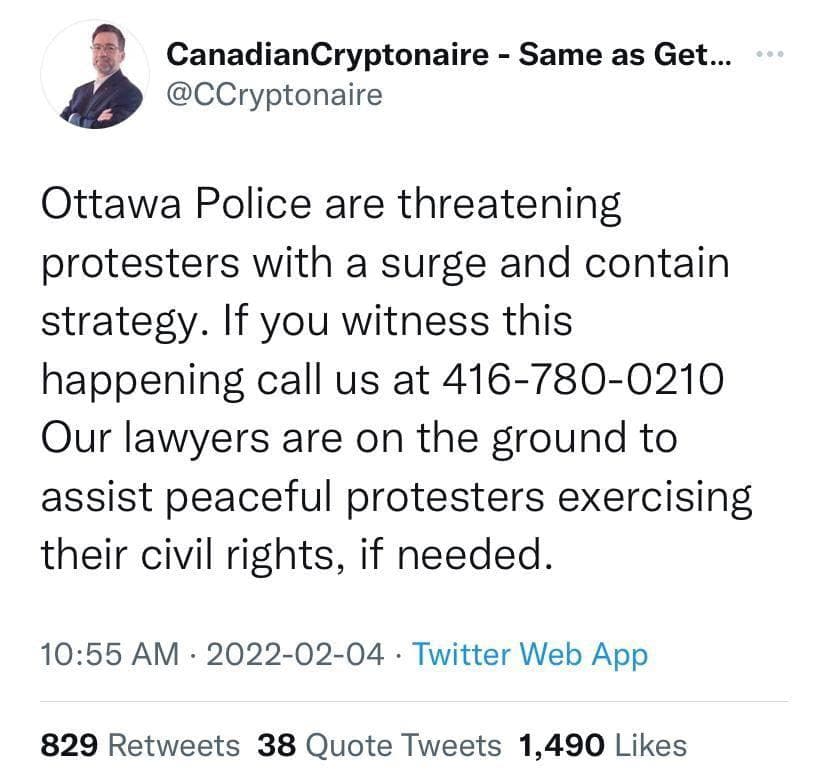 It’s absolutely incredible that this movement of the people was referred to as a “fringe minority” and yet, nearly $20 million was raised between GoFundMe and GiveSendGo in a matter of a few weeks and instead of the tyrants being able to shut the people down, the crowds only grow to the point where the tyrants are claiming it is a state of emergency.

These criminals are acting just like their daddy, the devil, aren’t they?

My Son... My Father Was Murdered In The Name Of COVID (Video)