This is another example of why GoFundMe should NEVER be used by another person… ever! The anti-American, anti-freedom website that collects donations for various causes, except for those it deems unworthy of support, collected more than $10 million for the Canadian Truckers Convoy over the past few weeks. However, they pulled the page and so another was set up at GiveSendGo, which took in more than $1 million in 12 hours before falling under a distributed denial of service attack (DDoS).

If you still want to support and can get to the page at GiveSendGo, click here.

Take a look at what was raised on GoFundMe before it was pulled. 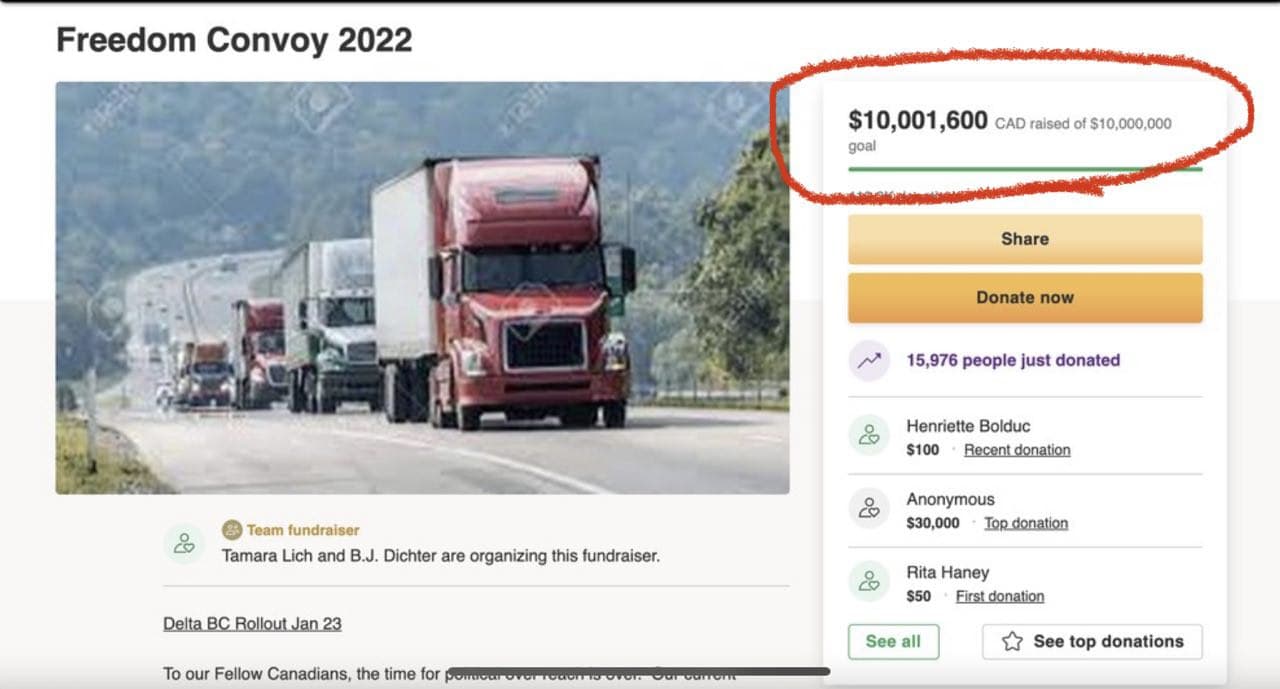 It drew immediate criticism and for good reason. In fact, we’ll see if Florida Governor Ron DeSantis puts his money where his mouth is concerning investigating the company, something he was truly unwilling to do with criminal Lee County Sheriff Carmine Marceno. 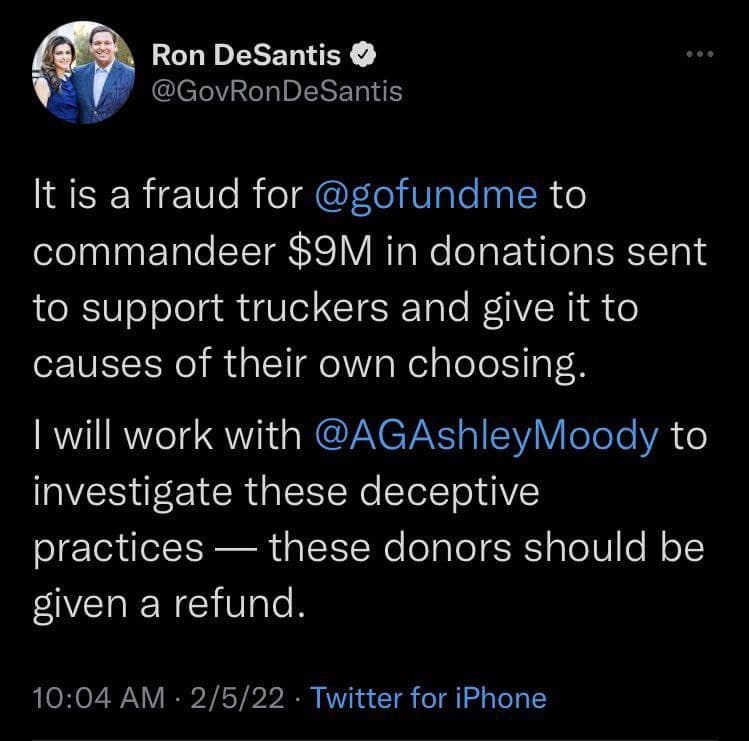 West Virginia Attorney General urges West Virginians to contact his office if they believe they have been victimized by GoFundMe. 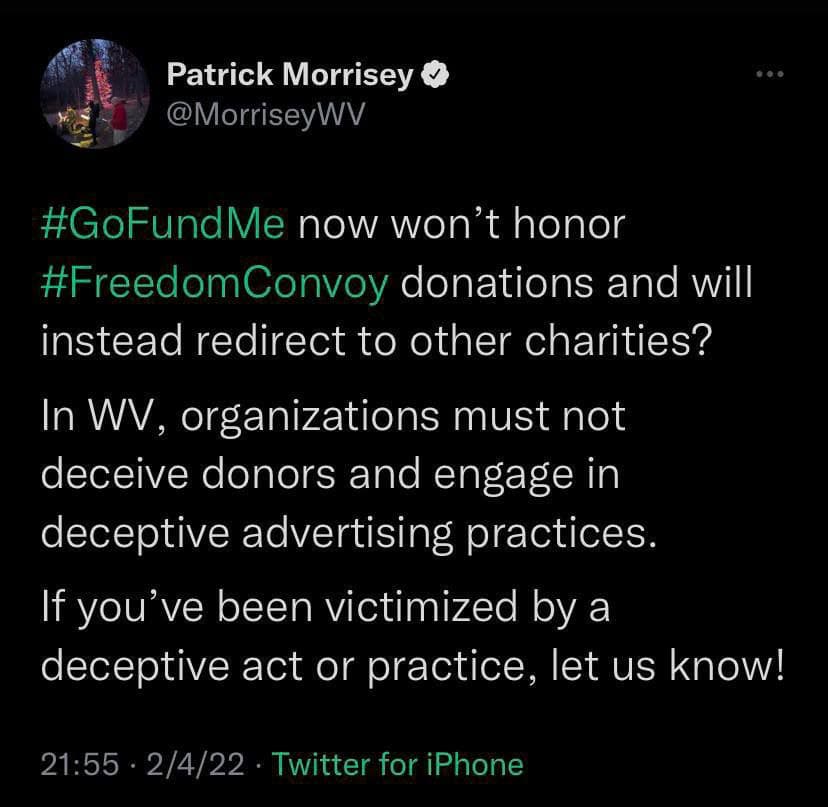 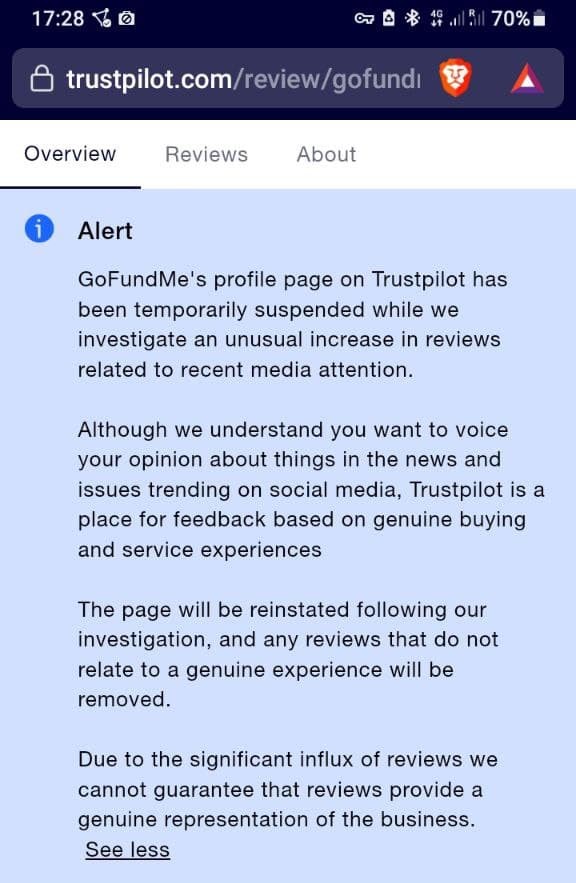 Nevertheless, GiveSendGo picked up the ball and ran with it and it’s glorious! 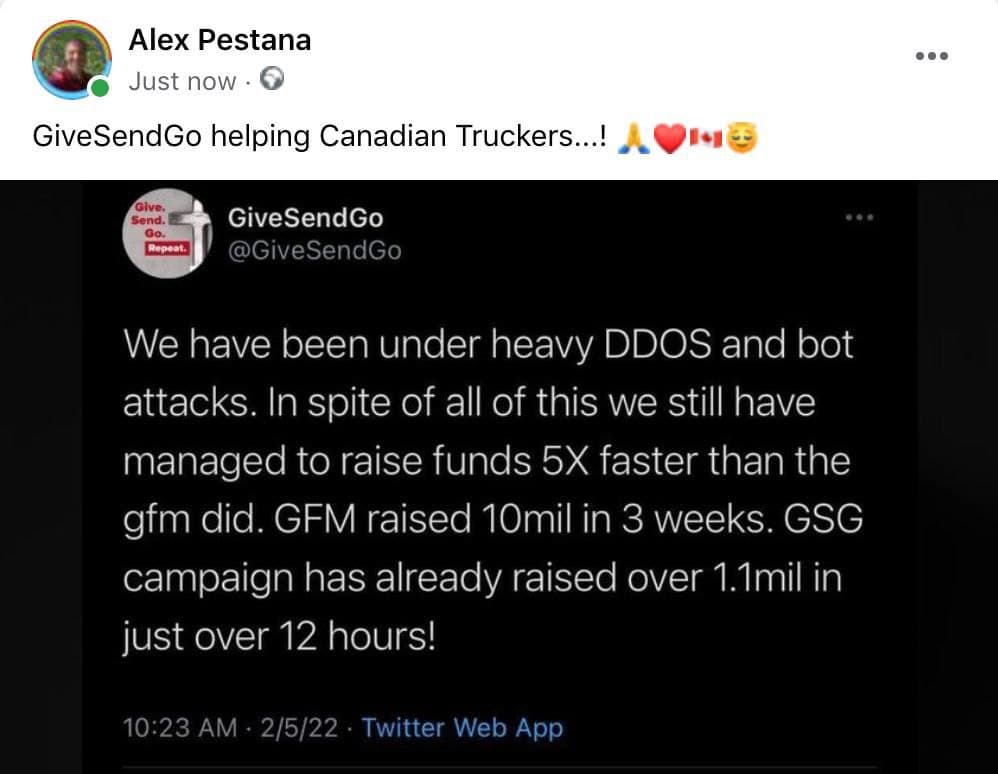 Consider that GoFundme then attempted to give the money to charities those who set up the account specified, but that didn’t go over well. 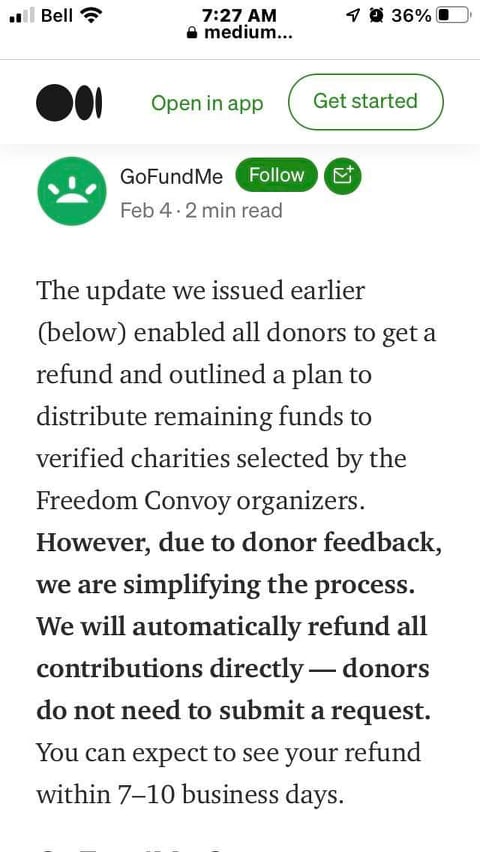 Some warned, “Do not use the gofundme.com refund form. Issue a charge-back/open a dispute with your bank, this way, gofundme will have to pay 15USD, or more, for each charge-back request, plus the refund value. This is how all banks work. Please share this as much as possible. If we’re successful, gofundme will regret doing this because they’ll lose tons of money.”

Others have started a boycott of GoFundMe. In addition to the shutdown of the Truckers Convoy fund, they also did this:

Meanwhile, this same GoFundMe supported Antifa-occupied “CHAZ/CHOP,” even after people were murdered!

GoFundMe, the crowdfunding platform that recently seized over $10 million in funds intended for the Canadian truckers’ Freedom Convoy, financially supported and promoted the illegal “Capitol Hill Autonomous Zone” or CHAZ/CHOP in Seattle, Washington during the height of the summer 2020 riots that broke out in the wake of George Floyd’s death.
As detailed by Jack Posobiec on Twitter, GoFundMe tweeted an advertisement publicizing one of the many crowdfunds set up in the CHAZ/CHOP, which was established by Black Lives Matter supporters, local gangs, and elements of Antifa, who set up a cop-free perimeter that encased several neighborhoods in Seattle’s Capitol Hill district.

This tweet was posted *after* the CHAZ murders https://t.co/QEv7ciOYI4

Several people, including three minors, were gunned down at the location.
In a tweet, GoFundMe promoted the CHAZ/CHOP: “In a community with no police, this farmer is feeding people & bringing them closer together.”
The organization linked to a Bloomberg Quicktake video about revolutionary gardening – an endeavor that was widely mocked on social media after videos and pictures showed a “garden” being planted by CHAZ/CHOP “residents” who spread cardboard on turf with soil above it.

In a community with no police, this farmer is feeding people & bringing them closer together.

Crucially, GoFundMe has supported violent, illegal movements such as CHAZ/CHOP but has cited “police reports of violence and other unlawful activity” and its policies against “violence and harassment” as its reason for seizing the Freedom Convoy’s crowdfund.

Finally, the Canadian government is using the people’s own money against them in attacking the protesters. 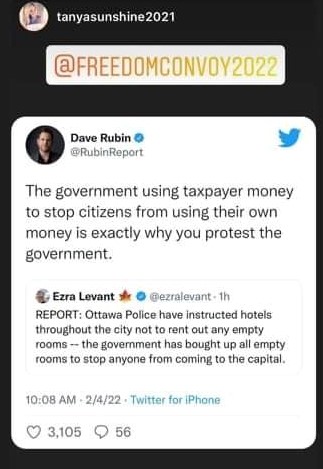 If you still want to support and can get to the page, click here.

They have already raised nearly $1.2 million.

Kate Shemirani: The Disease Process & Those Who Blazed The Trail In Dietary Healing (Video)