If this doesn’t scream desperation to shut the mouths, and the horns, of Canadian patriots, nothing will. On Monday, an injunction was issued against those gathered in downtown Ottawa from honking their horns.

An Ottawa judge has granted an interim injunction seeking to silence the honking horns that have plagued residents of downtown Ottawa for the past 11 days.

“Tooting a horn is not an expression of any great thought I’m aware of,” said Justice Hugh McLean during a court hearing in Ottawa Monday.

The temporary injunction order is effective immediately and is meant to silence the horns at all hours for the next 10 days.

Lawyer Paul Champ said air horns and train horns are blasted at sound levels of 105 to 120 decibels for prolonged periods and can cause permanent hearing damage.

“Every hour this goes by, there is harm to the people of Centretown,” he told the hearing.

Keith Wilson, a lawyer representing three protest organizers named in the suit, argued that his clients — Tamara Lich, Benjamin Dichter and Chris Barber — are not personally responsible for the noise.

He also said that what Ottawa is experiencing is a grassroots protest against pandemic measures.

“There is more evidence before you that downtown Ottawa residents don’t feel they’re being harmed and this is part of the democratic process,” he said.

The judge said that while the participants have a right to protest, taking their horns away would not rob them of that right.

The request for an injunction came out of a proposed class-action lawsuit filed with the Ontario Superior Court of Justice on Friday by lawyer Champ on behalf of his client Zexi Li, a 21-year-old public servant.

It sought an injunction prohibiting the defendants, or any other participant in the anti-vaccine mandate convoy protest, from using vehicle horns in the vicinity of downtown. The original motion called for the injunction to cover the zone north of the Queensway, the city’s main east-west artery.

McLean said the final wording of the order will be shared with media.

The court is adjourned until Feb. 16.

So, we have one woman, notably a public servant, upset and filed a lawsuit against people who weren’t even involved in horn blowing? And the judge goes along with it? What does it even mean to protest? And look, at this 10 days nonsense. It’s clearly meant to dampen their spirits and force them into more compliance.

Take a look at the woman and ask if there is any sort of political motive to what she is doing. 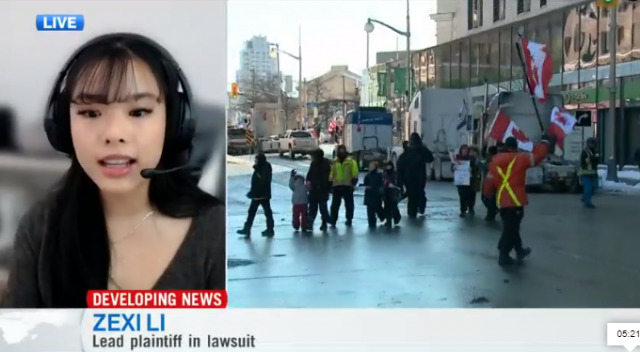 “Some people have to leave their homes because they can’t stand the noise, and it’s really torture for us,” Lee said in an interview on Monday. “We won’t keep silent anymore because people need to understand that this Ordinary people do real harm.”

Lee said she filed the lawsuit because she wanted her community to be heard, and while she understands that not everyone in the convoy is bad, they occupy the streets “to create an environment for hatred, violence, and danger and fear in general.” She said. “The residents of Midtown should not suffer collateral damage from this demonstration,” said Mr.

Li told the Freedom Team that they had every right to protest, but their actions hurt businesses, residents, animals and children.

“I have witnessed countless violations, many with impunity and disrespect for local residents,” she said.

Ah, yes! Children. I wonder if Ms. Li is concerned for children regarding the experimental COVID shot. I wonder if she is worried about the mental and physical health of children being mandated to put a mask over their face. Probably not.

While some businesses may suffer, they didn’t seem to mind the tyranny of government to force them into the COVID cult, did they? Nope.

This guy right here has it right.

“You are have a problem with honking? We are having a problem being banished from society.” pic.twitter.com/7vvo83wTXm

Of course, come Monday morning, it seems the people are silent with their horns.

#BREAKING As of midnight tonight, police will be cutting off the fuel supply to convoy/occupation supporters. Anyone bringing gas, diesel &/or propane will be charged with “assisting an illegal activity.”

These are part of the same kabal that are out in the streets robbing the truckers and supporters of necessary fuel and now threatening to arrest those that bring fuel into the area and charge them with “assisting an illegal activity.”

#BREAKING As of midnight tonight, police will be cutting off the fuel supply to convoy/occupation supporters. Anyone bringing gas, diesel &/or propane will be charged with “assisting an illegal activity.”

Pastor Artur Pawlowski has warned that it will get worse before it gets better. He exhorts his fellow countrymen to hold the line in the face of tyranny.

Imagine William Wallace being told to silence the bagpipes…

This is the same thing. It’s nothing more than tyrants attempting to silence their opposition, and I ask, what has compliance with tyranny gotten any of us but more tyranny?

Did The Department of Defense Bury Data On COVID Shot Injuries To Continue Murdering US Troops? (Video)