This troubling number underscores what is happening in the markets: $63 billion fleeing mutual funds just in the past three months.

It represents another sign that zero percent interest has screwed over the real economy.

Rather than “growth” in the form of money pouring into investments, we are seeing a flight from markets as stocks don’t operate as investments, but as zero percent “shares” in the confidence that the Federal Reserve will prevail in some mission to restore monetary integrity.

Whatever was left of that confidence faded away after Janet Yellen’s queasy speech on what she suggests may be eventual changes in the interest rate within a year. The market turned its stomach a bit, hanging on her uneasy words, but breathed and stood up straight again. At least she said somethingabout what to expect.

But the real system has calcified, and the Federal Reserve has revealed itself to be gigantic enough to have true gravity in the markets, and yet is unable to restore sanity to markets or value to investors. You are on your own, and the market is at a point of dangerous, even apocalyptic, turbulence and volatility. The beast is sick, and the virus has become immune to the treatment. They can stop the hurl, but they can’t cure the disease.

Hence, investors are understandably uncertain, and exodus from the market is obious.

King World News reports that “frightened investors withdrew a staggering and near Record $63 billion out of mutual funds in the past 3 months.”

According to the story, there is a:

Staggering amount of withdrawals by frightened investors out of mutual funds in the past 3 months as panic recently began to engulf the world.

Jason Goepfert at SentimenTrader:  “Investors fled U.S. mutual funds in August. Domestic funds suffered more than $60 billion in outflows over the past three months, among the most severe redemptions in thirty years. As a percentage of total assets, the damage wasn’t as bad but still ranks as extreme (see chart below). 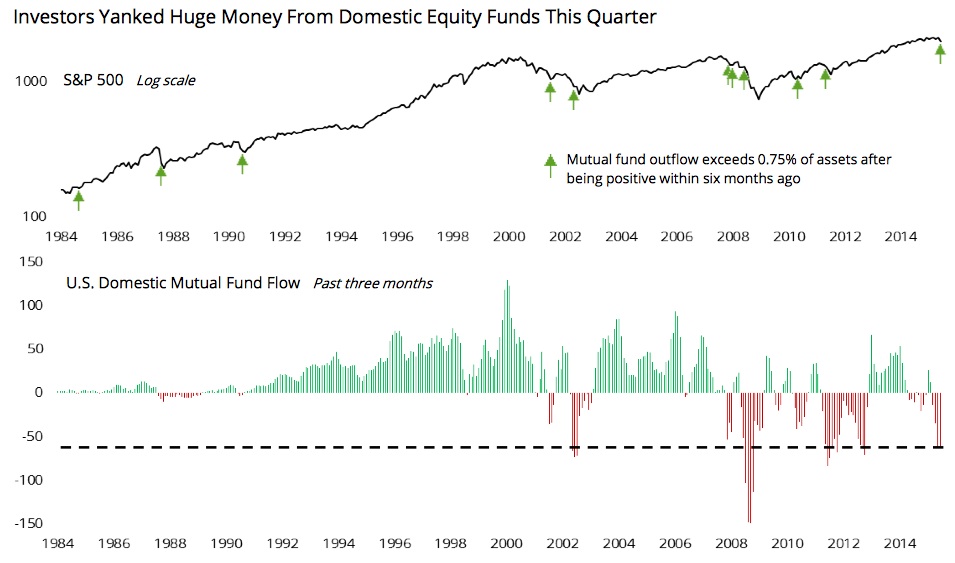 So the markets really are balking at the potential for another global financial meltdown.

There could be real trouble ahead.