Home»Economy»Is It Just A Coincidence That The Dow Has Hit 20,000 At The Same Time The National Debt Is Reaching $20 Trillion?
Economy

Is It Just A Coincidence That The Dow Has Hit 20,000 At The Same Time The National Debt Is Reaching $20 Trillion?

The Dow Jones Industrial Average provides us with some pretty strong evidence that our “stock market boom” has been fueled by debt.  On Wednesday, the Dow crossed the 20,000 mark for the first time ever, and this comes at a time when the U.S. national debt is right on the verge of hitting 20 trillion dollars.  Is this just a coincidence?  As you will see, there has been a very close correlation between the national debt and the Dow Jones Industrial Average for a very long time.

For example, when Ronald Reagan took office in 1991, the U.S. national debt had just hit 994 billion dollars and the Dow was sitting at 951.  And as you can see from this chart by Matterhorn.gold via David Stockman, roughly that same ratio has held true throughout subsequent presidential administrations… 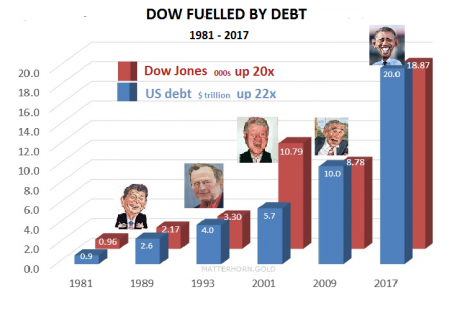 During the Clinton years the Dow raced out ahead of the national debt, but an “adjustment” during the Bush years brought things back into line.

The cold hard truth is that we have been living way above our means for decades.  Our “prosperity” has been fueled by the greatest debt binge in the history of the world, and we are greatly fooling ourselves if we think otherwise.

We would never have gotten to 20,000 on the Dow if Barack Obama and Congress had not gotten us into an extra 9.3 trillion dollars of debt over the past eight years.

Unfortunately, most people do not understand this, and the mainstream media is treating “Dow 20,000″ as if it is some sort of great historical achievement…

The average began tracking the most powerful corporate stocks in 1896, and has served as a broad measure of the market’s health through 22 presidents, 22 recessions, a Great Depression, at least two crashes and innumerable rallies, corrections, bull and bear markets. The blue chip reading finally cracked the 20,000 benchmark for the first time early Wednesday.

During the current bull market, the second longest in history, the Dow has more than tripled since March 2009.

And it took just 64 calendar days for the Dow to go from 19,000 to 20,000.  That is an astounding pace, and financial markets around the rest of the planet are doing very well right now too.  In fact, global stocks rose to a 19 month high on Wednesday.

So where do we go from here?

Well, if Donald Trump wants to see Dow 30,000 during his presidency, then history tells us that he needs to take us to 30 trillion dollars in debt.

Of course that would be absolute insanity even if it was somehow possible.  Each additional dollar of debt destroys the future of our country just a little bit more, and at some point this colossal bubble is going to burst.

But you can’t tell most of the “financial experts” these things.  Most of them simply believe that the “market always goes higher over time”…

The “market always goes higher over time,” Todd Morgan, chairman of Bel Air Investment Advisors. “The lesson here is that through wars, recessions, elections, impeachments, financial crises, and on and on, investing for the long term in high-quality stocks is the key to building wealth. … We are telling our clients that you can’t time the market. Think long term. Stay the course. We expect the market to see Dow 30,000 in my lifetime, and for my grandchildren to see Dow 50,000 in their lifetime.”

My hope is that the market will continue to go up.  But nobody can deny that valuations are already at absurdly high levels, and the only way that this party can keep going is to continue to fuel it with more and more debt.

But for the moment, there is a tremendous amount of optimism out there, and most experts expect the Dow to continue to set new highs.  In fact, CNBC says that whenever the Dow crosses a new threshold like this it usually means good things for investors…

CNBC looked at market data from the past 30 years and zeroed in on the times when the Dow has crossed levels like 2,000, 3,000, 4,000 … all the way up to the 19,000 level it hit in November. At those times, investors can typically expect traders to push it up even higher, according to data from Kensho. Not only does the Dow go up, but it outperforms the S&P 500 index along the way.

But as USA Today has explained, not all Americans are benefiting from this stock market rally…

The breakthrough came just four trading days into Trump’s presidency, a whirlwind in which the billionaire has reaffirmed his commitment to strengthen the U.S. economy and create more jobs and higher wages for workers. Still, nearly half of Americans have not benefited from the so-called “Trump Rally,” which has generated more than $2.2 trillion in paper gains for the Wilshire 5000 Total Stock Index since Election Day. The reason: only 52% of Americans polled by Gallup last April said they “have money invested in stocks” — the lowest stock ownership rate in the 19 years Gallup has tracked the data and down sharply from 65% in 2007 before the financial crisis.

Hopefully the good times will continue to roll for as long as possible.

But there is no possible way that they can keep going indefinitely.

For decades, our debt has been growing much faster than our GDP has.  By definition, this is an unsustainable situation.  At some point we will have accumulated so much debt that our financial system will no longer be able to hold up under the strain.

Many were convinced that we would reach that point before the U.S. national debt hit 20 trillion dollars, and yet here we are.

So how much higher can we go before the bubble bursts?

That is a very good question, and I don’t know if anyone has the right answer.

But for President Trump, this is going to present him with quite a dilemma.

Either he can keep the debt party going for as long as possible, or he can try to get us to take some tough financial medicine right now.

If an attempt is made to deal with our debt problems now, we will experience severe economic pain almost immediately.

But if the can keeps being kicked down the road, our long-term prognosis is just going to keep getting worse and worse.

And if we try to delay the inevitable indefinitely, at some point the laws of economics are going to make our hard choices for us.

Is It Just A Coincidence That The Dow Has Hit 20,000 At The Same Time The National Debt Is Reaching $20 Trillion?