Home»World»How Much of a Nuclear Threat is North Korea Really?
World

How Much of a Nuclear Threat is North Korea Really?

We all like to scoff at that crazy little dictator, Kim Jong Un, who is a walking caricature, putting himself on the cover of a magazine as the sexiest man alive and talking smack like a WWF champ. But, in all seriousness, is North Korea actually a threat?

Unfortunately, it looks like the answer to that question is yes…and they’re turning into a bigger one each year.

Despite the buffoonery of their Dear Leader, the threat of North Korea is growing rapidly, according to the US Intelligence community. When prepping for a nuclear strike becomes the officially recommended course of action, it is time to pay attention.

(What you do in the minutes after a detonation could save your life. Learn what to do in the event of a nuclear strike here.)

They have successfully tested an ICBM that could carry a nuke.

The US military Defense Intelligence Agency says that by sometime in 2018, North Korea could have an intercontinental ballistic missile (ICBM) with the ability to transport a nuclear warhead.

They’re basing this on a recent successful test of such an ICBM.

“This test, and its impact on our assessments, highlight the threat that North Korea’s nuclear and ballistic missile programs pose to the United States, to our allies in the region, and to the whole world,” the DNI’s National Intelligence Manager for East Asia, Scott Bray, told CBS News on Tuesday, adding that the U.S. intelligence community was “closely monitoring the expanding threat from North Korea.” (source)

Currently, Alaska, part of Canada, and Hawaii are within range.

Right now, experts don’t believe that North Korea could transport a nuclear warhead to the US mainland, however, Alaska and Hawaii are at risk. Hawaii would be a particularly valuable target, as it is the home of the US Pacific Command.

This image shows the current reach of different missiles that we know they possess. 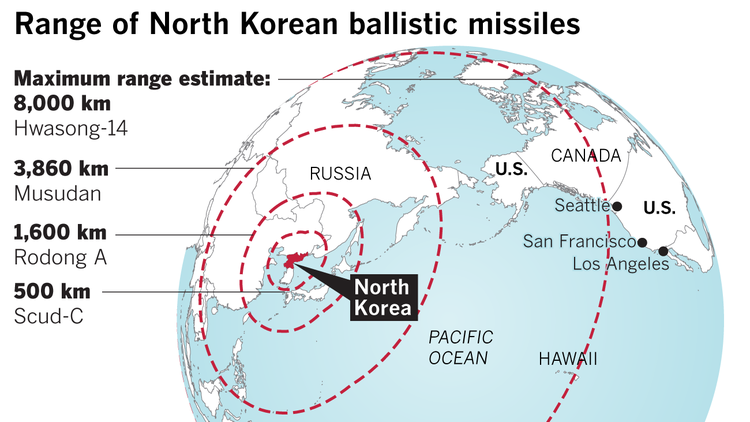 However, they’re making rapid progress, and experts believe that by sometime in 2018, they’ll have the capability of striking the West Coast, with its large population centers in Seattle, Los Angeles, Portland, and San Francisco.

UPDATE: Two days after the publication of this article, North Korea successfully tested a missile that could reach as far as LA, Denver, and Chicago. This has changed the situation drastically, as now, half of the US mainland is in the nuclear range of North Korea. Get the details here.

The US State Department has advised American citizens against visiting North Korea.

In the immortal words of my daughters in their pre-teen years, “Duh.”

Although I personally can’t understand why anyone would want to travel to North Korea, especially after what happened to that poor young man, Otto Warmbier, it appears that thousands of people vacation there every year. 95% of the visitors are from China and about 75% of the visitors are male. About 800 Americans per year make the trip.

Being part of an official tour won’t help Americans if they are found with anything in their possession that is critical of North Korea, and there is no consulate there to rescue you. Some of the things that are illegal in North Korea and punishable by labor camps or death are:

Personally, I’d rather go just about anywhere on the planet than North Korea, but that’s just me.

What preparations are being made for a potential attack?

First, the US recently tested defense technology and successfully shot down a simulated, incoming intermediate-range ballistic missile (IRBM) similar to the ones used by North Korea. The simulation took place over the Pacific Ocean in July:

The test was the first-ever of the Terminal High Altitude Area Defense (THAAD) system against an incoming IRBM, which experts say is a faster and more difficult target to hit than shorter-range missiles.

The US Missile Defense Agency said the IRBM was designed to behave similarly to the kinds of missiles that could threaten the US.

“The successful demonstration of THAAD against an IRBM-range missile threat bolsters the country’s defensive capability against developing missile threats in North Korea and other countries,” the Missile Defense Agency said in a statement. (source)

Finding themselves particularly in the crosshairs of North Korea, Hawaii has been openly working to prepare citizens for the potential of an attack. They’ll be testing an attack warning system in November.

A “guidance summary” from the Hawaii Emergency Management Agency says residents will be alerted of nuclear detonation through siren alarms and flashing white lights. An Emergency Alert System will broadcast over television and radio frequencies as well. (source)

The state has released official guidelines on surviving a potential nuclear attack. (This is useful information no matter where you live.)

Matthew LoPresti, a legislator in Hawaii has been a strong advocate of the preparations.

“People think everybody would perish, but that is not the case. It would be a mass casualty event, but most people would survive. If you don’t take steps, more people will lose their lives.” (source)

A dear friend of mine living in Hawaii recently attended a public meeting informing citizens about getting prepared for the potential of an attack. Citizens were told that an official response could take a while, and to plan to be completely on their own for up to a month. (Gosh, sounds familiar, right?) These meetings have been taking place all over the state as the local government urges residents to be prepared for a disaster, a shut-down of services, and a complete halt to any merchandise of food being shipped into the islands.

They aren’t the only ones preparing. Los Angeles California is also making preparations for the potential of an attack, even though the technology is not expected to be advanced enough to reach them right now.

Fleets of big black trucks, harbor boats and aircraft, equipped with radiation sensors and operated by specially trained law enforcement teams, are ready to swing into action in Los Angeles for a catastrophe that nobody even wants to think about: a North Korean nuclear attack…

“We monitor events all over the world and assess whether there is something that could impact us here,” said Capt. Leonard McCray, commander of the emergency operations bureau at the Los Angeles County Sheriff’s Department. “North Korea is clearly one of them.”

As tension rises, the inevitable question is: How well prepared are Los Angeles and other U.S. cities for a nuclear strike? The answer is somewhat unexpected. After two decades of fighting terrorism, law enforcement agencies and the federal government today are better equipped and trained to handle the aftermath of a limited nuclear attack than they ever were during the Cold War. Yet generations of Americans have grown up without learning how to protect themselves in the aftermath of a detonation. (source)

Unsurprisingly, some people object to preparing citizens for a nuclear attack.

There are several reasons that some squeaky wheels object to these wise preparations.

David Wright, a weapons expert at the Union of Concerned Scientists, says that civil defense preparations are sending the wrong message to Kim Jong Un. And Jeffrey Lewis, a nuclear weapons analyst with the James Martin Center for Nonproliferation Studies in Monterey, Calif., thinks that the Venture County Sheriff’s Department may be overreacting.

“He’s ruthless, but he’s not crazy. There’s reason to be cautious. But it’s not a reason to start digging bomb shelters.” (source)

“Everyone’s safety in Hawaii is always our top priority. However, we also know from speaking to our tourism industry partners that if reports are misinterpreted about the state’s need to prepare for an attack, this could lead to travelers and groups staying away from Hawaii. The effect of such a downturn would ultimately be felt by residents who rely on tourism’s success for their livelihood.” (source)

According to Chan, they shouldn’t be worried because an attack by North Korea “is a very remote possibility at this time.”

I applaud the preparations being made. While the reason behind it is terrible, it’s always a positive sign when people realize that they can’t always depend on the government to save them.

This article explains what to do in the event of a nuclear strike. As stressed above, if you aren’t at Ground Zero, it’s entirely survivable and it isn’t going to turn into some nuclear winter in which your surviving neighbors decide which family to cook for dinner, ala The Road.

We can scoff at North Korea as much as we want, but the fact remains that their technology is advancing extremely rapidly. Their tests are becoming more successful. And this article doesn’t even touch on the potential of an EMP, which, if detonated over the middle of the US would have a potentially devastating effect for a long period of time.

While North Korea has to know that they’ll lose in the event of a war, the vibe I get from Kim Jong Un is that he would be delighted to cause as much damage as possible on his way out.

Think about the psychology of someone who knows he is going to die anyway. When they’ve got nothing left to lose, people become dangerous indeed.

The threat is real.

United Nations Chief: The World Is Heading Into A “Wider War” KNOWINGLY

Iceland Could Be About To Experience A Major Volcanic Eruption

The U.S. Is Inches From A War With North Korea In Which Millions Could Die

How Much of a Nuclear Threat is North Korea Really?