Sabotage: 3 Doctors Witnessed Pay Off Of Kavanaugh Protesters Before Hearing

Just before the unruly outbursts that took place earlier this week at the confirmation hearings for Supreme Court nominee Brett Kavanaugh, three Texas doctors claim that they witnessed the protesters being paid off for their “services.”

The doctors were interviewed by Adam Schindler.  He tweeted out photos of what appears to be protesters being paid off.  Perhaps Vinay Krishnan, the guy paying these people off and “organizer of civil disobedience,” should be investigated and the Soros-funded group he works for, Center for Popular Democracy, should be investigated for engaging in paying people to be provocateurs should be shut down.

This same woman was then led out of the hearing and arrested, as this screenshot demonstrates.

Look who joined the party today. Contrary to @CoryBooker this was not “democracy in action”. It’s paid activism in action. Which I suppose is a certain kind of democracy. Just not the kind this #texan thinks is bennificial. #KavanaughConfirmationHearing pic.twitter.com/Viv8vui2u8

Take a look at the interview.

“One thing was there were people who had come along… who had a bag of money, and people would hand them a piece of paper, and then they would give them money,” said Dr. Tom Schlueter.  “So we know money was exchanged for some of the people to be here, just to protest.”

“The most telling thing was listening to them giving names and addresses, so when they were arrested, they were keeping a record and celebrating who got arrested, without any regard for any open discussion or even the possibility of being convinced of anything, it was just for the purpose of disruption and to have some kind of disruption of the process,” said Dr. Morton Purvis.

In all, at least 70 people were arrested during the hearing.

"Brett Kavanaugh’s nomination is a direct assault on women and we are fighting back,” said @lsarsour of @womensmarch, the first arrestee of the day https://t.co/gqTVwhDMuA

The following day, they were paying off more protesters. 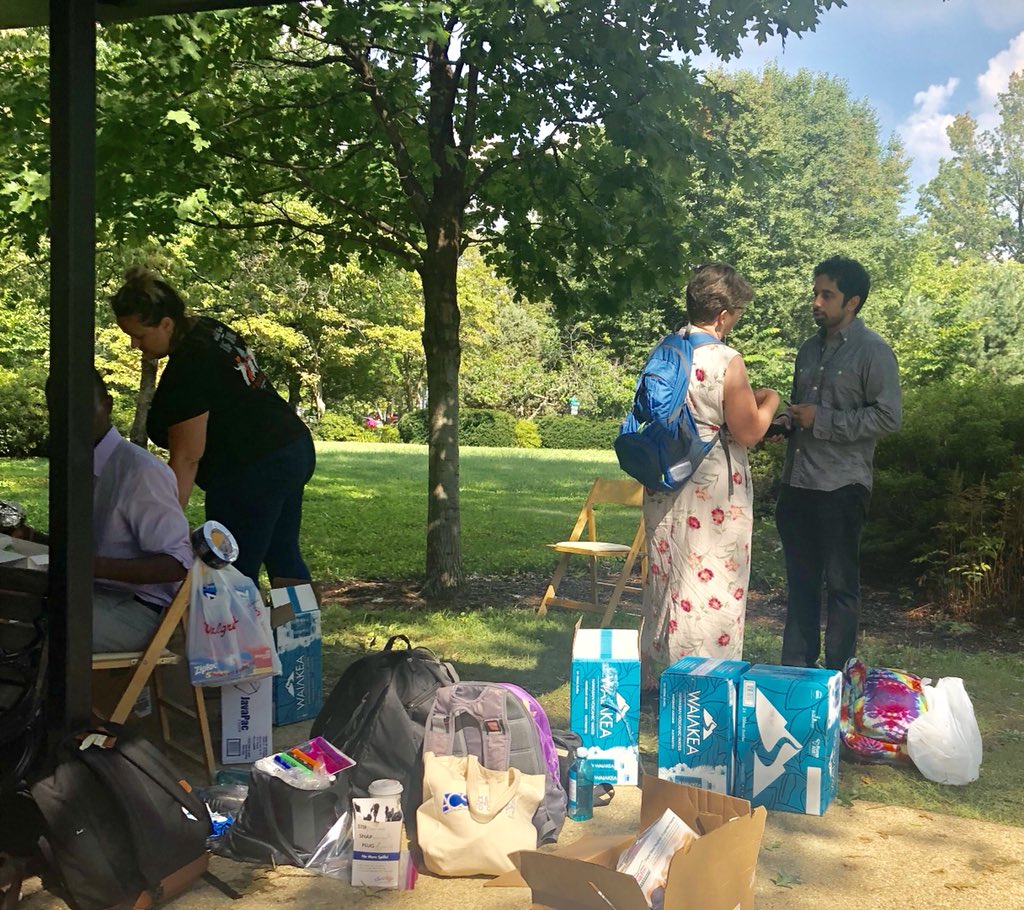 Later it was discovered that Vinay Krishnan, who was the one paying off the protesters, works for

Paid protesting has become a job for many in America today who apparently can’t get actual employment.  While Barack Hussein Obama Soetoro Sobarkah couldn’t legitimately get a job at McDonald’s because he couldn’t pass E-Verify and he sank the US economy while piling on over $10 trillion in debt, he did manage to lots of jobs in the paid protesting sector.

As protesters waited at locations across the country for President Trump to announce his nomination for Supreme Court Justice, many on social media were saying these people needed to simply, get a job. It is surprising to see that a good number of people believe these protesters are average citizens either taking time off work or are unemployed and just have the time to go out and protest.

Those of us, who have followed politics for many years, however, know that to today’s US protesters, this is their job. Unlike past street demonstrators of the 1960s and 1970s, who’d gathered to protest the Vietnam War and the US government based solely on their strong beliefs, today’s public displays of violence and civil unrest are totally carried out by well-organized businesses that have thousands of members and hire people as professional protesters. Thus, we have a massive employment sector of individuals who wake up every morning and prepare to go to work in their profession as protesters, just like the rest of us who do the same at our legitimate jobs.

The hours can be a bit rough for the employees of the protest industry as you are required to work at various hours of a 24 hour period, sometimes having to attend multi protests per day, or participating in sit-ins that may last a week or more.

The pay isn’t that bad for an average protester who makes anywhere from $15.00 to $20.00 per hour. One can move up in the company as well, based on loyalty, promptness, and the willingness to go beyond the call of duty by engaging in physical confrontations, these employees can earn as much as $1,500 a week.

It may surprise you to know that employees of the protest industry also get company benefits, such as health insurance, 401Ks, and various retirement plans, like the rest of us.

Since Organizing For Action is the literal corporate headquarters from which all other splinter protest groups like BLM and ANTIFA are a part, we see that literally over a million people are employed in the protest industry. Since Barack Obama founded OFA, along with financing from George Soros, we know who is the president of the company and where it gets its money.

In a way, Obama was right in saying he created all the jobs he claimed he did.  He did so by creating a totally new industry in America:  the business of political protesting.

More and more, we are seeing fake protests by none other than paid actors.  These people don’t even necessarily know what they are protesting or what they are standing for except the almighty dollar.

History Repeating Itself: America’s Version of the Gestapo Found Within the Ranks of the FBI – Raids Pro-life Advocates’ Home

The Dialectical Theater of The Kavanaugh Confirmation

Sabotage: 3 Doctors Witnessed Pay Off Of Kavanaugh Protesters Before Hearing