“In many ways, the voluntary measures we put in place in Sweden have been just as effective as complete lockdowns in other countries,” Anders Tegnell, the chief epidemiologist at Sweden’s public health agency,

Sweden is a case study in what to do next time. Their results are eye-opening Lockdowns, destroying our economy, millions unemployed, neighborhood Stasi, Covid Karens, — not necessary.

It’s what the rational among us have been reporting for months.

“That Sweden has come down to these levels is very promising,” state epidemiologist Anders Tegnell told reporters in Stockholm on Tuesday.

The Health Agency of Sweden says that since hitting a peak in late June, the infection rate has fallen sharply. That’s amid an increase in testing over the period. “The curves are going down and the curves for the seriously ill are beginning to approach zero,” state epidemiologist Anders Tegnell said.

While novel coronavirus cases have spiked across several parts of Europe, including Spain, France, Germany, Belgium and the Netherlands, Sweden—where a countrywide lockdown was never issued—continues to report a downward trend in new cases and new deaths.

……the infection rate has fallen sharply. That’s amid an increase in testing over the period. “The curves are going down and the curves for the seriously ill are beginning to approach zero,” Tegnell said. 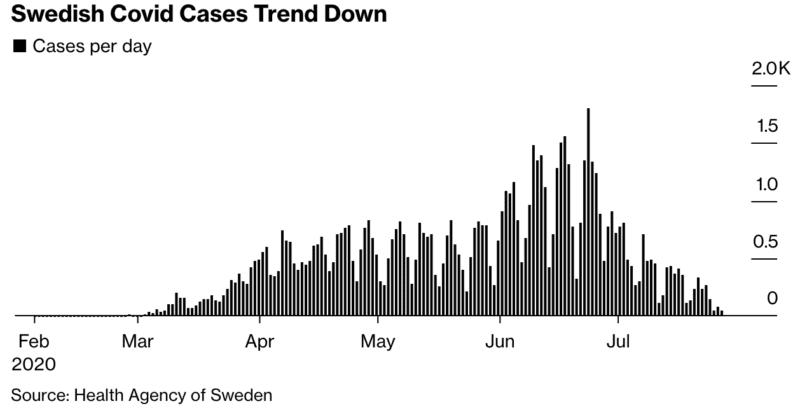 The development follows months of controversy over Sweden’s decision to avoid a full lockdown. The unusual strategy coincided with a much higher Covid-19 mortality rate than elsewhere in the Nordic region. Per 100,000, Swedish deaths even exceeded those in the U.S. and Brazil.

I Looked Up What Happened When Sweden Refused To Shut Down – They Were Right, We Were Wrong

The Nordic country defeated COVID-19 without seeming to break a sweat — fever-induced or otherwise. They effectively showed that Fauci & Co. were completely wrong about a shutdown being necessary to save civilization as we know it.

While that accomplishment should be lauded and their efforts duplicated around the world, the media has instead chosen to blast the Nordic state and paint a dismal picture that simply doesn’t exist.

A few examples (among many, many others) are below:

CBS News declared: “Sweden becomes an example of how not to handle COVID-19.” Similarly, the University of Virginia Health System issued a news release titled: “Lack of Lockdown Increased COVID-19 Deaths in Sweden.”

Finally, Business Insider reported: “Sweden’s coronavirus death toll is now approaching zero, but experts are warning others not to hail it as a success.”

It’s all awfully prickly from a leftist media that used to adore Sweden’s welfare state. The reason for the barbed headlines is simple — Sweden dealt with COVID-19 in its own way.

The country didn’t truckle to the tyranny of over-educated, under-experienced experts. It didn’t implement authoritarian policies designed as much to break spirits as to break the pandemic. And it didn’t turn its voters into quasi-prisoners.

In other words, Sweden responded more or less the way the rest of the developed world has responded to contagious diseases until 2020, which just happens to also be President Donald Trump’s re-election year.

What were Sweden’s results?

All around the country, the U.S. tried just about every imaginable combination of mask, lockdown, quarantine, curfew and closures orders — up to and including literally refusing entry across some state lines to certain fellow Americans.

The results were, well, not what anyone wanted. As of Saturday, the U.S. coronavirus death rate was 3.35 new deaths per million per day (based on a seven-day rolling average), which ranks as the 11th worst rating on the planet, according to Our World in Data.

And remember, thanks in large part to the Andrew Cuomo nursing home/death camp model of virus containment, New York state accounts for more than a fifth of all U.S. COVID-19 deaths, according to Johns Hopkins data. So we’re probably getting dragged down a little in the ratings by the disproportionate number of deaths in that state.

What else has America’s scattershot, but mostly heavy-handed, response yielded? If you read The Wall Street Journal, you will learn it led to anywhere between 30 million and 40 million lost jobs. (Some of those workers have no doubt been rehired as parts of the economy reopen, but millions more haven’t. And economists don’t really know how many of those job losses are permanent.)

So we destroyed constitutional rights, shed a few dozen million jobs and watched tens of thousands of people die. Oh, and we turned Americans against each other, all the way from the state to family levels.

But at least gross domestic product didn’t take it too hard, right? Not exactly. Commerce Department numbers released Thursday revealed that the U.S. economy shrank by a record 32.9 percent last quarter in what Bloomberg called the “sharpest downturn since at least the 1940s.”

So what about those rebellious Swedes? The ones who refused to play ball with all-knowing scientists and a ridiculously tunnel-visioned medical establishment?

While much of the rest of the developed world drowned themselves in hand sanitizer, locked ankle monitors onto their citizens and bought super cute masks on Etsy, the stalwart Swedes pressed on.

They lived their lives.

They didn’t mandate masks. They didn’t turn into NKVD-aspiring Karens, eager to publicly shame or quietly narc on neighbors, friends and family who dared bare an uncovered nostril.

Sweden defied the (dare we say) scientific consensus and has performed exceedingly well compared to the U.S.

As of Saturday, Sweden had registered 0.65 deaths per million per day, based on a seven-day rolling average.

Trading Economics projects a second-quarter GDP change of -4.2 percent (and a third-quarter growth of 2.4 percent). Depending on your preferred method of calculation, we could casually say that’s 7.8 times better than what the U.S. saw last quarter.

As of June 18, Statista forecast a 2.6 percent drop in Sweden’s employment rate for 2020. The U.S. Bureau of Labor Statistics, meanwhile, reported unemployment in the U.S. shot up 11.2 percentage points from 3.5 percent in February to 14.7 percent in April, before dropping a bit to 13.3 percent in May and 11.7 percent in June as parts of the economy reopened.

Now we’re not going to be like the dogmatic pro-mask Stasi here. There are lots of factors that impact the difference between U.S. and Swedish outcomes. We can’t say with 100 percent certainty that Sweden’s refusal to lock down saved their economy or is responsible for the miraculously low death rate.

We can all learn two significant lessons from how COVID-19 responses have played out in the U.S. versus Sweden.

First, it is clear that the expert class in America whom the left appeals to at every turn (aren’t you sick of hearing “scientists say” or “experts find”?) is worth substantially less than we pay them.

We’ve spent literally trillions of dollars as a result of this virus and have only managed to buy our own personal hell.

Second, Sweden succeeded using an approach that left people free. The response they got from the U.S. media complex, however, wasn’t celebration and an urge toward duplication. It was derision and aspersion.

That betrays what lays at the heart of everything COVID-19-related.

In America, COVID-19 has never been first and foremost a virus to fight. It has instead been a tool that the left, anti-Trumpers and the establishment could use to mercilessly kick Americans in our collective groin.

With COVID-19, the left finally found a chink in Trump’s armor. The left knew exploiting it was vital, and they knew that Americans would have to suffer if they wanted to succeed.

As America continues to languish economically even as deaths drop, remember to thank the left for that.

All Across The Earth, Protests Against 5G & SpaceX Satellites – March 19 & 20

Europeans Are Waking Up to Government Covid Tyranny - Why Are We Still Asleep?