There is no doubt that Bill and Hillary Clinton are at the center of a major human trafficking ring, including sex trafficking.  But how many remember a woman by the name of Laura Silsby?  Silsby, now known as Laura Silsby-Gayler was jailed for the kidnapping of 33 children in Haiti and eventually wound up working for the company that put out Amber Alerts, which were said to be notifications to warn of children who were missing or kidnapped.  However, she was provided assistance by none other than Bill and Hillary Clinton.

For some background on Silsby-Gayler, William Craddick at Disobedient Media documents not only what Silsby-Gayler did, but how the Clintons were involved and how the media was used to cover it up.

Contrary to reports in the media, the crowd sourced investigation labeled by some as “Pizzagate” did not begin with internet sleuths digging through the Wikileaks Podesta Files releases looking for pizza parlors and encoded language discussing human trafficking. It began with the shocking discovery that Hillary and Bill Clinton provided assistance to convicted child trafficker, Laura Silsby, resulting in a reduced sentence for child trafficking.

Silsby was arrested at the Haitian border attempting to smuggle 33 children out of Haiti without documentation. Her sentence and charges were reduced after an intervention by Bill Clinton. In the aftermath of Silsby’s arrest, her originally retained lawyer Jorge Puello was arrested in connection with an international smuggling ring accused of trafficking women and minors from Central America and Haiti. The revelation of this news in November was either ignored by the Western media or attacked by Clinton controlled publications.

I. Hillary Clinton Intervened Politically on Behalf of Laura Silsby

Laura Silsby is the former director of The New Life Children’s Refuge. Emails from her organization can be found in Wikileaks’ Hillary Clinton Email Archive discussing the NGO before her arrest. Silsby’s organization also appears in Clinton’s emails, soliciting donations for their “ministry.” The Refuge was founded by Silsby and Charisa Coulter, both attendees of the Central Valley Baptist Church in Meridian, Idaho. Silsby was reported to have a history of bad debts and unpaid wages.

Laura had claimed she planned to build an orphanage in the Dominican Republic, but a State Department diplomatic cable revealed that authorities in the country said she never submitted an application for this purpose. They instead located to Haiti.

On January 29, 2010, Silsby was arrested with nine other American nationals attempting to steal 33 children from the country, most of whom were not even orphans and had families according to some reports. CNN reported on February 9, 2010 that this was not the first time Silsby had attempted to traffic children out of Haiti. Haitian police acting on a tip had intercepted Silsby in an earlier, separate attempt to remove 40 children out of the country. She was turned back at the Haitian border. For a brief period, Haitian authorities were considering adding a new kidnapping charge based on this evidence.

Hillary and Bill Clinton took an extraordinary interest in Silsby’s case from the moment she was arrested and almost immediately stepped in on her behalf. The Harvard Human Rights Journal stated that one of Bill Clinton’s first acts as special envoy for the United Nations in Haiti “was to put out the fire of a child abduction scandal involving American citizens.” On February 7th, 2010, The Sunday Times reported that Bill Clinton had intervened to strike a deal with the Haitian government, securing the release of all co-conspirators except for Silsby. Prosecutors ultimately sought a six-month sentence in Silsby’s case, reducing charges for conspiracy and child abduction to mere “arranging irregular travel.” A shockingly light penalty given the circumstances of her arrest, which would likely not have been possible but for the intervention of the Clintons in Silsby’s case.

On February 9th, 2010 Hillary Clinton consulted with Counselor Cheryl Mills and other attorneys in an email discussing the U.S. Government’s “options” regarding the arrested Americans. The heavily redacted memo attached to that email does not reveal what these “options” consisted of. However, the State Department’s American Citizens Services is only authorized to offer lists of local, English speaking attorneys to Americans arrested or detained abroad. To go beyond that authorization is a severe violation of protocol and is illegal. Additional emails reveal that the State Department was involved with making statements on the Silsby scandal and preparing to assist Silsby’s co-conspirators with their return to the United States, although this is consistent with State Department protocol in these situations.

II. Silsby’s Lawyer and His Wife Were Both Arrested For Involvement in Human Sex Trafficking of Minors and Women

On February 11th, the New York Times reported that Silsby’s original lawyer, Jorge Puello, was suspected of leading an international human trafficking ring involving women and minors. According the the Harvard Human Rights Journal, Puello was ultimately arrested in an investigation being lead by U.S. Immigration and Customs Enforcement (ICE) and Homeland Security Investigations (HSI) in connection with the ring. He was wanted in the United States, El Salvador and Costa Rica for his involvement with a network trafficking Central Americans and Haitians.

At the time of his arrest, his wife was already imprisoned in El Salvador and “faced charges of presumed sexual exploitation of minors and women.” Puello was ultimately sentenced to three years in federal prison for “alien smuggling.” Another surprisingly light sentence given the original charges he was sought for. It it not known at this time whether or not Laura Silsby was associated with Puello’s criminal enterprise.

III. The Daily Beast Engaged in an Illicit Cover Up Operation of the Above Information

On November 3rd, 2016, this author made a post to Reddit containing preliminary research and information on the above story. The post was made to the pro-Trump subreddit r/the_donald due to the forum’s reputation as the only outlet on Reddit where news was not being censored during the U.S. Presidential Election. The same day, Wikileaks tweeted a link to the Reddit post labeling it as a “significant, if partisan, find.”

On November 4th, 2016 The Daily Beast wrote a non-factual and intentionally misleading article covering the Clinton-Silsby scandal. They accused Wikileaks of publicizing a “Reddit conspiracy theory” which was “riddled with incorrect information.” The author, Ben Collins neglected to do basic research on the totality of the links presented in the post as evidence. Mr. Collins attacked the policies of r/the_donald towards freedom of speech and accused the forum of being racist without citing extensive or definitive proof. At no point did The Daily Beast provide proof that the allegations were not true, and did not disprove any of the evidence submitted. A link to an extensive study of the case by the Harvard Human Rights Journal which clearly linked Bill Clinton to the scandal was totally ignored. They similarly failed to acknowledge or address emails published by Wikileaks between Hillary Clinton and her legal counsel which may potentially indicate that she violated State Department policy for the treatment of U.S. citizens arrested or detained abroad.

The Daily Beast is a holding of American media conglomerate InterActiveCorp. Chelsea Clinton, Vice President of the Clinton Foundation and daughter of Hillary and Bill Clinton, sits on InterActiveCorp’s Board of Directors. The proximity of the Clinton family to the organization responsible for oversight and direction of The Daily Beast raises questions about the publication’s journalistic independence and their commitment to factual and ethical reporting on current events and topics of public interest. Given their slanderous and incorrect reporting on the Clinton-Silsby scandal, it seems clear that they do not hold these values in high regard.

Since her release from detention in Haiti, Laura Silsby has returned to Idaho. In 2015, she married and took the last name Gayler. Silsby is currently employed by software company AlertSense as their Vice President of Marketing. AlertSense works with the Federal Government on FEMA’s Integrated Public Alert & Warning System (IPAWS). One of IPAWS functions is to issue Amber Alerts during kidnapping events.

Update: It appears that since the time of publication, Laura Silsby-Gayler is no longer listed as a member of Alert Sense’s Leadership Team. 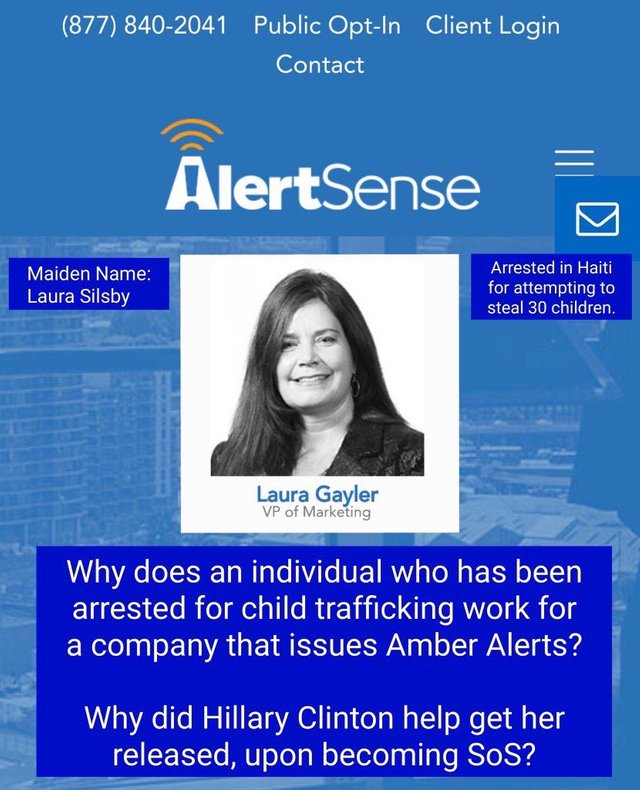 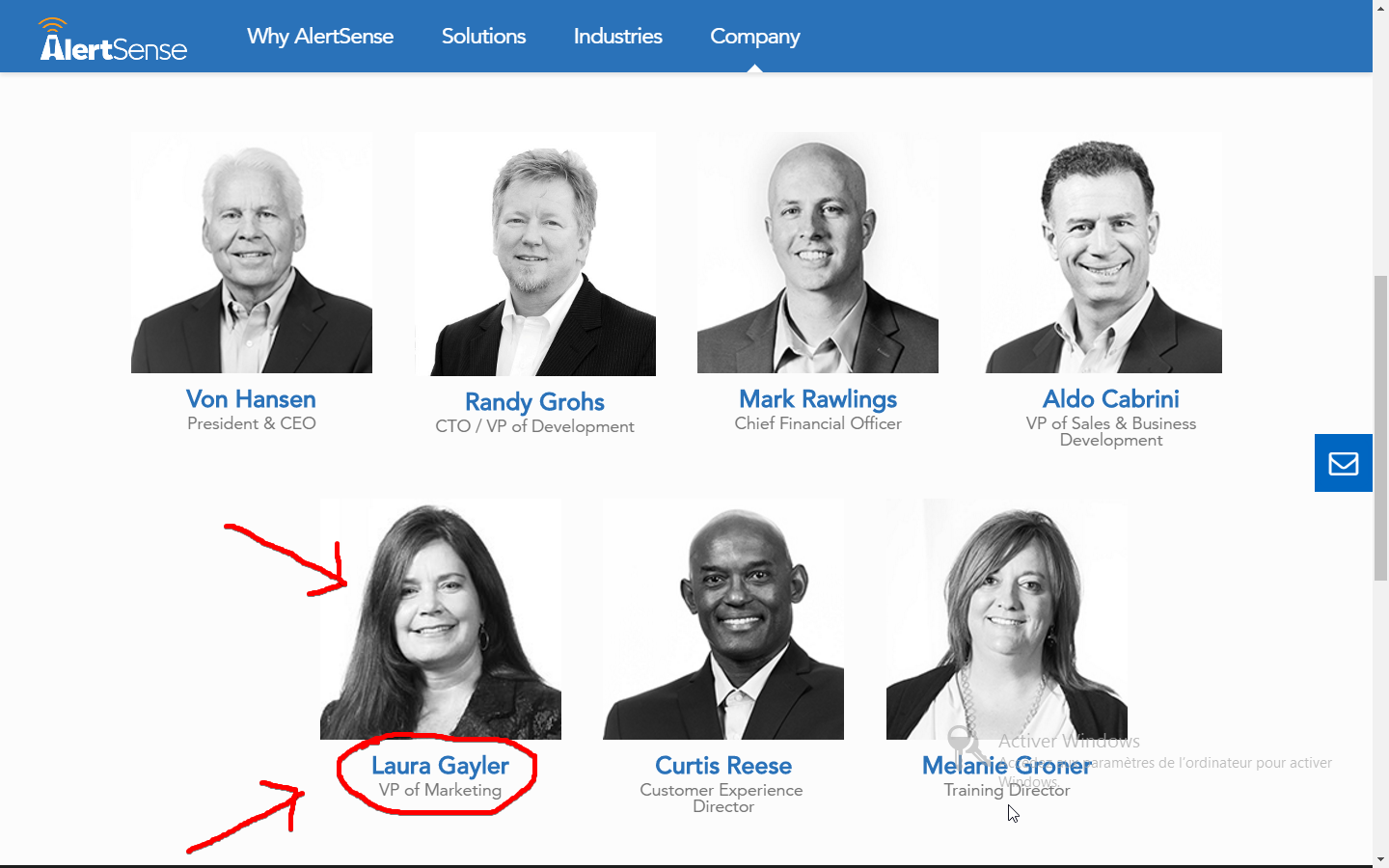 While not a part now, it is disturbing that a woman tied to the Clintons and human trafficking would be given a position in a company that puts out Amber alerts, don’t you think?  In fact, it makes any thinking person question, in light of the corrupt in Child Protective Services (CPS) being reported by Jim White at Northwest Liberty News, the validity of the Amber Alert system in the first place.  What I mean is, is it really about missing kids and kidnapping or more about parents trying to flee the system from a tyrannical, oppressive system that is seeking to steal their children?

TRENDING:  MUSLIM COP-SHOOTER Says He Did It “In the Name of Islam” But PHILLY MAYOR SAYS NO, “Does Not Represent” Islam

A link to an extensive study of the case by the Harvard Human Rights Journal which clearly linked Bill Clinton to the scandal was totally ignored. They similarly failed to acknowledge or address emails published by Wikileaks between Hillary Clinton and her legal counsel which may potentially indicate that she violated State Department policy for the treatment of U.S. citizens arrested or detained abroad.

Of course, all of this was in the Clinton emails.  As a researcher on Steemit points out:

Hillary has a LONG history of interest in Ms. Silsby. Wikileak emails dating back till at least 2001 have been found in her archives discussing Laura’s NGO. Laura had claimed she planned to build an orphanage in the Dominican Republic, but authorities in the country said she never submitted an application for this purpose. They instead located to Haiti.Sources:

Huma Abedin was constantly forwarding Hillary articles on this woman’s organization:https://wikileaks.org/clinton-emails/emailid/2772One of the first things the Clintons did when they took over the scene in Haiti was to have Bill get Laura off the hook:http://harvardhrj.com/wp-content/uploads/2009/09/King.pdf

And the attorney who represented Laura Silsby? A man who was himself convicted as a sex trafficker:https://wikileaks.org/gifiles/docs/32/323249_-os-haiti-us-legal-adviser-to-u-s-haiti-missionaries.htmlEven more disturbing, we uncovered an email in Wikileaks where they are literally pricing how much it costs to transport children:https://wikileaks.org/clinton-emails/emailid/3741

Again, this was the same group that got busted by Haitian Authorities trying to Traffic kids.https://en.wikipedia.org/wiki/New_Life_Children%27s_Refuge_case

They’re in the Clinton Emails;https://wikileaks.org/clinton-emails/emailid/3741

With that said, one wonders about the extent of the Clinton involvement and if this was the reason that Jeffrey Epstein mysteriously and allegedly committed “suicide”… or did he?  Was he elaborately whisked away never to be heard from again, or taken into protective custody to sing like a bird against those he was involved with in human trafficking?  Time will tell.

One thing is for certain, the Clintons are surrounded by people they have aided in human trafficking.  When is justice going to come knocking on their door?

Was The Corrupt Business Of Child Protective Services The Reason For The Murder Of Nancy Schaefer & Her Husband?

What Did Jerrold Nadler Say About Impeachment When Bill Clinton Was the Target?